“I’m just as passionate about duck hunting at 63 as I was at 18,” said Vic Sutek of Columbiana County’s West Township. Only one thing has changed since then: He refuses to use plastic.

He became enamoured of waterfowl in first or second grade, drawing pictures to hang on the wall. His father, Ed, was an outdoorsman who “hunted everything but ducks, but he introduced me to it,” Sutek said.

“Pretty soon that was all I wanted to do,” he said. “If it was both deer and duck season, I’d just hunt the ducks.”

It got serious in high school when he and his buddy hunted local swamps for wood ducks, mallards and teal. Every Christmas and birthday, he asked for decoys. They were usually plastic, since that was all the givers could afford.

But in his late 20s, he began to carve decoys himself, with bodies made of cork and heads of basswood. By his 30s, it was strictly wood. He’s now carved more than 100 wooden decoys that are dopplegangers of 15 of the 41 duck species.

Not too long ago, Sutek achieved one of his life goals. He’s now able to hunt over a rig of 50 decoys that he has carved himself.

The biggest blessing in his life as far as decoy carving goes was meeting the late Jim Schmiedlin of Bradford Woods, Pennsylvania, who will “go down in history as one of the greats,” he said.

Schmiedlin had all his birds on display at a decoy show, but only one left for sale. Sutek bought it and asked the artist for his signature. As Schmiedlin added his cursive to the wood, “I looked at him and asked if he needed a garden put in or his house painted,” Sutek recalls.

“I said, ‘I know you don’t give lessons, but if you’d help me with carving, I’d bust my butt to help you.'”

Schmiedlin didn’t say anything at the time, but later called and invited him over. When Sutek saw all the decoys at his house, “I knew how the guys who discovered King Tut’s tomb felt,” he said.

Schmiedlin “wouldn’t talk much. He didn’t want to give away his secrets. But he’d tell me to watch what he was doing when he carved.”

They also became hunting buddies, spending hours in layout boats watching ducks soar over Lake Erie. They did this for 10 years, until Schmiedlin died of Lou Gehrig’s Disease in 2015.

In addition to his name, Schmiedlin would write the year it was made and the places it had been on the bottom of each decoy. Sutek does the same, showing one that had been used for waterfowl hunting in California, New York and Ontario.

“Jim told me to keep that tradition going,” he said.

Decoy historians say Native Americans made lifelike duck decoys out of reeds and grasses. Settlers who were hunters learned from them, later using their woodworking skills to make decoys with species-specific characteristics. Wealthy hunters snapped them up.

By the end of the 1800s, nearly every populated area of the country had groups of carvers making wooden decoys. It wasn’t long before factories began churning them out as well, using lathes or other industrial equipment.

But local groups of hunters who couldn’t afford to buy decoys, or who preferred to do things themselves, continued to carve their own. Each group based its decoy construction on the species and the types of waterways they hunted, resulting in different styles for different regions. 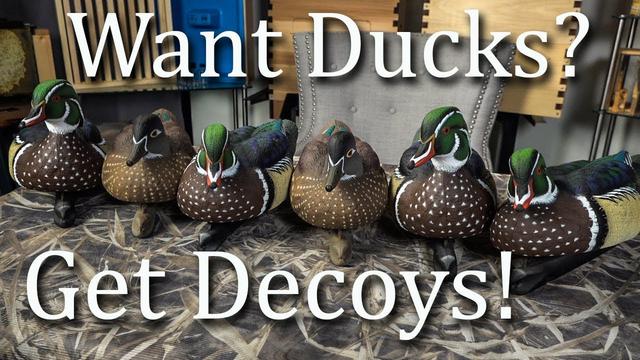 In their book Maumee Bay Decoy Carvers, authors E.E. Hale and Allan Anthony say decoy style in that area was also determined by availability of materials. The Maumee and Ottawa rivers flow into the bay through the city of Toledo.

In the early 1900s, birds following the Mississippi Flyway blackened the sky as they stopped there to rest and find food on their migratory journeys. Toledo was also the site of the largest railroad refitting yards in the region.

Starting in the 1930s, the bulky cork insulation from the inside of railroad cars was being stripped and replaced with lighter, more efficient material. Refrigeration companies were doing the same. This made for a seemingly endless supply of free cork at railroad yards or outside “cold houses.”

Hunters began to replace their old, possibly leaky wooden decoys with ones whose bodies they carved from cork and topped with heads made of pine — pine that they sometimes retrieved from downed telephone poles.

The result, the authors say, was “a real folk-art school” and “cork birds became the signature decoy for the Ohio side of the Maumee Bay” clear through the 1960s.

At the same time, their Michigander counterparts on the north shore of Lake Erie were quoted as saying: “If it ain’t made of wood, it ain’t a decoy.”

Sutek still has some of the cork decoys he carved. But for more than half his life, he has been carving the bodies out of wood — usually cedar — and the heads from softer basswood. It’s how he spends his winters, in the woodshop behind his home. “It gives me tremendous satisfaction because I can still be involved with ducks, even when it’s not duck season,” he said.

Another thing he’s gotten to do in retirement is work as a picker and a picker-upper for the Guyette and Deeter auction house. Since its founding in 1984, the company has sold more than $200 million in waterfowl decoys, paintings and related sports items.

The job can send him on trips of 1,000 miles or more to pick up items for three major auctions every year. Sutek says he is thankful that his wife, Suzanne, puts up with his sometimes last-minute trips, giving him “the opportunity to hold a 150-year-old decoy in my hands.”

The highlight of his year takes place the third week of March. This year, the combined show of the Ohio Decoy Collectors and Carvers Association and the Great Lakes Decoy Association will be March 18-20 at the Holiday Inn in Independence, Ohio, near Cleveland.

With decoys populating the hotel’s pools, there are competitions and plenty of decoys, decoratives and vintage models both for sale and just for show.

“On some of the decoys, you can see every feather; they look like they’ll fly away,” Sutek said. “A carver may have a year in a single bird.”

There will be plenty of activities for young people, including painting carvers who will spend time helping them paint their own birds. That’s something Sutek wants very much to do: Pass along the tradition of decoy carving.

“It may seem like it’s just older guys doing it, but there’s a new generation of young people who want to work with their hands,” he said. “I’m always willing to help young carvers.”

Of course, he still takes every opportunity to go hunting. In December, he traveled to Yuba City, California, where he could see the Sutter Buttes as hundreds of ducks landed on a rice field. Yet he doesn’t feel it necessary to travel long distances to practice his passion.

“What I really love is layout gunning on the Great Lakes,” he said.

Sutek says he has one life goal remaining. He hopes to go duck hunting with his grandson, Jackson, who just turned one. He may be willing to tweak certain things and explore new methods in order to make that happen. But one thing will never change.

“I’m a traditionalist with old-fashioned values,” he said.”I don’t like battery-operated spinner decoys.”

Up-to-date agriculture news in your inbox!