“That water could shoot up 20 feet into the air,” Digges said. “It’d be a lot of water suddenly and uncontrollably.”

Digges is referring to two artesian water wells in the middle of downtown San Antonio. Water flows from the wells, which are the oldest built in the city, because of natural pressure from the aquifer, providing as much as 43.2 million gallons of water a day to the immediate downtown area.

This week, after beginning to break down, the underground pumps and motor that move the water needed to be removed. From early Monday morning to Tuesday afternoon, Digges and his team carefully plugged the wells, removed the old pumps and unplugged the water.

The process stretched throughout the day and night. Any wrong move — or as Digges describes it, when you “lost a well” — could empty tons of water throughout the La Villita area. Fortunately, he said, the water stayed put — mostly, thanks to the mud.

Water under San Antonio, from the Edwards Aquifer, is under so much pressure that when engineers drilled the downtown artesian wells in 1891, water shot 20 or more feet into the air. 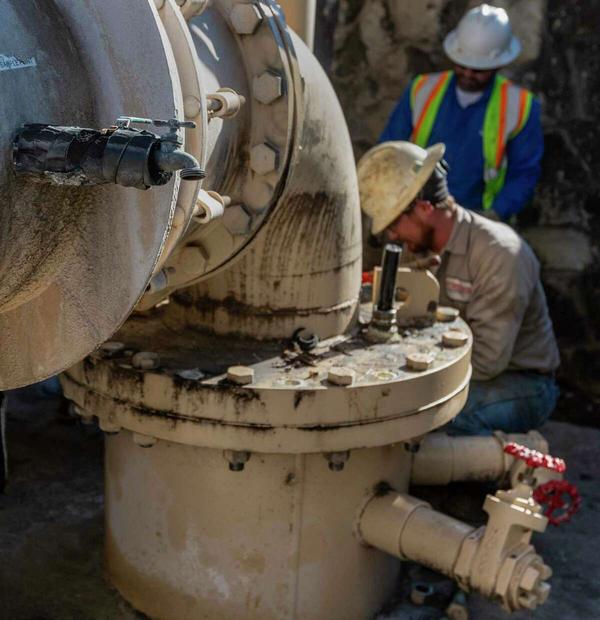 To prevent the water from surging while removing the pumps, engineers injected a substance called “clean mud” into the wells to push the water down. The SAWS team pumped 450 barrels of mud into one well and 300 barrels into the other through a well pipe coming out of the ground. The mud — which has the consistency and color of chunky chocolate milk — cost SAWS $600,000, with the total cost of operations close to $1 million.

Once the wells were “killed” with mud, Digges and his team used a massive crane to pull the old piping, pump and motor from the ground. As with a straw in a milkshake, some of the mud tries to come up with the piping, which is a big concern for SAWS. If too much mud gets pulled up with the crane, the water pressure could increase and water could shoot up.

“We want to create a negative vacuum of pressure,” Digges said. “We pack in the mud so much that the water pressure is going the other way.”

After the pipes are removed, the top of the well is sealed again and the mud is sucked back out, leaving the water alone again to flow upward. The flow will stay where it is until the pump and motor are fixed and reinstalled.

“This is all part of infrastructure maintenance,” said Anne Hayden, communications manager at SAWS. “It’s that weird, wonky word people talk about, but it’s super important to keep our water flowing in San Antonio.”

The first part of the repair was completed at about noon on Tuesday. Instruments used in the process will be cleaned, and the piping will be fixed or replaced. In the meantime, the flow will remain unattached to the 2 million-gallon water tank that provides aquifer water throughout downtown, and remain bottled up underground until it’s ready to be used again.

Other wells, including one near the Briscoe Museum and one near the AT&T Center, will keep water flowing to downtown customers for now, Hayden said. The pump and motor will be fixed by February, and this week’s process will be reversed to replace the well piping and reconnect it.

The well units were last repaired in 2008. And barring something unexpected, they should be good to go for 10 years. And the mud, vital to keep clean water flowing in San Antonio, will be discarded with more mud down the line.

Elena Bruess writes for the Express-News through Report for America, a national service program that places journalists in local newsrooms. ReportforAmerica.org. elena.bruess@express-news.net