Butte, Anaconda and Deer Lodge parents can rest a little easier knowing schools in their area have complied with or are in the process of complying with the state rule change that requires accredited K-12 schools to test their waters for lead.

Qualifying schools are required to test all fixtures, drinking fountains and sinks that people drink from, used in preparing food, or could potentially be used for drinking or preparing food, such as bathroom sinks or classroom sinks.

“Any fixture that children might use,” said Greg Montgomery, the rule manager for the lead in schools testing project at the Montana Department of Environmental Quality. He added schools aren’t required to test janitorial or utility sinks.

Even low levels of lead in children’s blood is linked to adverse effects on intellect, concentration and academic achievement, according to the Centers for Disease Control and Prevention. Lead is also harmful to adults, but experts have found it affects children more because their developing bodies absorb more lead, and their brains and nervous systems are more sensitive to its damaging effects.

Because children spend so much time at school, it’s important that they aren’t being exposed to unsafe levels there, Montgomery said.

The rule change, enacted in January 2020, requires schools to test their water levels for lead every three years or on an alternate schedule approved by the DEQ through a waiver process. The Montana Department of Public Health and Human Services made the amendment to the Administrative Rules of Montana related to school health after reviewing them and noticing what Montgomery called a “glaring omission in policy” not requiring schools to test their drinking water for lead. This was the first update to this policy since the federal Safe Drinking Water Act was amended in 1986.

Montana was one of around two dozen states that required schools to test their water for lead after lead levels in drinking water came under increased scrutiny in 2014 following the water crisis in Flint, Michigan, Montgomery said.

The water lead concentration levels in Flint homes ranged from 27 to 13,000 ppb, according to reports. The Environmental Protection Agency classifies any water with over 5,000 parts per billion of lead as hazardous waste.

Butte School District’s Director of Maintenance Jeremey Whitlock said that testing all nine schools in the district took about six months. Of those nine schools, the results from six are on the EQuIS database, set up and updated by the Montana DEQ. The district is still waiting to hear back on the results from Butte High School, Kennedy Elementary and East Middle School.

Out of all the faucets with results available in Butte School District, only 14 tested for elevated levels of lead, according to the EQuIS database. “I was actually pretty happy,” Whitlock said of the results. He said the next steps are to flush the faucets that tested into bin two and re-test after 24 hours. If the lead levels are still showing up as being over 5 parts per billion, the faucet will need to be replaced.

Whitlock said in an email that he will do the second round of sampling after he gets the results in from the rest of the schools, and has plans to replace fountains or faucets during spring break or possibly in the summer.

Two fixtures in the district showed up as being in bin one, the classroom sink in room four in the Butte High Career Center and the drinking fountain in 100 hallway north in West Elementary, which tested at 99 and 60 ppb, respectively.

Schools in the district enacted strict protocols keeping students and staff from using drinking fountains after the onset of the COVID-19 pandemic.

While these levels are high, they seem to be lower than fixtures in other Montana schools. West Billings High School had more than 40 fixtures out of 139 test into bin one, according to the EQuIS database, with one faucet testing at 5,800 ppb, the highest in the state so far. Over 100 schools in the state have had faucets that tested into bin one. 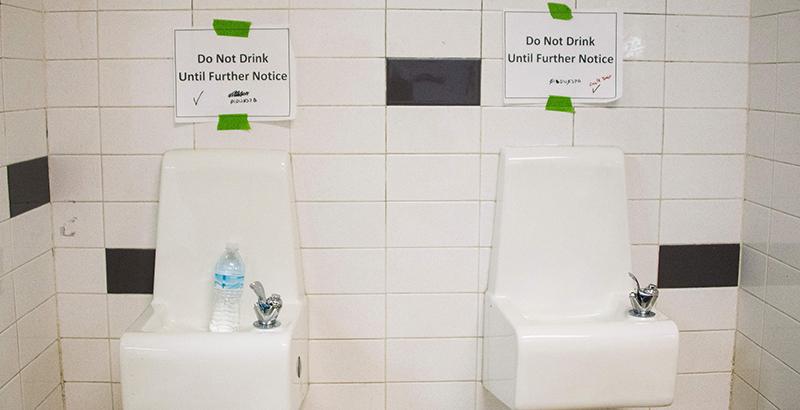 The deadline for testing was Dec. 31, but some schools, such as Anaconda Junior/Senior High School, sampled after that date.

“We tested all our schools,” said John Sullivan, superintendent of Anaconda School District 10.

The EQuIS online database doesn’t currently show any samples from Fred Moodry Intermediate School or Lincoln Elementary in Anaconda, and three out of 12 of the fixtures tested at Anaconda Jr./Sr. High School and the Memorial Gym in Anaconda fell into bin two.

Montgomery said this delay in uploading results to the database can happen for myriad reasons, including incorrect result formats from the lab a school chooses.

COVID has played a part in delaying schools’ abilities to test. Because the Dec. 31 deadline was set before the onset of the pandemic, the DPHHS is being flexible with the deadline, said Jon Ebelt, public information officer at the Montana DPHHS.

The Deer Lodge School District is in the process of testing and has communicated that to the state, said Deer Lodge School Superintendent Rodney Simpson in an email. They didn’t meet the Dec. 31 deadline because of a change of the maintenance director, he said.

Mike Meagher, the new transportation and maintenance director for Deer Lodge School District, said the testing for all schools should be completed within the next couple of months.

The process of testing the samples includes making an inventory of every faucet that falls under the rule and sending it to the DEQ, then collecting samples from them all once the inventory is approved.

“Sounds easy but it is more involved than that, such as mapping, flush plans, etc.,” Meagher said in an email. Whitlock agreed that taking the inventory was an intense process, and definitely the part of the sampling that was the most time consuming.

The money for the testing comes from an EPA grant, and tests are $20 each.

While the testing costs are covered under the Water Infrastructure Improvements for the Nation Act, there hasn’t been a grant to cover remediation costs until recently. In partnership with the Montana Office of Public Instruction, there is up to $1,000 available for reimbursements for the cost of remediation on a first come, first serve basis to schools, which is almost depleted now, Montgomery said.

He also said the Federal Infrastructure Investment and Jobs Act, also known as the Bipartisan Infrastructure Legislation passed in November, recently had the language amended to allocate for remediation funding.

“I would encourage schools that haven’t sampled yet to please do so,” Montgomery said.

The CDC’s blood reference level to determine children who have high blood levels is 3.5 micrograms per deciliter (35 ppb), and although the DEQ’s database classifies any water lead concentrations under 5 ppb as requiring no action, the American Academy of Pediatrics recommends the water lead levels in school drinking fountain water be no more than 1 ppb, according to a 2016 policy statement.

There is no known safe level of lead in a child's blood, according to the EPA’s website.

Butte Central Schools was one of several Butte schools that had soil testing done by the Atlantic Richfield Company as part of Butte-Silver Bow’s Residential Metals Abatement Program. All the lead levels in Butte Central’s soil were under the program’s acceptable threshold, according to Don Peoples Jr., president of Butte Central Schools.

Butte Central Schools are in the process of reaching out to engineering firms to conduct water testing, Peoples said.

* I understand and agree that registration on or use of this site constitutes agreement to its user agreement and privacy policy.
Prev Next