“Our hands are tied on this one because it does fall within the guidelines and we can’t vote with our heart,” Planning Board member James Albano said. “But at some point, we’ve got to start looking at some better products.” The problem in this case was the project’s narrower lots that intensify the cookie-cutter feel of these subdivisions, and are an increasingly visible trend in new developments.

The statement echoed recurring and increasingly angry protest before the Palm Coast City Council about what Hoover himself, summing up the substance of many of those comments at Tuesday’s council meeting–that growth is “maybe out of control with some of the impacts like traffic.” Hoover said in this particular case, the subdivision was rezoned two years ago in such a way that makes any grips about loot sizes irrelevant: it’s not the city’s place to dispute them.

“So when we you see future rezonings come in and you have concerns that’s really the opportunity” to push back against the sort of zoning that would allow such high-intensity development,” Hoover said. Once it’s zoned for higher intensities, there’s nothing boards can do subsequently.

The project is within the Palm Coast Park Development of Regional Impact, or DRI, the master-planned community the Palm Coast City Council approved in 2004, enabling the development of up to 5,000 homes on acreage the city had at the time recently west of U.S. 1–the city’s new frontier.Like Saw Mill Creek,a subdivision already growing fast in the same area, with plans for 2,272 houses at build-out, Somerset at Palm Coast Park is to be only one more of many like it in the DRI, which spreads over 4,700 acres, or some 7.5 square miles. The DRI was initially cleared for 3,600 houses. Developers have won concessions from the council over the years, the last time in 2018, raising the cap to 4,960 homes. That’s the sort of rezoning Hoover was referring to, in essence indicting that council’s decision. Planners in Palm Coast don’t usually speak so freely. Hoover could afford it: He’s retiring.

The DRI includes 3.2 million square feet of commercial, public, and industrial uses, including a 30-acre site donated for a school. The DRI expires ion 2034, the year it is expected to be at build-out.

Somerset at Palm Coast Park will spread over 162 acres, and will be built in three phases. (It is parallel to Belle Terre Elementary and Indian Trails Middle School, to the west, as the crow flies over a vast swath of conservation land. The land west of the site is zoned industrial.) 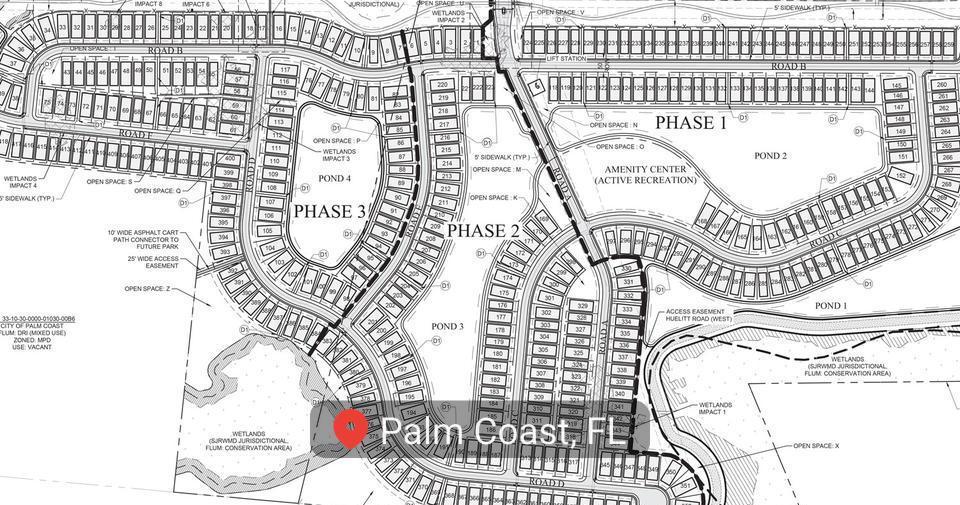 Lot sizes will be a minimum of 4,000 square feet and 40 feet wide, with all homes having a mixture of 40 to 50 feet wide lots–interspersed together rathere than clustered. That size lots has been drawing criticism in recent years, as they have in the proposed next phases of the Eagle Lakes development at the south end of Old Kings Road. Lots there are planned at 40, 50 and 60 feet. The project has drawn sharp opposition from residents in neighboring subdivisions, including the first phase of Eagle Lakes, who contend that the new additions will be very different from theirs, affecting the character of the neighborhood and intensifying traffic on two-lane Old Kings Road. The county’s planning board last week rejected recommending the development, which nevertheless will go before the County Commission in April.The difference with Somerset, which has drawn zero opposition from neighbors because there are none, is that there is no existing character to differ from, and U.S. 1 is a four-lane highway. There will be two full access points to the highway, one in the center of the development, the other at the north end–through city property, which entails securing an easement from the city. The project will also have a couple of pedestrian access points to the popular linear park on U.S. 1.

Rudd Jones of the Matthews Design Group was prepared to answer questions from Planning Board members, but the questions they asked–why would the 40 and 50-foot lots be intermingled rather than clustered, what would the houses look like, what would the square footage of the houses be–he couldn’t answer, and what answers he did provide were as if inspired by Samuel Beckett minimalism, with a drawl. (At Eagle Lakes, the square footage of homes on 40-foot wide lots are to be between 1,700 and 1,900 square feet.)

Jones’s presentation did not sit well with Suzanne Nicholson, one of the board members. “I’m disappointed in the presentation,” she said, even as she voted to approve the project. “I don’t really feel like we had enough information to try and make this decision. It has a feeling that it’s just not necessarily a good product for our community. But it falls within the guidelines of what we as Planning Commission folks have to approve.”

“I concur with the thought that there could have been a little better presentation,” Board Chairman Clint Smith said.

As a master planned development, the project was required to have “something unique about it,” as one of the planning board members put it. Hoover, the senior planner, said it does–that’s what the multi-use path, substantial improvements on Matanzas Woods Parkway, the future school site and recreation are all part of the advantages of the MPD.Unquestionably, however, the new development will feature quite close-cropped houses on close-cropped lots with setbacks of just five feet on the side yards, 20 feet up front, and 10 in the rear. And that (as with Eagle Lakes), raised concerns on the board.

“My concern is that we’re approving a lot of these MPDs over the last year, and it seems like the lots are getting narrower and narrower,”James Albano said. “And I think what’s happening is that even though the lots are narrow, it is in an MPD and they’re going to have amenities, so of course these houses are going to cost more. So being here for a long period of time I’m starting to notice a lot more smaller houses being placed on our 80-foot lots inside Palm Coast because these MPDs are driving out the lower cost homes. So we’re starting to see a lot of small, nondescript houses in Palm Coast, because there is a lack of other opportunities to put smaller homes. Plus, architecturally, can’t do much with a 30-foot wide house.”

Still, the board voted to approve, 5-1, with only Sybil Dodson Lucas in dissent.