It all comes down to practicality. Both smart faucets and smart showers have their perks—they can help you save time, they’re fun to use, and they can accommodate people with physical disabilities. But when you look at the features offered by smart showers, their difficult requirements, and their cost, it’s clear that they’re a terrible option for most people.

People often underestimate smart kitchen faucets, which is understandable. I’m not about to pretend that the words “smart kitchen faucet” are cool or exciting. But smart faucets are a bit more complex than you’d expect—they’re more than just voice-activated or motion-controlled spouts.

Well, the cheapest options are that simple. You can turn them on using voice commands or gestures. But more expensive smart faucets offer additional features, such as the ability to pour exact measurements of water at your desired temperature using voice commands. You can even create presets for common tasks, like filling pitchers, coffee pots, bottles, or the sink.

Some smart kitchen faucets, like the Kohler Sensate, actually double as water usage sensors. They can track your water consumption or warn you about leaks or water flow problems.

Smart showers are a lot less robust. The simplest smart showers are just digital control panels, which you can use to turn on the shower and set its temperature. More complex options add voice controls, water usage sensors, and in some cases, Bluetooth audio.

Now, I’m not trying to say that smart showers are useless. Dialing an exact temperature in your shower is a serious luxury, and if you have limited mobility, a voice-controlled shower or bath could make life a bit simpler. And, of course, learning how much water you use in the shower can be an eye-opener.

But the benefits of a smart shower are pretty limited. And that’s a big problem, because smart showers are extremely difficult (if not impossible) to install in most homes. 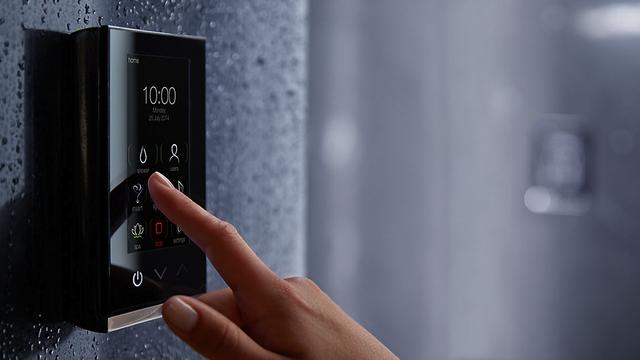 Installing a smart kitchen faucet is just like installing any old “dumb” faucet. It’s a simple process—you remove the old faucet, tighten the smart faucet in its place, and connect it to the water supply. (The new faucet’s gaskets should eliminate the need for caulking.)

Many smart kitchen faucets run on a battery pack, which sits in your under-sink cabinet. The faucet will keep working when the batteries die, but it’ll lose its smart features until you recharge the battery (if its rechargeable) or swap in some new D cells. If your smart kitchen faucet needs wired power, it’s not a big deal, as most under-sink cabinets have outlets for dishwashers, garbage disposals, and other appliances.

Smart showers and shower touch panels are a different ball game. Even if you’re a part-time DIY warrior, you’ll need an electrician to get the job done—wiring something through the walls of your shower isn’t an easy task. And if your home doesn’t have a dedicated water line going straight from the heater to your shower, the whole smart shower thing probably isn’t worth the effort.

Temperature control is the big selling point for smart and digital showers. But you can’t get exact, consistent temperatures if your shower shares a hot water line with sinks, toilets, washing machines, or dishwashers.

Maybe you live in a newer home with nice plumbing, or hey, maybe you’re building a home right now. In these situations, a smart shower is a realistic option. But only if you’re willing to pay the price. And yeah, smart showers are expensive.

Do You Really Want to Pay for a Smart Shower?

A smart kitchen faucet costs a few hundred bucks and takes an hour or less to install. They’re a simple and easy upgrade for your kitchen, and while they aren’t exactly affordable, they’re not prohibitively expensive either.

The most stripped-down smart showers, which are just digital control panels, cost between $500 and $2,000. But you also need to buy a digital valve, and unless you’re a contractor, you’ll probably hire an electrician and plumber to install all this stuff.

Those who live in older homes will also need to route a new line from their water heater to their shower. And if you have an old water heater, you may need to replace that too.

Some people are happy to spend this money on a smart shower, which is fine. And if you’re building a home, then you’re already paying for a lot of this stuff—adding a smart shower to the mix may be a minor expense.

But smart showers aren’t a practical option for the average person, not by a long shot. They just don’t do enough to justify all this money and effort. In that way, they’re the opposite of smart kitchen faucets, which are reasonably priced and offer very clear benefits.