From now until the 2022 NFL Draft takes place, we hope to scout and create profiles for as many prospects as possible, examining their strengths, weaknesses, and what they can bring to an NFL franchise. These players could be potential top 10 picks, all the way down to Day 3 selections and priority undrafted free agents. Today I’ll be profiling another Oklahoma offensive lineman with lots of starting experience, has played multiple positions and is scheme versatile. 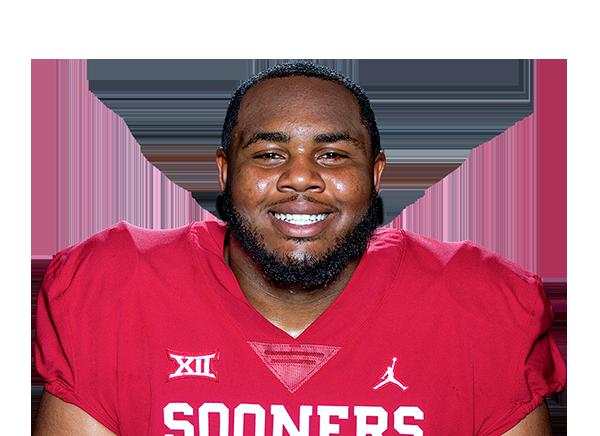 After two seasons starting at right guard, Robinson spent 2021 at right tackle due to necessity and his versatility. He has shown some scheme flexibility along with positional flexibility that could benefit him at the next level. Common for Oklahoma linemen is their tenacity and desire to finish blocks and Robinson is no different.

As a run blocker, he has good snap quickness and mental processing to identify his assignment. On Zone runs, he displays good positioning and play strength on front side runs to displace his defender and has good lateral quickness and improved technique to cross the face of the defensive lineman and flip his hips to reach blocks on the back side of blocks. He has solid timing on combo blocks to climb to the second level and comes to balance well to engage and control linebackers.

Vs Oklahoma State, at right guard Robinson (52) gets good push as the post on this combo block and continues to drive and finish the block.

Vs West Virginia, at right tackle he shows good quickness to get inside the defender and flip his hips to wall him off on the Reach block.

On Gap/Power blocks he has the aggressiveness and strength to move defenders on base/down blocks, gets a good push on double teams and has good mobility to pull from the guard or tackle position. He does a good job to identify his block when turning the corner and can swallow up smaller defenders. Like most Oklahoma blockers, he looks to finish blocks well with leg drive, play strength and tenacity.

Vs Texas, at right guard he’ll show his mobility pulling to his left, kicking out the linebacker and putting him on the ground.

Vs Oregon at right tackle, his pad level is bit high but he gets a good push to drive the defender inside.

As a pass blocker, he as good snap quickness and gets into his set quickly. He has good mobility to mirror pass rushers. When he has good hand placement inside the defenders chest plate he uses very good hand strength to lock on and becomes difficult from which to disengage. This allows him to sustain well and his anchor is strong. Mobility and footspeed are evident on screens and he is light on his feet in pass protection. He displays good mental processing on stunts and recognizing late blitzers.

Vs Texas at right guard, he shows light feet to mirror and good hand strength to control the pass rusher.

Vs West Virginia at right tackle, good slide and hands to push the speed rush up the arc.

At Baylor playing right tackle, he displays good awareness on this twist to pick up the looper to the outside.

His pad level improved in 2021 but in the previous season he often played with a high pad level. Hand placement is inconsistent and when he gets wide with them he opens up his chest and will grab. On scoop blocks, his angles are not consistent to get outside the second level defender. When playing tackle, he got too wide in his pass set opening up the inside lane. On quick passes he stops his feet and his stance gets narrow. His punch timing can use improvement to avoid reaching and become more impactful. His length is not ideal to play tackle.

Vs Texas at right guard, his pad level is high and defender wins the leverage battle to push him into the pocket.

Vs Baylor, at right tackle he doesn’t maintain half-man responsibility and gets too wide with his body and his hands are also too wide allowing the rush inside and causing him to grab.

Overall, Robinson has good quickness and mobility to play in a Zone scheme and the physicality, strength and desire to finish blocks and fit in a Gap/Power scheme. He can pull in either direction and get out in front of screens and has good hand strength to control blockers. In pass protection, he mirrors well, sustains blocks and has a strong anchor. Areas to improve include consistency in his pad level, punch timing and hand placement to not overreach and maintaining a half-man relationship in pass protection.

Robinson caught my attention at the East West Shrine Bowl and showed good improvement in his consistency this past season. While he can play right tackle if needed he is best suited to play inside at guard.

Oklahoma does produce NFL level offensive linemen. Since 2018, you have Ben Powers, Cody Ford, Orlando Brown, Adrian Ealy, Bobby Evans, Dru Samia and Creed Humphrey. Nastiness is a common quality among former Sooners and scheme versatility makes him valuable. His mobility is a plus and with more consistency could become a key player. I like him more than others have him ranked right now and he’ll have a chance to compete for a starting role right away.