"our exalted stable oh, looks so good on the kitchen table..."

When you eat a simple beautiful banana, you might in the very back of your throat taste blood. I know that sounds weird and you probably don't actually taste blood but if you dare look into the history of Chiquita Bananas, or more to the point, the United Fruit Company that sort of birthed Chiquita it will change you. You will find an unsavory past, some say a litany of crimes against humanity, overthrowing governments (U.S.-backed coup in the 50's), dealings with Columbian drug traffickers, environmental destruction, horrible workers rights violations and much, much worse and, and you might indeed taste blood, human blood not from your taste buds but from deep down in your soul. If you care to dig deep, it is enough for you to never eat a banana again (I am not joking) as some sort of veiled protest of a bloody past or just because the mere sight of the fruit makes you want to wretch.Now that I have totally bummed you out, let's talk about the important politico art punkery of "Banana" by Pōneke/ Wellington (New Zealand) jangle / surf / fuzz-pop sextet Tidal Rave. The song is hypnotic in it's musical sway and has a broad artful kind of carnival-esque outstretched hand, stage spotlighted vocal aesthetic. It also has underneath, a dire, somber black tone that I feel within the stoic, serious nature of the musical attacks despite a kind of baroque pop flair. I thought of an amalgam of Dresden Dolls and Sparks and oddly (or maybe not) Concrete Blonde. Listen to Johnette Napolitano's sad powerful lilt on "Tomorrow Wendy" from the Concrete Blonde's 1990 "Bloodletting" album and there is some tenuous artful connection to Tidal Rave's sound ( ok, maybe only in an alternate universe but I feel it).More than the sound and subtle sonic fury of "Banana" is the dark political social commentary that grabbed me intensely. Check it out and check Tidal Rave out. I have included a documentary of sorts about the dark history of the lovely banana. It is NOT for the faint of heart.Peace.-Robb Donker Curtius 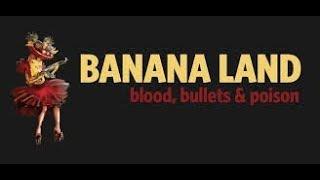