BTS member V on Monday gave ARMY, the group's fandom, a treat as he shared his ten mirror selfies. Taking to Instagram, V shared a post as he stood in front of the mirror giving different poses and showing off his outfits. The pictures were taken over several months. In the first post, he wore a brown coat, paired it with cream coloured pants and also sported spectacles. In the next picture, he dressed in a black sweater, white pants and a matching jacket. (Also Read | BTS' V shares pics as he browses 1970s music albums and poses with saxophones, fans say: 'Boyfriend vibes are so high')

For the third selfie, he sported a white T-shirt with beige pants and permed hair. The picture was taken last year, seemingly during the release of BTS' track Butter when V had showed off his new hairdo.

In the next picture, he opted for a red T-shirt and white pants. The picture was taken in May last year when BTS had a V Live session. In the next mirror selfies, V sported a grey pant-suit, a red pair of pants and black jacket and also a black outfit. Several of his pictures also had him wearing different brown coats and jackets. Sharing the pictures, V captioned the post, "I was rearranging my album (gallery/camera roll) and (person in suit levitating emoji)." 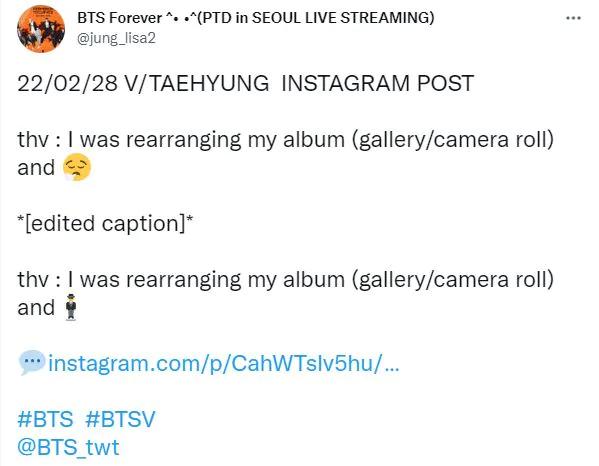 Earlier in February, when V had shared a post on Instagram, Jin had commented, "Oh it’s a boyfriend pic.” V had replied, “My dream is to be a boyfriend pic material.” He had later deleted the post.

Reacting to V's latest Instagram post, a fan tweeted, "Taehyung is a kind of boyfriend that says 'Babe, this is my outfit for our date, does it look okay?' #V." "So many boyfriend material pics of Taehyung !!!" said another fan. "We are blessed with more Taehyung mirror selca (selfie)," wrote another Twitter user.

"I can't believe a mirror has more interaction with Tae than us," said a person. "Still can't believe we got so many mirror pics at once, user thv is blessing us," wrote another. "My heart skipped a million beats. Oh My God," tweeted another fan. A fan also said, "He's so fine, this genre is Tae is my favourite so far." "Taehyung did a 365 days a year mirror selcas challenge and posted them all for us," wrote a person.