Two years after the cast originally planned to take the stage, Centerstage Theatre’s “Dirty Rotten Scoundrels” is opening next month.

The show runs April 1-24. Tickets are on sale at centerstagetheatre.com.

“Dirty Rotten Scoundrels” by Jeffrey Lane and David Yazbek tells the tale of two con men who make a deal: the first person to get $50,000 from a beautiful heiress wins and the other is forced to leave the country.

Centerstage Theatre originally planned to perform the show in the spring of 2020. The onset of the pandemic forced the theatre to postpone three shows, and the recent Omicron surge forced another delay of the upcoming production by a week.

“We are excited,” Duval said. “It’s been exactly two years since we were last in rehearsals and it’s so great that we got to keep this show in rotation. The cast has a lot of fun together and has really gelled beautifully.”

The musical comedy is recommended for ages 16 or older.

Audience members will also recognize a familiar face among the cast as Duval returns to the stage after a seven-year hiatus due to health reasons. Duval is playing Christine Colgate.

“It’s intimating getting back on stage … but some of it is like riding a bicycle,” she said. “There are parts you fall right back into with your training, and you remember it’s the only thing you’ve ever wanted.” 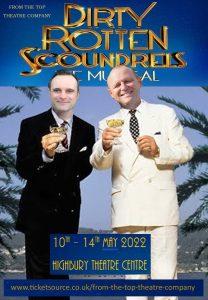 Duval holds a BFA in Music Theatre from Elon University in North Carolina, and has performed in all regions of the country.

To scratch the theatre itch and use her degree, Duval took to directing and production work, landing a job with Centerstage in 2017.

Some new and returning stars in the show highlight local flair found here in Washington state.

The Federal Way professional theatre group also opted to move one of its upcoming shows, “The Oregon Trail,” to dates in late summer to close out the 2021-22 season.

“We have had carefully considered protocols in place since the start of the pandemic, and we are pleased to be able to say that there have been no theatre-related outbreaks among our staff or artists at any point,” Centerstage wrote on their website.

To share your opinion for publication, submit a letter through our website https://www.federalwaymirror.com/submit-letter/. Include your name, address and daytime phone number. (We’ll only publish your name and hometown.) Please keep letters to 300 words or less.