Following the debut of latest BMW M3 and M4 in September last year, the German carmaker has now revealed a convertible version of the latter. Officially called the M4 Competition Convertible with M xDrive, production of the model will begin in July this year at BMW Plant Dingolfing, with sales set to begin shortly after.

In terms of performance, the new M4 Convertible takes 3.7 seconds to get from 0-100 km/h, making it two tenths quicker than the previous M4 CS and but 0.2 seconds slower than the G82 with M xDrive. In terms of top speed, the G83 is capable of hitting 280 km/h with the optional M Driver’s Package, or 250 km/h without it.

Key to these figures is the S58B30T0 3.0 litre twin-turbo straight-six petrol engine that is shared with the coupe and the M3 sedan. The Competition-spec mill outputs the same 510 PS (503 hp) and 650 Nm, with drive sent to all four wheels via an eight-speed M Steptronic automatic transmission (with Drivelogic) and M xDrive all-wheel drive system.

The latter uses an electronically controlled multi-plate clutch in the transfer case to distribute power between the axles, but remains rear-biased most of the time. An Active M Differential provides torque vectoring at the rear to offset loss of grip, and just like its hard top siblings, drivers can engage 2WD mode that requires the DSC system to be switched off altogether.

An M Mode button makes it easy to swap between the various drive modes, and drivers can programme their preferences to the two M buttons on the steering wheel. The configurability extends to not just the powertrain, but also the M Servotronic steering, adaptive suspension, DSC (including M Dynamic Mode) and brake pedal feel. For even more functionality, the optional M Drive Professional package adds on things like a Track mode, M Drift Analyser, M Laptimer and M Traction Control functions.

Unlike its predecessor, the new car adopts a panel bow soft top instead of a hard top, with the fabric roof being some 40% lighter. Available in Black or Anthracite Silver, the roof is said to provide superior levels of acoustic and thermal comfort compared to conventional soft top designs, while taking up less space too. 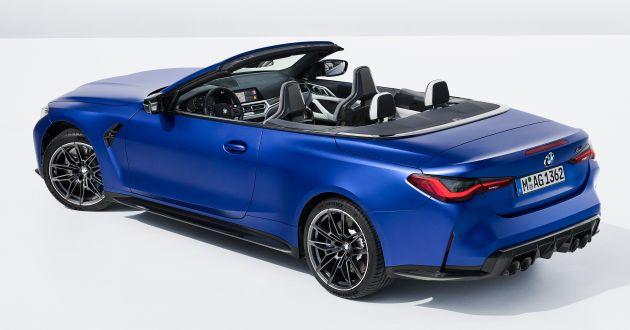 BMW quotes 300 litres of luggage space with the roof down, which is an increase of 80 litres compared to the previous F83 model, and with the roof up, that space is increased to 385 litres. It takes around 18 seconds to open and close the soft top, and drivers can do so while travelling at speeds of up to 50 km/h.

Apart from the folding soft top, lack of B-pillars and a redesigned rear deck, the rest of the M4 Convertible is pretty much the same as the coupe version. This includes the large, vertical kidney grille in black that is flanked by two-section apertures on the lower apron, as well as the headlamps, side gills, rocker panels, rear taillights, rear diffuser element and exhausts in Black Chrome that measure 100 mm in diameter per tip.

BMW offers the M4 Convertible in eight colours, including Sao Paulo Yellow, Toronto Red and Isle of Man Green, with further options available through the BMW Individual programme. On that mention, customers can also specify side mirror caps in body colour and a chrome finish for the tailpipes, while the M Carbon exterior package adds on inlays for the front air intakes, side mirror caps and a rear diffuser made from carbon-fibre.

Like the current G82, there’s still four seats as standard inside, while the rest of the cabin is pretty much the same as the coupe. Standard items here include the M-specific Live Cockpit Professional system and heated M Sport seats with illuminated “M4” logos, Merino upholstery.

Some of these options, like the carbon-fibre seats and trim are part of the M Race Track Package, which also adds on M Carbon ceramic brakes and weight-minimised M light-alloy wheels (semi-slick tyres available) to trim 25 kg from the overall weight.