Good Morning Britain’s Richard Madeley has left fans fuming after he repeatedly interrupted a report about Ukraine refugees with a “ridiculous” line of questioning.

The ITV programme spoke to David Fox-Pitt, who is stationed at the border between Poland and Ukraine and described the efforts to feed the refugees fleeing their wartorn native country.

Yet during the interview on Tuesday’s instalment of the morning news programme, ITV’s Richard, 65, repeatedly tried to interrupt the guest to ask which of the pizza toppings being laid on for the refugees fleeing the invasion of Ukraine was most popular.

David, who is in the Polish village of Medyka, was interrupted via video link from London as he said: "I also wanted to mention the amazing..."

Want all the latest news and analysis from Ukraine? Sign up to our World News Bulletinhere

David replied: “We do two. The favourite one is the pepperoni with a lovely cheese.”

But GMB viewers were stunned by the line of questioning, with many taking to Twitter to slam the inane interruption.

One wrote: “With all the questions Richard Madeley could have asked about Ukrainians who finally get to safety, he asked what was most popular pizza topping! Idiot!!” 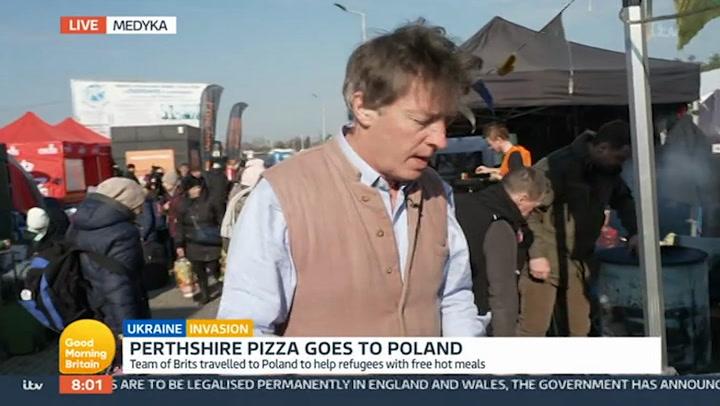 Another added: “Richard Madeley asking at safety camp, what bereft, frightened, war-torn homeless refugees FAVOURITE PIZZA is? This is a truly ridiculous man.”

Someone else commented: “Lord give me strength,” adding, “Richard Madeley asking the tough questions on GMB.”

Brit David runs an event company in the UK and has travelled over to Poland to help refugees by sourcing and fundraising for food at the border.

Elsewhere in the programme, Richard went down a tougher line of questioning for guest Matt Hancock, who he quizzed on the MP’s decision to take in a Ukrainian refugee.

Richard insisted on addressing the “elephant in the room” and asked whether the West Suffolk MP had announced the move in order to “rebuild his reputation” after the explosive revelations of his affair last year.

Richard said: “We all know there will be cynics watching this and people who will go online, on Twitter, on social media and say that the reason you’re doing this is to help rebuild your reputation after you had a bad political fall and you’re sort on in the wilderness and that’s why you’re doing this to basically improve your standing."

But Hancock insisted the facts of the matter were “completely the other way around”.

Hancock noted that he was appearing on BBC Radio Suffolk yesterday morning to discuss the scheme when the host point blank asked him if he was going to sign up and he confirmed he would.

Good Morning Britain airs weekdays at 6am on ITV.