INDIANAPOLIS—Kellan Grady is trying to avoid another sub-par performance on Thursday against Saint Peter's in the first round of the NCAA Tournament.

There are a few words that one could use to describe Grady's lackluster two-point, 1-8 shooting night against Tennessee in the semifinals of the SEC Tournament, but he sums it up pretty well himself.

"I acknowledged the game on Saturday. I played like crap, and I own that."

The season that Grady has put together for Kentucky has been anything but crap. Averaging 11.5 points per game on 45 percent shooting, he has brought a veteran edge to Kentucky, and will continue to do so as one of the only Wildcats who has prior experience in March Madness.

He also happens to be a relatively good shooter, draining 42.6 percent of his 3-point attempts this season.

That just hasn't been the case in some of Kentucky's final games entering the tournament.

In UK's last six games, Grady has hit multiple treys just once. To put the shooting slump into perspective, the Davidson transfer had landed two or more 3-pointers in nine consecutive games leading up to the cold streak.

It's not that Grady can only score from behind the arch, because he can fill it up when he gets to the rim. Against LSU on Feb. 23, he shot 0-5 from deep, but finished with 13 points, nailing five deuces and three free throws.

In the regular season finale at Florida, he made just one 3-pointer, but finished the night shooting 5-8, scoring 11.

When looking at Grady's stats in the middle of SEC play, you can see just how quick the Boston native can takeover for Kentucky.

From Feb. 8-23, he buried 26 deep balls and scored 69 points. Clearly his scoring prowess is there, sometimes slumps just happen. It may not be at the right time for Kentucky, but if there is one player in the nation who can snap out of a skid with one made bucket, John Calipari is looking at him.

"At the end of the day, I think I've certainly proven myself this year. And I don't think one game, regardless of the night or that game, is definitive of the player I am or of the season I've had," Grady said.

Being the veteran he is, Grady isn't harping on his bad games. He doesn't boast about his good games, either. After the moment passes, it's time to get focused on the next game and the next task at hand. 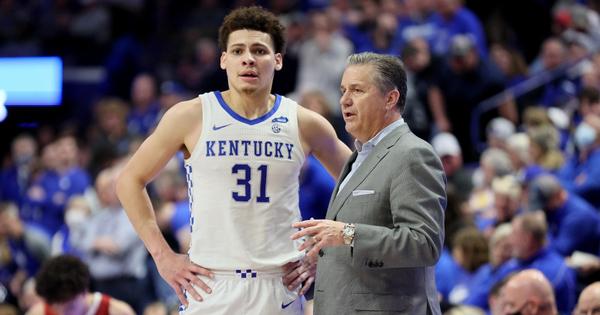 "I think the best thing for me and what I've tried to do is put it in the rear view mirror, obviously learn from it and improve on some of the things that I could have improved on, and be more shot ready and move on to the next play," he said.

While he's cheered and jeered for what he does with the basketball in his hands, Sahvir Wheeler is quick to remind everyone that Grady is just as important on the other side of the court.

"He has that nickname Steady Eddie, and that's because of how reliable is he on the defensive side," Wheeler said. "So maybe he's not making shots, and that can go for anybody, but the way Kellan is defensively, the way he talks, he communicates, he's not getting scored on, he's down there fighting, all of that stuff is part of the accountability that he has that leads us to winning."

Kentucky knows that it needs Grady in order to hang a banner this year. Leaning on his past experience in the NCAA Tournament will only pay dividends for the players who are experiencing March Madness for the first time.

Funnily enough, that NCAA experience comes against Kentucky, as the Wildcats topped Davidson 78-73 in the first round of the 2018 tournament.

"My whole team was on an emotional high because we had just won the Atlantic 10 Tournament and we felt really good, and we truly thought we were going to beat Kentucky. Obviously that didn't happen," he said.

Davidson checks in as one of the better mid-major Division I basketball programs in the country, but Grady still got to feel what it's like going up against big brother, so he can relate to the position that Saint Peter's finds itself in.

"We understand that everybody in this tournament is either here because they got that at-large bid or they're champions in their own right. So Saint Peter's University is a very good team. We can't take the seeding for granted or think this is going to be an easy task at all," he said.

Specifically, shooting 3-pointers is going to be far from an easy task for Grady. The Peacocks have the 13th best 3-point defense in the nation, holding opponents to just 29.3 percent from downtown.

While it may be a No. 15 seed, Saint Peter's isn't going to roll over and die for the Wildcats, and it sure isn't planning on giving Grady open looks to work out of his shooting skid.

Now having the chance to participate in March from the other side of the spectrum, Grady can appreciate what the Peacocks are going to bring on Thursday night. That being said, he and his teammates won't exactly be taking it easy on them inside Gainbridge Fieldhouse.

"We have an incredible opportunity here as a group to do something really special in the NCAA Tournament, and that's what I'm focused on. As long as I play to win, I think the rest will take care of itself."