Democrat Kristine Reeves announced on March 16 she is running for State Representative in the 30th Legislative District. She is vying for the seat left open by Rep. Jesse Johnson, who announced he is retiring this year.

Reeves is a working mom with two young kids, is a Moses Lake native who grew up in and out of the foster care system, facing homelessness at points during her childhood, according to her campaign announcement.

“As so many families struggle during this pandemic, I believe we need a State Representative that can get results on the basics. This means bringing family-wage jobs into the district, reducing crime, increasing child care access, increasing access to quality health care and ensuring state fiscal accountability. I’m excited to bring my public policy, legislative and lived experience to get results for the residents of Federal Way, Auburn and Pacific,” Reeves said.

In 2016, Reeves defeated a Republican incumbent for Washington’s 30th Legislative District, becoming the first African-American woman elected to the Washington House in 18 years and the only woman in the legislature with children under the age of 5, according to her campaign announcement. She was then re-elected in 2018, defeating opponent Mark Greene.

She resigned in 2020 to run for Washington’s 10th Congressional District. 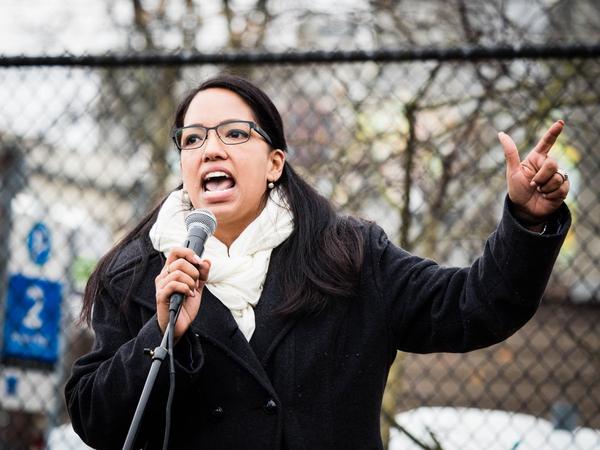 Her life is a testimony to “the value of public education and the critical investment of public-school educators in transforming her life and helping her break the cycle of poverty,” her announcement stated.

As the first person in her family to graduate from college, Reeves earned her bachelor’s degree from Washington State University and a master’s degree from Gonzaga University. She has served as an immigration advisor at several higher education institutions and as the statewide veterans representative for U.S. Senator Patty Murray.

Kristine’s hard work in the Washington House resulted in a national model for progressive action including “ensuring educators can afford to live and work in the communities in which they teach our kids, launching a program to link students with apprenticeships and on the job training, passing the country’s most progressive paid family leave policy, and more,” according to her announcement.

She lives with her husband and two young children in Federal Way.

To share your opinion for publication, submit a letter through our website https://www.federalwaymirror.com/submit-letter/. Include your name, address and daytime phone number. (We’ll only publish your name and hometown.) Please keep letters to 300 words or less.