Nestled semi-ironically amongst the red velvet and golden embellishments of the Hackney Empire, Giacomo Puccini’s classic opera arrives in a flurry of sweet words and cold snow. While musically divine, some visual choices detract from this outpouring of love and loss.

The story follows a bohemian set living in squalor in Paris but dreaming of great art and love, and is dominated by two parallel romances – one naive and all-consuming and the other more practical and realistic. Guess which one ends happily? Yes, you’re right, neither!

Middle-class boys playing bohemian with the lives of working-class girls trying to survive. It’s never going to end well, is it?

It’s certainly the music and not so much the plot that keeps people returning devotedly to this masterpiece.

Luciano as Rodolfo the “tortured” poet provides vocal clarity and a nice energetic performance. His aria “Che gelida manina” (“What a frozen little hand”) is a highpoint of skill.

Francesca Chiejina as Mimi charms us with the most well-known moments of the opera. Her range of volume and tone keeps us breathless with anticipation. Such fragile grace.

Michel de Souza as Marcello, the ironic painter, is a gifted singer and bouncing presence on stage.

Jenny Strafford as Musetta, although having the fiery nature of the character down, is not the strongest voice among the leads. However, her flirtatious ways provide some of the few bits of comic relief in a piece dominated by want, emotional betrayal, and death.

The difficulty is how to put a fresh lick of paint on the old battered caravan. We have all seen the pokey attic rooms of the men’s garret or the bustling bar of Cafe Momus many, many times. Florence de Maré and Neil Irish do their best with some interesting artistic flair, but focus too much on this and lose sight of the story in the process.

The attic rooms in Acts 1 and 4 are recreated with a large mirror wall and a confusing, steampunk-style sewer pipe with what looks like a hairdryer underneath, “burning” Rodolfo’s script for warmth.

In Mimi and Rodolfo’s first meeting, they step into the basket of a hot air balloon and a cloud backdrop promises to be a sweet idea, but sadly it remains firmly on the ground. So far a little confusing, but we’ll bite. 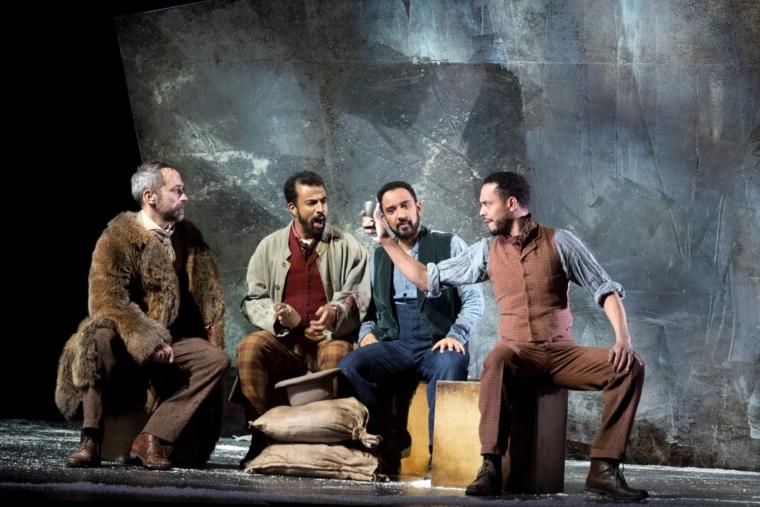 Act 2 is the only scene where we see the bustling Latin quarter and the bohemian world of Paris in the 1830s. The mirror wall is moved upright, and one long but lonely bench is pulled from the wings. The characters stand along it and sing out, swinging from bottles and joined by the exuberant ranks of the Hackney Children’s Choir. This is not the smokey, candle-lit world described in the opera. The grit, the glamour, all of it is sadly left to be imagined by those of us who have recently watched Moulin Rouge.

Unfortunately, James Conway’s direction keeps ending up with the performers bunched into odd configurations, squeezed between the blocky set pieces. I understand a touring production must be portable but the staging should mirror human interactions as best they can.

The final scene is what most people come for, and as Mimi’s poor coughing body is laid on the bed, the contentious glass screen splashes red with blood – a nice touch. Eyes moisten as she dies quietly, and the extreme catharsis and heartbreaking gravity is delivered to the audience as expected.

The ghoulish nature of the opera is here, despite the odd creative choices, and Puccini is once more vindicated as the master of the miserable.

The divine music swells around us, and my dreams of quitting my day job and running off to become a painter in Paris are well and truly squashed.

La bohème was performed for one night at the Hackney Empire on 4 March. For more information on upcoming shows at the venue, visit hackneyempire.co.uk.

The coronavirus outbreak meant that the Hackney Citizen was unable to print a monthly newspaper for three months.

We're grateful that we have since been able to resume printing. This would not have been possible without the generosity of our readers, whose donations kept the paper from disappearing completely at a distressing time for residents.

A huge thank you to everyone who gave their time and money to support us through the lockdown, and to those who continue to do so as we slowly recover from the dramatic fall in advertising revenues, on top of the existing challenges threatening the future of local journalism.

A one-off donation or a regular contribution from anyone who can afford it will help our small team keep the newspaper in print and the website running in the coming months and years.

Find out how you can donate.

Thank you for your support, and stay safe.