Many astonomical discoveries made by amateurs

Today our astronomical tool kit includes telescopes with 10-metre diameter mirrors (or bigger), radio telescope arrays spanning continents, and of course all located at the best available sites. Then, of course, there is also our growing collection of telescopes in space.

So, it might be surprising that even now there are opportunities for amateurs to contribute to astronomical science.

A century or more ago, many important astronomical discoveries were made by people working just for the fun of it. Only a lucky few were actually paid. The recipe seemed to be to make a discovery, and then name it after someone rich and famous, and then hope they give you money.

For example, when William Herschel discovered a new planet in 1781, he proposed naming it Georgium Sidus (George's Star), after King George III. It worked. He thereafter got an annual grant from the king. This name was not accepted internationally, and the planet was instead named Uranus. However, Herschel still got the money.

As astronomy got established as a science, the instrumentation and support required to build and operate it became beyond the reach of all but the richest amateurs. Probably the title for the maker of the biggest backyard telescope goes to the Earl of Rosse, who built, at his home in Ireland, a 16-metre long leviathan with a 1.8 m diameter mirror.

However, as the astronomical need for bigger telescopes and more advanced instrumentation grew, serious astronomical research moved more and more into the realm of universities, colleges, rich foundations and national research institutes. Today, many front-line astronomical facilities are beyond the reach of single nations and are built and operated as international collaborations.

Until quite recently there was an area of astronomy that was still the exclusive province of amateur astronomers with small backyard telescopes. The big telescopes used by professional astronomers had two huge drawbacks. The could only see a tiny bit of sky at a time, and with the tremendous competition to get observing time, the only projects that got telescope time were those focussed on particular objects. It was like studying a huge forest by looking at a single a tree at a time. 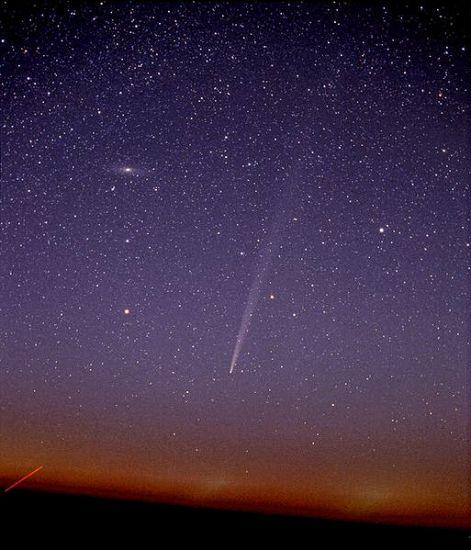 The smaller telescopes used by amateurs could see bigger patches of sky, and binoculars bigger patches still. In addition how much time spent observing was a matter only for the observer. Thus, finding new things, like comets, novae and supernovae, or monitoring variable stars became an important amateur contribution to science.

The situation was changed by the advent of survey instruments: new optical and radio telescopes that could observe huge areas of sky at a time, with all the data being stored and searched, often automatically, for interesting things.

New comets and asteroids are often seen by these instruments before they become bright enough to observe from the backyard. It might seem that amateur astronomy is at last just becoming an activity aimed only at personal enjoyment. However, that is not the case.

Instrumentation for backyard astronomers has improved enormously, so that even finding planets orbiting other stars is possible for amateurs. Intriguingly, amateurs are getting back to the astronomical research frontier because of the sheer power of the new astronomical instruments available to professional astronomers. These produce such a flood of data that the researchers cannot analyse it all.

Today, much of this data is stored in databases that are being made accessible to amateurs. Amateurs are now busy searching for comets, supernovae, new planets and other interesting things.

Unfortunately, these days, we are no longer allowed to name our discoveries after people with lots of money.

• Venus, Saturn and Mars lie low in the dawn glow. Venus is the brightest and Saturn the faintest.

• The Moon will reach its last quarter on March 24.