People Want to Get Phones and Appliances Fixed—But Often, They Can’t

If Andre manages to get his battery replaced, he’ll be outside the norm. Just 16 percent of Americans who had a phone break in the past five years say that the most recent time it happened, they fixed it at home or got it repaired professionally, according to a new nationally representative survey (PDF) of 2,075 U.S. adults conducted in November and December 2021 by Consumer Reports.

Often, it wasn’t for lack of trying. One-quarter of people who had a phone that broke set out to repair it but ended up replacing it, our survey found. For many, the cost of repairs was too high; others said it was just too inconvenient. 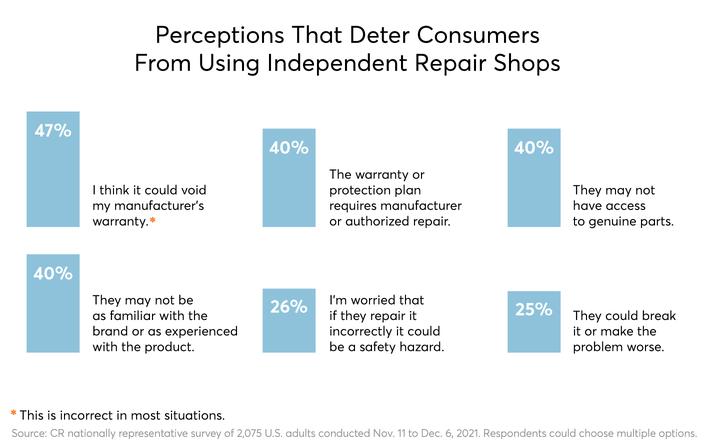 “This tells a story about consumers who have an interest and a desire for repair, but feel frustrated and stymied by the market,” says Aaron Perzanowski, a professor at the Case Western Reserve University law school and author of a new book, “The Right to Repair” (Cambridge University Press, 2021).

Each failed fix adds to the staggering volume of harmful e-waste produced in the U.S., and stokes demand for new devices built with rare natural resources, Perzanowski says. Plus, it’s expensive for consumers: A new smartphone can cost many hundreds of dollars, while a simple fix might amount to $50 or $100.

But consumers might have some help on the way. State lawmakers and members of Congress are putting forward new bills that could make it easier to fix the things you own. Perhaps in response, some companies are starting to lift long-standing barriers to repair.

Smartphones were 1 of 5 product categories covered in CR’s recent survey. We also asked about people’s attitudes and experiences with repairing their vehicles, large and small home appliances, and home entertainment products such as TVs and speakers.

For many products, there’s a gap between people’s desire to fix their possessions and their ability to get the repairs done. More than half of Americans say they have replaced at least one of the products CR asked about sooner than they wanted because they couldn’t find someone to fix it. And nearly 6 out of 10 people don’t think consumers have enough choices as far as where to get certain things repaired.