Production of the Amarok with a new top engine has begun: the premium pick-up with a powerful 190/200 kW V6 engine has started rolling off the line at Volkswagen Commercial Vehicles (main Hannover plant). Highlights of the V6 TDI engine: in addition to up to 580 Newton metres of torque also a 10-kW overboost, both unique in pick-ups of this size. The new engine specification is available for the Amarok Highline and Aventura versions. The Amarok Aventura with 190 kW also features new visual elements such as a black roof liner, new 20-inch wheels and a special metallic Peacock Green paintwork, available for the first time on the Amarok.

One of the first vehicles now coming off the line in Hannover with the new top engine specification is an Amarok Aventura with double cab and 3.0-litre V6 TDI. The six-cylinder power unit with 190 kW/252 PS plus additional overboost has 4MOTION four-wheel drive and 8-speed automatic transmission as standard. Finished in metallic Ravenna Blue, the pick-up has 20-inch alloy wheels that go by the name ‘Talca’.

More torque, 580 Newton metres instead of the 550 Nm to date, and appreciably more power – sure to delight both commercial users and private customers. The new Amarok engine’s full torque is already available at between 1,400 and 3,000 rpm and the full power output from 3,250 to 4,000 rpm. 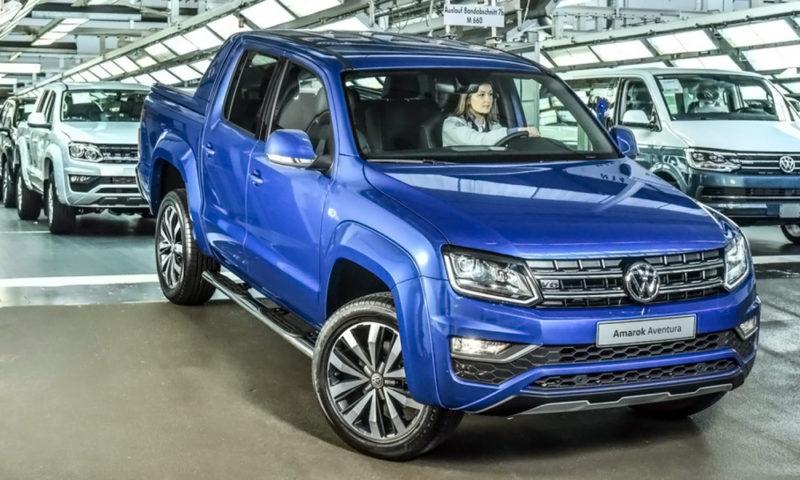 Also unique in its segment is the power output of the new Amarok V6: 258 PS, and using the temporarily available overboost even as much as 272 PS. The Amarok Highline and Amarok Aventura are thus making a clear statement: with 190 kW, or when using the overboost by kicking down on the accelerator briefly even 200 kW, the Amarok has gone up a good notch higher compared to the previously available output level of 165 kW.

Permanent 4MOTION all-wheel drive and an 8-speed automatic gearbox come as standard on the Amarok with the new top engine – both on the Highline and the Aventura. The Amarok with the new, larger V6 engine under the hood also has a number of additional visual modifications: roof liner, pillar trim and other roof elements in the Amarok Aventura are, for example, in titanium black. Together with the seats in titanium black Nappa leather, they produce a very harmonious, appealing look. The new top specification engine runs in the case of the Amarok Aventura on 20-inch ‘Talca’ wheels in Dark Graphite with a high-gloss surface. In addition, metallic Peacock Green paintwork, not previously offered for the Amarok, is available exclusively for the 190 kW Aventura built in Hannover. Together with the sports bar in vehicle body colour, it underlines the model’s sporty overall impression. Still available alongside this are the optional matt paint finishes (Indium Grey, Ravenna Blue) and the previous Ravenna Blue metallic paintwork, which gives the Aventura its exclusive extra something.

Functions such as bi-xenon headlights with LED daytime running lights continue to be part of the standard specification of the new 190 kW V6 Amarok Highline and Aventura. The Light & Sight pack (Leaving and Coming Home function and intermittent wiper function with rain sensor), front fog lights with cornering lights and electric fold-in exterior mirrors are also standard features on the Aventura and available as options on the Highline. The optionally available RCS, short for Roll Cover System, a movable cover for the 2.52 square metre cargo box, is now in a shimmering silver aluminium look. The cover provides protection from, for instance, dust, moisture and prying eyes. The size of the cargo box represents by the way another new benchmark in this pick-up segment. The designer skid plate under the front end of the Amarok Aventura is also now coloured right through in silver.

The Volkswagen Amarok with the V6 diesel engine is a real winner. A fact acknowledged not least by representatives of the international press. Having voted the Amarok the best ‘International Pick-up’ in 2010, they have awarded it the title again for 2018 – a unique feat in its class!