A dad was shocked to wake up one morning to find out a stranger had left their car in the driveway of his home near Manchester Airport.

Engineering lecturer Zekarias Haile claims he had to wait four days for the driver to come back and pick up his vehicle.

He said the rogue vehicle was left by holidaymakers flying out from the nearby hub, where parking is expensive.

Zekarias, 51, who lives with his wife and two children in Woodhouse Park, Wythenshawe, said the vehicle was parked in a way that restricted the family's access to the garden and bins.

The lecturer in Engineering at Wakefield College told the Manchester Evening News : “I just went out and it was there.

“Then it was there Thursday, Friday, Saturday, Sunday. On Monday morning when we woke up it was gone.”

Get the news you want straight to your inbox.Sign up for a Mirror newsletter here

Zekarias called the police, who said it was not a criminal offence and there was nothing they could do as his car, which he’d parked on the road, was not being blocked in.

The unwanted vehicle, however, had restricted easy access to the garden and, crucially, to their bins.

Zekarias added: “I was very angry but I resisted doing anything to the car - just. I definitely didn’t feel all right about it. We couldn’t access our garden and we couldn’t take out our bins."

The family have been living in Wythenshawe for 14 years and are aware that rogue parking companies operate in the area. They suspect that whoever left the Range Rover could have been working for one of these cowboy outfits. 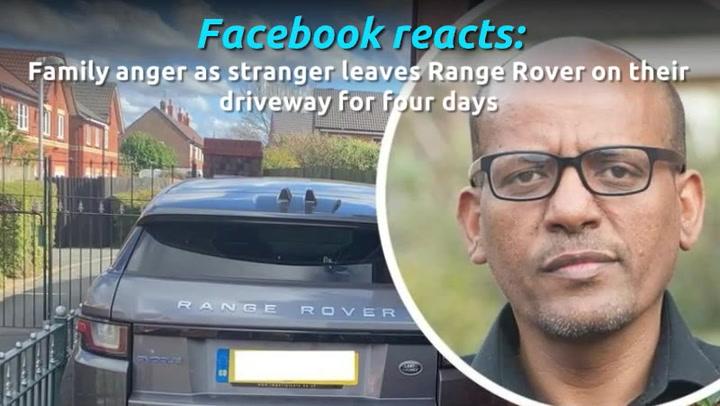 He added: “A lady who was out the front when it was left told me the driver was wearing a high-viz jacket so I do believe it was one of those companies.

"My worry now is that, because I couldn’t do anything about it, it will happen again.

“There are rogue parking firms who claim they are meet and greet and they just park in our area. It’s a violation of my private property.”

Parking around Manchester Airport has long been a thorny topic. In 2016 , an investigation by the Manchester Evening News into firms parking holidaymakers' cars in fields and pub car parks led to a crackdown, but the problem has since reared its head again.

The Manchester Evening News has continued to report issues for both holidaymakers and Wythenshawe residents when it comes to parking around the hub. With official parking at Manchester Airport not always a cheap deal for travellers, some firms looking to undercut them have been known to take short-cuts, while the business potential of parking has even led some homeowners to rent out their driveways for a quick buck.

However, Zekarias has made it clear he has no interest in renting out his driveway, and certainly not to a stranger for free.

A Greater Manchester Police spokesperson confirmed the matter was not a criminal offence but that the homeowners could approach the council and take civil action.

The MEN has approached Manchester Council for comment and to see if there are any ongoing investigations into rogue parking firms.

"We categorically do not condone the practices of rogue operators, including those that falsely imply customers’ cars will be parked in secure locations and whose activities blight surrounding communities.

"We have worked closely with council trading standards teams and Greater Manchester Police over many years to combat this, and speak regularly with local councillors and residents about their concerns.

"As passenger numbers continue to increase in the wake of the pandemic we will maintain our position on this, working closely with Manchester City Council and Greater Manchester Police."