Connell was fielding at midwicket at the time and her teammates rushed to her side, before medical personnel ran on to give her treatment. The 29-year-old ended up leaving the ground in an ambulance.

The incident occurred during the 47th over of Bangladesh's innings, with the game getting brought to a halt. Play eventually resumed and the West Indies went on to win the game by just four runs, bowling Bangladesh out for 136.

Speaking after the win, Connell's teammate Hayley Matthews offered an update on her condition. "Obviously it's a bit worrying seeing her going down like that," she said.

"She is a fighter, not sure what is wrong with her but hopefully she is all right. She is a strong girl and we're backing her to get well soon." 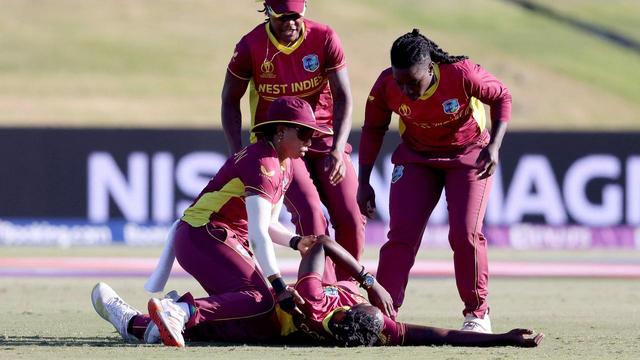 West Indies captain Stafanie Taylor added: "[She's] stable and the medical personnel is taking care of her. It was sad to see her go down.

"But we need to look at the bright side - it was time for us to regroup, we came back and changed the momentum." The win leaves West Indies third in the table with three victories from five matches and they are well set to qualify for the semi-finals.

Matthews was named player of the match after taking career-best figures of 4-15. The 23-year-old is enjoying an excellent tournament so far with both bat and ball and is currently the fourth-leading run and the joint leading wicket-taker at the tournament so far.

"Over the last year or so, I was able to understand a lot about bowling offspin in certain situations," Matthews added of her improvement as a bowler. "[I have been] working on my technique, getting my hand coming from a bit higher, trying to get as many revs as possible.

"What's more important for me is to control where I am pitching the ball. As a tall girl, helps me get a bit more bounce as well."