An Aussie mum has created a stir on social media after revealing photos of the lint collected in a secret part of her dryer.

Sharing on a popular Facebook page, Li said she became concerned about her ALDI appliance after noticing a burning smell.

While Li regularly cleaned the lint in the front of the dryer, she was unaware that debris could also collect in the fan at the back of the unit.

For more Lifestyle related news and videos check out Lifestyle >>

Li shared snaps of the huge amount of lint hiding in the little-known back area, saying she was shocked.

“Here is all of the lint that was in the exhaust fan of my dryer,” she wrote on the Mums Who Clean Facebook page.

“Yesterday I smelled burning which is what made me investigate.”

“I accessed this fan through the back of my dryer, I took off the back plate, took off the belts, stabiliser and back drum plates, many swear words were said. 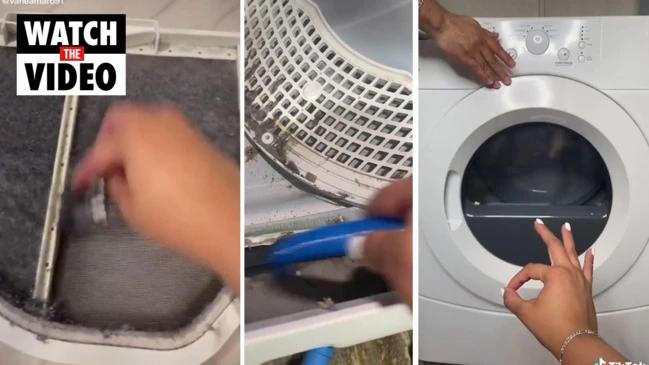 Sharing a photo from inside the drum, she wrote: “You can see the build up. My lint filter - which I clean before every load - sits in front of this.”

Li also shared a snap of the back of her dryer, adding: “This is after I took the back of the dryer off, the fan underneath that centre part.”

Many were shocked by the amount of lint in the back fan of the dryer - which many thought looked like mice in the photos.

“OMG, I thought it was mice,” wrote another.

Added a third: “I thought it was a bunch of dead rats/mice!”

Others said Li was lucky to have found the lint when she did, pointing out the potential risks.

The post also prompted many to rush to check their own appliances.

“You are fortunate you broke the bolt! That’s a huge fire hazard. This is a way better outcome than what could’ve been,” said one.

Added another: “Wow that was a fire waiting to happen. I will have to look at mine now.”

Wrote a third: “Checking my dryer now, thank you for the warning.”

Said one more: “You are very lucky that didn’t catch fire. I personally know two people whose house fires originated from their dryers.”