High levels of cocaine were found on several surfaces at a Brighton pizza parlour, prompting police to seek a review of the premises’ late licence.

They were also concerned after a fight at My Yummie Pizza, in Longridge Avenue, Saltdean, and other complaints about disturbances and anti-social behaviour.

The way that the business operated its security cameras also broke the conditions of its late-night refreshment licence, which permits the business to trade after 11pm.

The owner, Khaled Mohamed, applied to Brighton and Hove City Council to be allowed to trade even later.

But a council licensing panel refused permission because of problems linked to noise and behaviour at the premises.

Now, Sussex Police has asked the council to review the late licence which could result in an 11pm closing time. 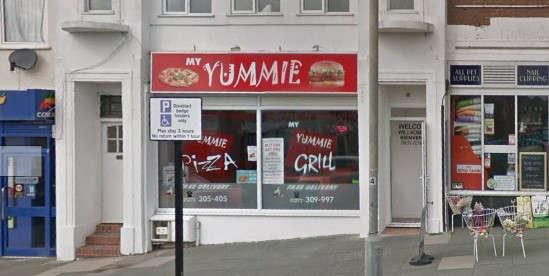 The force said that, on Thursday 9 September, officers took drug swabs because the licensing team had “intelligence” about drug use at the business.

Five of the eight swabs indicated “bulk” amounts of cocaine on surfaces including two toilet seats and on a cistern, shelf and sink in the premises’ toilets.

The till screen also showed traces of cocaine as did other parts of the premises.

Inspector Michelle Palmer-Harris, from Sussex Police, said: “Within 15 months of holding a late-night refreshment premises licence, My Yummie Pizza has experienced a high number of issues including a serious incident, crime and anti-social behaviour, condition breaches despite words of advice from the licensing police officer and lastly high drug readings.

“Due to the lack of management action to rectify the previous breaches and the presence of drug use within this premises, it is difficult to see what further conditions could be added or other measures could be adopted in order to improve the current situation.

“Therefore, the recommendation of Sussex Police would therefore be the revocation of this premises licence.”

A licensing panel made up of three councillors is due review the licence at 10am on Friday morning (26 November). The hearing is scheduled to be webcast on the council’s website.

LIKE WHAT WE DO? HELP US TO DO MORE OF IT BY DONATING HERE.

And don't forget to sign up to our email newsletter, bringing you the week's biggest stories every Thursday.