It was all going well for this cocker spaniel at Crufts until she just couldn't hold it in any longer.

Competing in the intermediate dogs category, the nine-year-old performed well over the first few obstacles before dodging a tunnel to instead release yesterday's dinner.

Handler Maddie Newton collapsed over in disappointment when she saw La Lady Luna sneaking off for a toilet trip during the course.

The commentator added: "I think that's know as stopping for a bit of pressing business.

Sign up to our TeamDogs newsletter for your weekly dose of dog news, pictures and stories.

"That's an elimination and another one for the bloopers section."

Handing the poo bag to the judge, Maddie and La Lady Luna completed the course despite already being disqualified.

"That's very sporting of the judge because if I had been stood out there, and I have been, I think I would have said 'Well it's yours'," added the commentator.

"Every dog owner knows what happened there and Luna giving us a round to remember."

Laughing at little La Lady Luna, one viewer said: "Running makes dogs go - it's a natural laxative for them." 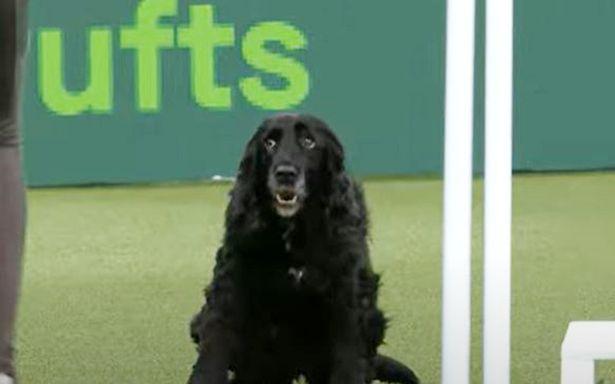 While another user said: "Another year, another pooper."

Luna's mishap comes just minutes after a rescue dog stole the audiences' heart after completely ignoring her handler to instead zoom around the arena.

The medium-sized dog skipped all jumps and obstacles in her path to simply enjoy her "freedom" after a long day of waiting around.

One commentator said: "Here we go, she's off. This is more like it. This is what we want from rescue dog agility.

"Why should I come back when everybody is laughing at me - I am the centre of attention and it's pretty great."

Speaking the dog's mind, another commentator added: "I'm just going to enjoy this arena. This is my time to shine - a few laps.

"I see this lovely big space and that means I can have a good old run around."

Representing Happily Ever After Dog Rescue, the dog has quickly become a fan favourite, with people commenting on how adorable she is.

One viewer said: "This pup has a mine of her own haha!"

While another added: "Freeedommm! She's got the zoomies. So cute - this has been the best one so far."

Do you have a cute dog story to share? Email paige.freshwater@reachplc.com.