Redwoods are among the most well-studied trees on the planet, and yet their mysteries continue to surprise and delight scientists and nature lovers.

Scientists from the University of California, Davis, discovered that redwood trees have two types of leaves, and those leaves have completely different jobs, according to a study in the American Journal of Botany. Together, these functionally distinct leaves allow the world’s tallest trees to thrive in both wet and dry parts of their range in California, without sacrificing water or food.

The peripheral leaf spends its working hours making the tree’s food – converting sunlight into sugar through photosynthesis. Its colleague, the axial leaf, does almost nothing to help with photosynthesis. Instead its specialty is to absorb water. In fact, the study found that a large redwood can absorb up to 14 gallons of water in just the first hour its leaves are wet.

How does that compare to other trees? Scientists don’t know. This is the first study estimating whole-crown water absorption in a large, mature tree. Because large redwoods have over 100 million leaves, this absorption record may prove hard to beat.

In wet forests, photosynthesis can be inhibited by films of water covering leaf stomata when they get wet. For redwoods, the different leaf types allow the trees to get wet and still be able to photosynthesize. The peripheral leaves have a waxy coating that slows water absorption but may help them continue photosynthesis throughout the wet season. 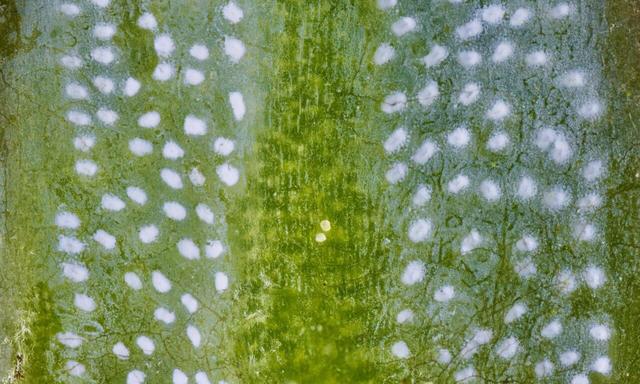 “I’d be surprised if there weren’t a lot of conifers doing this,” said lead author Alana Chin, a Ph.D. student in ecology with the UC Davis Department of Plant Sciences at the time of the study. “Having leaves that aren’t for photosynthesis is in itself surprising. If you’re a tree, you don’t want to have a leaf that’s not photosynthesizing unless there’s a very good reason for it.”

The study also found that leaves can shift their “office space” along the tree depending on whether the environment is wet or dry.

In the wet, rainy north coast, the water-absorbing leaf type is found on the tree’s lower branches, leaving the upper, sunnier levels to the photosynthesizing leaf type. That dynamic flips for redwoods in their southern range: The water-collectors live among the tree’s higher levels to take more advantage of fog and rain, which occur less often in the drier environment.

To arrive at their findings, the authors collected shoot clusters from six redwood trees at five forest locations stretching from wet Del Norte County to the dry Santa Cruz Mountains and exposed them to experimental fog. They estimated the water absorption potential for seven additional trees – including the tallest living tree – and took samples at varying heights.

They then compared the anatomy and measured photosynthesis of the peripheral and axial leaves to understand their function. They also developed a physics-based causal model that allowed them to determine the leaf traits that regulate absorption rates.

Amid all the findings, Chin is most excited to have found an easy and effective way to indicate redwood trees’ ability to access fog. Researchers can monitor how and if redwoods are adapting to climate conditions and a future, drier world by simply looking at the visible waxes covering the two types of leaves – something that could be captured on a cell phone camera and shared by other scientists or even members of the public.

Redwoods are renowned for their resilience in the face of many natural threats and inspire numerous superlatives: They are among the planet’s biggest, tallest, oldest trees. They have tannin-rich heartwood, fire-resistant bark and pest-resistant leaves. This new finding is another example of their ability to respond to environmental conditions, like drought and water stress.

“The cool thing here is their ability to thrive under all these circumstances and adjust themselves to these different environments,” said Chin, who grew up near the redwoods in Mendocino County. “That things like this can be happening right under our nose in one of the best-studied species out there – none of us assumed this would be the story.”

The study was funded by the National Science Foundation and a Katherine Esau Fellowship from UC Davis.