George Mitchell: Why we must save Bon Accord Baths

Public bathing first came to Aberdeen in 1898 with the opening of the Bathing Station at Aberdeen Beach.

Then in the 1930s, the search was on to find a suitable city-centre site for a better facility.

Plans were dawn up by Alexander McRobbie of City Architects Department, and in 1936 the foundation stone was laid for what became known as the Uptown Baths – or Bon Accord Baths as we know them today.

The baths were completed at a cost of £37,000 and opened to the public on August 30 1940. They formed a trio of art deco buildings in Aberdeen, alongside the Regent and the Capital Cinemas.

The baths, due to ongoing budget cuts, finally closed its doors in 2008. They have never reopened.

Deemed “surplus to requirements”, the baths lay dormant for years and in 2015 were put on the market by Aberdeen City Council. This led to public protest and ultimately a campaign to save the building, as was originally intended.

Bon Accord Heritage was formed by a team of dedicated helpers and they are working tirelessly to achieve just that.

Structural investigations have taken place and despite much work needed, thankfully, its concrete roof has been deemed structurally sound, and a memorandum was agreed with the council to allow for the restoration of the baths as a community-run facility.

Their aim is to basically preserve this unique building, restore it and get it back up and running again.

I had been granted a tour of the building and was met at the front door by Jack Burnett-Stuart, of Bon Accord Heritage.

It was freezing outside on the day of my visit, and not much warmer inside to be honest. Worth mentioning, from the outside it’s all rather unassuming, but once inside, these baths are nothing short of remarkable.

The reception hall, still covered in the original sycamore wood panelling, is in surprisingly good condition. As is the tiled floor.

Jack led me into the main pool area. I was astonished at how big it is. Being empty and deathly quiet, I got the feeling of being in a cathedral.

The stats are impressive, even today. The pool is 120 ft by 42 ft and can accommodate 400 bathers. The deep end is 15 ft, making it the deepest in Scotland. Upstairs, there are even Turkish baths and a plunge pool.

The fixed tier seating all around the pool can accommodate an impressive 1,000 people. The seats are the original wooden ones, and while some are still in good condition, others – as you can see from my photos – are badly damaged due to water.

The actual concrete diving tower itself is also the original one, and the famous top diving board stands 33 ft above the pool side. Twenty wild horses could not drag me up there. No thank you very much.

As I asked questions and Jack replied, it was obvious the passion he and his team have for the task ahead.

But it’s not all about a swimming pool. The private bathing area particularly interested me.

Bath Houses, as they were known, were established in the 1850s after the 1846 act of parliament to “encourage the establishment of public baths and wash-houses… to improve public health”.

In a nutshell, many people came here not to swim or relax, but to wash and get clean, all at a time before such facilities were available in individual homes.

Some of the original baths remain in place today, see my photo. In fact, my dad remembers this practice. 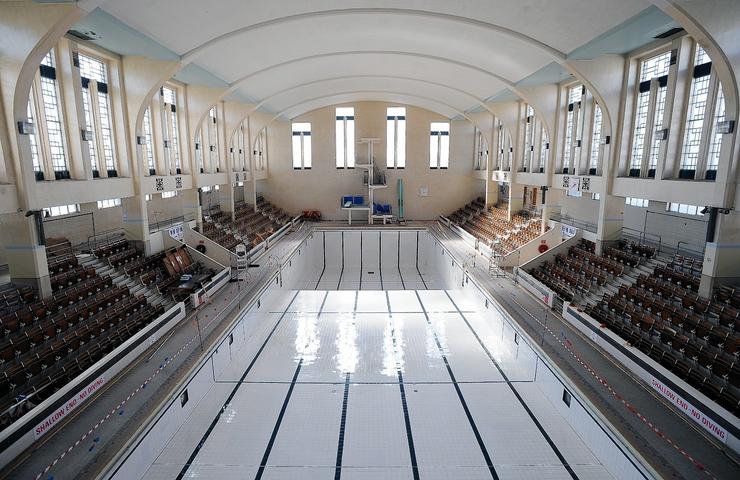 “When young couples like us got married, lots of houses in Aberdeen didn’t have bathrooms,” my dad told me.

“When did you get married? In Queen Victoria’s reign?” I asked.

“As for toilets,” he continued, “you had a toilet on the landing of your flat if you were lucky, or an outside one in the garden, if you were not so lucky.”

Even I remember as a kids in the 70s having an outside toilet at our flat in Crown Street, Aberdeen. Almost impossible to comprehend now.

My dad continued his story.

“As a boy in the Fifties, I went to the Bon Accord Baths, or the Uptown Baths as we always called them, to swim. Then as an adult we went to the baths for a wash.

“How did you bathe as a child then?” I asked.

“Tin bath in front of the coal fire.”

I picture my dad in a tin bath in front of the fire, yet cannot get an image of Steptoe out of my mind…

“You really went to a swimming pool for a wash?” I queried.

“Yes, many did. They had no bathrooms at home remember. Sometimes you could go to friends or family if they had a bath, but for many folks in Aberdeen, they queued up outside the Uptown Baths with a towel and soap.

“Then once inside, you didn’t go to the pool, you went into the washing area. Separate areas for men and women of course. There were individual cubicles and had your own private bath.

“The water, as I recall, was controlled by taps on the outside of your cubicle. If you wanted more hot water, or even cold, you just shouted for the attendant, and he turned on the taps.”

Funding for massive restoration comes later, but right now, the most important aspect is securing the building from wind and rain. Fighting dampness and deterioration is a consent battle.

Sadly, vandalism is also a huge problem. Despite security measure being put into place, the baths have been broken into on numerous occasions, especially during lockdowns.

Fires have been lit, original features destroyed and graffiti daubed all over the walls and in the pool itself.

The Heritage group states: “Our project’s success relies heavily on funding, enthusiasm and goodwill. Without this in place, we cannot progress with saving the baths for future generations.”

It’s high time these once glorious baths were restored to their former glory and open to the public. They really would be a jewel in the crown for Aberdeen city centre.

Basically, if we don’t act now, we risk losing the building forever.

The alternative? Located in the city centre, I’d imagine this site would be prime real-estate…

Bulldozed and turned into flats or an office block?

Aberdeen’s Bon Accord Baths are the only ones of their kind left in Scotland.

We can’t let them be turned into flats or offices.

Should any reader or business want to volunteer with building work, professional services or fundraising ideas, then please do get in touch with the group via their website bonaccordbaths.org.uk