They say goldfish grow to fit the size of their bowl — and when the bowl is a lake, things can get out of hand.

Minnesota officials have issued a warning about dumping pet fish in local waterways, after several football-sized goldfish were recently found in a lake south of Minneapolis.

Photos posted by the city of Burnsville last week show some truly massive goldfish that were pulled out the city’s Keller Lake, where the former pets have grown into a major problem for the ecosystem.

“Please don’t release your pet goldfish into ponds and lakes!” the city tweeted on Friday. “They grow bigger than you think and contribute to poor water quality by mucking up the bottom sediments and uprooting plants.”

Please don't release your pet goldfish into ponds and lakes! They grow bigger than you think and contribute to poor water quality by mucking up the bottom sediments and uprooting plants.Groups of these large goldfish were recently found in Keller Lake. pic.twitter.com/Zmya2Ql1E2

The message echoes several other warnings issued in communities across the United States and Canada, where the former fish-tank curiosities have become scourges on the environment.

Goldfish are relatives of the carp, and they’re just about as hardy. They reproduce easily, they survive in water with low oxygen levels and they don’t die during the frigid Minnesota winters, making them a difficult species to eradicate once they’ve established themselves. 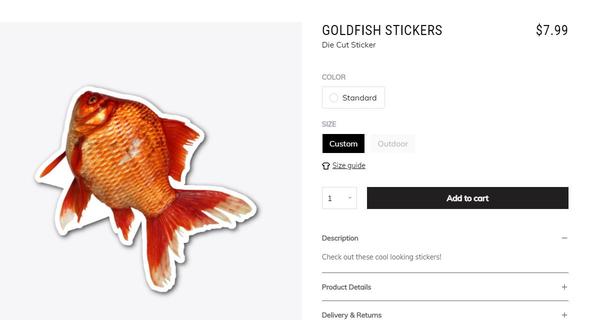 The Burnsville specimens look like comically enlarged versions of the typical fishbowl fare, with giant eyes and pumpkin-orange scales that make them invulnerable to most potential predators.

Read more: Woman dragged out of tent, killed by grizzly bear in Montana

The goldfish are, in essence, the ultimate ecosystem-killing machine, because they will simply eat and breed their way to domination.

Goldfish are now considered an invasive species in parts of Minnesota, including Carver County, where some 50,000 of them were removed from an inlet last fall.

They’re also seen as a major threat to Hamilton Harbour on Lake Ontario, where Fisheries and Oceans Canada is worried that they will spread to the rest of the Great Lakes.

This goldfish caught in the Hamilton Harbour may have looked great in an aquarium, but in our waterways, it’s an #InvasiveSpecies. 🚫 Before disposing of a live aquarium fish while #StayingAtHome take a look at: https://t.co/FP9iKk3kUP #DontLetItLoose #NISAW pic.twitter.com/r5jWHb6q6K

Wildlife experts in Carver County have been trying to cull as many of the fish as possible, as part of a three-year plan to manage and study the species, but they admitted last year that it’s been hard to get the public’s attention with their struggle, especially when goldfish are not as obvious as the invasive Asian carp, which leap out of the water en masse when disturbed.

“It just hasn’t reached a high level of awareness,” University of Minnesota biologist Peter Sorensen told the Associated Press last year. “They don’t jump and knock people out of boats and break bones. But it’s a global issue.”

Officials on both sides of the border have yet to come up with a sweeping anti-goldfish strategy, but they’re watching the problem closely. They’ve also been preaching the same message to pet owners throughout North America.

Their message is simple: Don’t flush your live fish, because there’s a good chance they’ll survive the trip.

— With files from The Associated Press