A groundbreaking biodiversity research project in the Karoo that had cost R82m to set up, came to nought when, less than a quarter way in, its main sponsor, billionaire fund manager Tim Allsop lost interest. Over breakfast one morning in January 2021, he pulled the plug, triggering a legal war of attrition that has gone on for a year with no fewer than eight court applications brought by one or other of the parties. A letter Allsop wrote to his co-trustees in August 2018 shows that already then, his focus was shifting away from the research focus of Smuts and the Landmark Foundation. His focus was on finding a way to avoid the ANC’s threatened expropriation without compensation. This [Last?] week, a summons was issued in which the Landmark Foundation and Dr Bool Smuts are claiming R79.7m in damages from their once most-favoured sponsor.

He advanced the required R60m to his Tamarisk Trust that bought the farms and then, in turn, leased them to the Landmark Trust.

If you have not read the first instalment of the story, we suggest you do so now, here.

In an email letter to his Tamarisk Trust co-trustees, written in August 2018, Tim Allsop had lots of good things to say about the Landmark Foundation’s Shepherding Back Biodiversity Project (SBBP). Some extracts:

“Tamarisk’s farm interest have come a long way since purchase in middle 2015, but Kromelboog, the 100% owned operating company […] has had such large capital spend requirements for building renovation, solar power water pumping equipment etc that it has not even been able to pay the lease. […] This is partly the result of start-up delays, massive stock losses due to predation in 2016/17. [30% of lambs were lost before weaning, as shepherding had still to be introduced.]

“Notwithstanding the precarious state of finances, I am encouraged by the progress made in the use of shepherds to protect and drive the herd (note that not one animal has been lost to predation since shepherding began in early 2017). Moreover, it appears that the steady removal of fencing and trampling and fertilisation of the veld by the herd is having a positive effect on the veld condition.

“Other contributors to Landmark’s ‘Shepherding back biodiversity’ project, (the Development Bank of SA’s Green Fund and the World Bank) have both expressed their satisfaction – the latter pointing to the ‘relevance’ of the project.

“From my perspective, the concept of creating a vast rangeland with no fences, where game moves freely and in balance with a livestock herd to enhance biodiversity is an appealing story. The involvement of shepherds has been effective in nullifying predation losses and there has been employment creation and an up-skilling of these workers with a commensurate increase in wages. There is a positive energy on the farm and much visiting from researchers, conservation groups and NGO’s etc.”

At that stage, Allsop was even promoting the idea of acquiring more neighbouring farmland, but for reasons that suggest – then already – in August 2018, his focus was shifting away from the research focus of Smuts and the Landmark Foundation. Allsop saw the conservation and biodiversity label as a political safety measure to avoid the possibility of expropriation without compensation of the farms he had bought. Ultimately, his focus was on securing the recovery of his investment:

“The political background is giving me the heebie-jeebies,” he wrote to his Tamarisk co-trustees. “I want to consider ways to re-arrange things to create a large growing reserve through a structure that serves to protect the reserve from hijacking by any party, never mind the current political threat. Perhaps the plan should be as follows:

“Growing the range from a current 21000 ha to three times this size would be more consistent with the ecosystem of the Karoo, and by owning the land through a trust where the beneficiaries are not people but nature itself might encourage donor funding to grow the reserve, i.e. Tamarisk sells farms to a new Green Karoo Reserve Trust (GKRT) with strong independent trustees. Being bigger might protect the land from theft especially if no white guy is benefiting and the trustees are respected people in the conservation arena. Tamarisk ends up with a loan account representing the original land cost plus the later loans to Kromelboog – approx. R73m. This loan account is serviced from lease income received by the GKRT which income should grow from a current R600k pa to R1.8m pa (3% of the land cost) over the next five years and by the SA inflation rate after that.”

When arguing this proposition, he is clearly having no regard for the research being done by Landmark. Firstly, it cannot change terrain halfway through the project without undermining the scientific validity of the project. Secondly, it cannot exclude people as beneficiaries, as the proposition it hopes to prove is that ranch farming and wildlife biodiversity can co-existent on the same semi-arid land.

In fairness, it should be noted that Allsop concluded by stating: “All new donor funding is placed in reserve for land acquisition, and not used to service/pay down the Tamarisk loan.”

To date, that grand plan has not come about.

That letter was not the only indicator of a difference in focus between Allsop and his Tamarisk Trust on the one hand and Smuts and his Landmark Foundation on the other. 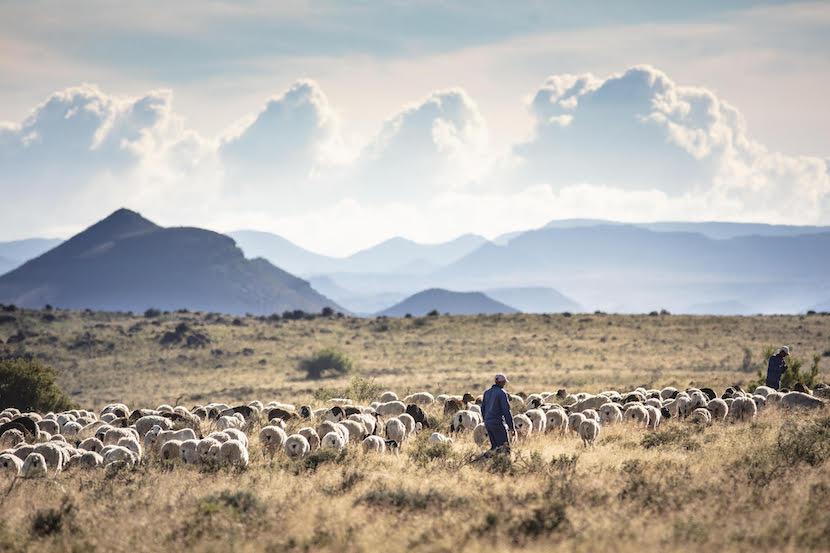 In the first two years, Smuts and his team of workers had gone all out in restoring the existing buildings on the farms, most of them completely derelict, some without roofs. New three-roomed cottages with toilets and hot water were built for the shepherds and other workers. The farmhouse on Little England – the most substantial of all – and its various outbuildings were completely renovated and extended, as was a nearby cottage known as Gumtree. They were to have accommodated the shepherding academy and research staff, plus visiting groups of academics and students interested in the project.

On an early visit, Allsop enquired where the most recent student group had come from. When told they were from the University of the Western Cape, he was outraged: “I don’t want their dirty arses on my toilet seats!” He promptly insisted the house and its precinct, plus Gumtree cottage, were for his personal use and that of his relatives and guests only. A garden consultant was hired to lay out a garden with lawns and shrubs and to plant trees round it at a cost of R350,000. The swimming pool was restored and filled, and a full-time gardener and housekeeper were employed.

The shepherding academy and Dr McManus moved to a house on a neighbouring farm.

“Tim, sometimes with guests, now and again came to the farm, but to my recollection never for more than 10 days in any year. For the rest, the Little England homestead and cottage remained cared for but unoccupied,” Smuts told BizNews.

Allsop bought a Ford Everest 3.2 litre 4×4 costing R700,000 on the company’s account and drove off with it to Cape Town.

“At the time I indulged all that because I assumed that’s how the ultra-rich operate and he was, after all, our major sponsor. Without him, we would not have had access to those farms for our project.”

Smuts records in an affidavit, that in mid-December 2020, “Allsop [on his first visit to the farm in that year of Covid-19 lockdown] indicated he wanted to bring in a partner or find a substitute partner for the Shepherding Back Biodiversity Project, and/or sell out part of his ‘interests’ in our joint venture to such a partner.

“He also told me that he had recently developed an interest in a hotel in Greece and wanted instead to invest his ‘philanthropic contributions’ in it. In retrospect, he was clearly contemplating reneging on his and his trust’s obligations under the JV, for reasons that were anything but philanthropic.”

They discussed how they might do this and who they might approach as a potential new sponsor/donor.

The bottom line option, at least in theory, was that they simply call it a day and walk away from the joint venture, an option that Smuts recorded, but was not prepared to contemplate. In such a case, Allsop would walk off with all the renovated assets while Smuts and his co-researcher, Dr Jeannine McManus would have to write off an extremely important – but incomplete – research project to which they had devoted 10 years of their lives and which had cost donors more than R24m to set up.

In addition, 18 people would lose their jobs and homes that were supposed to be secure for at least another 10 years.

On 28 December, Smuts sent Allsop a draft of a possible pitch to a prospective additional or substitute funder for the farms.

By 31 December 2020 – the date on which the establishment phase of the project (and the donor funding) formally ended – on the farms, the project was achieving everything it was intended to achieve: the flock of sheep had more than doubled, as had the cattle herd. Income from sales had brought them to breakeven. The veld was in measurably better shape than it had ever been. The number of mammalian wildlife species recorded on the project’s field cameras had grown from 24 in the first year, to 38 in 2020, significantly more than were recorded on comparative sites. Besides herds of various kinds of antelope, they included the rare brown hyena, honey badgers, an aardwolf (that, despite what its name might imply, eats only insects), an aardvark and a black-footed cat.

Late on the 31st, Smuts received a message from Allsop saying he was on his way to Little England and hoped to meet Smuts there on New Year’s Day. No word of what his pitch for a new funder might have achieved in the days between Christmas and New Year. Smuts was elsewhere committed with his family and made it to the Beaufort West farm only in the evening of the 4th, to find that Allsop had gone to bed early.

The next morning, Smuts already had cups and a coffee pot out on the stoep, when Allsop emerged with a friendly, “Good morning!” Then, settled with his cup of coffee in hand, he announced: “I’ve been thinking. I would like you and Landmark to leave the farms.”

Smuts, rarely short for words, was momentarily dumbstruck. He recalls: “He seemed completely detached from the implications of what he was asking for. When I asked him what this was all about, his answer was: ‘It looks like Landmark has lost focus.’

“Then I lost my temper. ‘What the fuck are you talking about? We are at the top of the game. We do cutting-edge scientific research on this property. A scientific report on our research to date is in the process of being written. We have turned around production and our income is starting to reflect that.’

“Allsop’s confused response, waving his hand in that direction, was: ‘Look around here. The gutter is leaking.’ (It had rained in the night.) Then he simply turned and walked away.”

* When, a year later, BizNews asked Allsop why he had withdrawn his support from the project, his explanation was: “There is no more market for mutton and lamb. Look at the supermarket shelves: the price of lamb is too high. For both health and economic reasons, consumers everywhere are buying chicken.”