Quad-City nursing homes fined $125,000 for broken nose of a resident, neglect of others

Four Quad-City nursing homes have been cited by the Illinois Department of Public Health and fined a total of $125,000 related to the abuse and neglect of residents, including an accident that left a man with a broken nose, according to recent reports from the state.

The nursing facilities that were cited are Allure in East Moline, River Crossing and Heartland in Moline, and Generations in Rock Island.

Allure of Moline, 430 30th Ave., East Moline, was fined $25,000 and cited for six licensure violations related to a vehicle crash in which a male resident broke his nose when he was thrown from his wheelchair because his seat belt had not been secured.

According to the IDPH report, the resident was being transported in the facility's van to a medical appointment April 14, when the driver had to brake suddenly to avoid a collision with a semi-tractor trailer on the highway.

The resident was thrown from his wheelchair and hit the center console, causing multiple lacerations to his face that required stitches above both eyebrows, his nose and his upper lip, in addition to bruising to both eyes and facial swelling.

The resident told investigators he had not unlatched or manipulated his seat belt.

"In my opinion, both (facility) drivers follow too close to the car ahead of them," the resident said. "(The driver) was driving too fast and following too close."

The resident said after the accident, the driver apologized to him repeatedly.

Katie Hughes, administrator for Allure of Moline, said she could not speak about the incident since it occurred before her being hired in June.

"I was not involved in that plan of correction," Hughes said. "There is a whole new system in place, and rigorous training has been done since that incident. We are doing a lot to make positive changes."

River Crossing of Moline, 7300 34th Ave., was fined $50,000 and cited for 10 licensure violations related to the abuse and neglect of two residents.

In one case, staff was cited for neglect for failing to report possible suicidal behavior exhibited by an elderly male resident and for failing to provide mental health services and increased supervision in a timely manner.

The resident had been transferred from an out-of-state care facility on Aug. 5, 2020, with a seizure disorder, diabetes, anxiety and recurrent depression. According to the IDPH report, nursing staff observed the resident was sleeping more than normal and kept the curtains in his room closed. He told a physician that he would no longer take his medications.

In May, the resident asked an employee to read a journal he kept in which he wrote: "I want to die. I'm so alone. I have massive depression. My son lives nearby but rarely visits. If only I could die. If only I could. To think I went to war, was wounded and lost body parts, got a few awards and wound up here?" 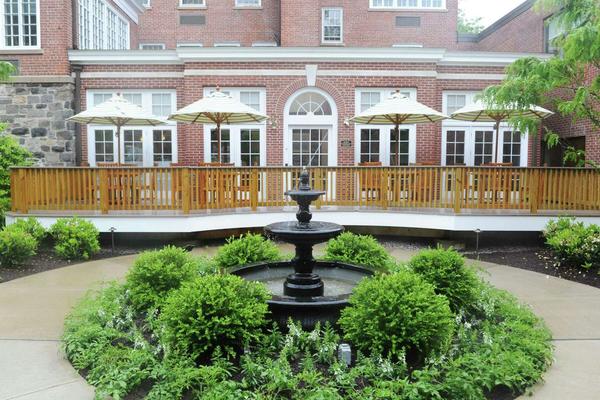 The man was admitted to the hospital for evaluation later that month.

The IDPH report states the facility "failed to provide behavioral health care services and interventions" after the resident expressed "feelings of worthlessness, recurrent thoughts of wanting to die and expressions of emotional pain."

The director of nursing stated to IDPH investigators that she would have sent the resident to the hospital immediately after reading his journal.

In the second case, River Crossing was cited for failing to construct a secure barrier between the COVID-19 positive unit and the non-COVID unit; failure to provide dedicated staff for the COVID-19 unit; failure to follow proper use of personal protective equipment; and failure to ensure non-quarantined residents, staff and vendors wore PPE while in the facility during a COVID-19 outbreak.

"These failures resulted in the spread of COVID-19 among residents and staff and have the potential to affect all 102 residents residing within the facility," the report states.

Heartland of Moline, 833 16th Ave., was fined $25,000 and cited for three licensure violations after the facility failed to give a 78-year-old male resident thickened liquids, resulting in his hospitalization for aspiration pneumonia in June.

According to the IDPH report, the "facility failed to provide thickened liquids as ordered by a physician" after the resident was diagnosed with dysphasia (difficulty swallowing).

In June, a registered nurse observed the man drinking a glass of water that didn't contain thickening nectar. Shortly thereafter, he had a crackling cough, poor color, low oxygen levels and a fever. He was transported by ambulance to a nearby hospital.

Kelly Kessler, director of marketing and communications, said ProMedica Skilled Nursing and Rehabilitation in Moline "has high standards of delivering quality care to our community," and any issues raised during the survey process were addressed and corrected "as quickly as possible."

"It is ProMedica's intent to be in full compliance, and we have internal measures in place such as employee in-services and monitoring systems to review and improve the quality of care provided to our residents," Kessler said. "We feel we have appropriate safety and care protocol measures in place to ensure resident safety.

"In accordance with federal and state laws and regulations and due to our commitment to patient confidentiality and resident rights, it is our policy not to discuss individual patients who reside or have resided in the facility."

Generations at Rock Island, 2545 24th St., was fined $25,000 and cited for two licensure violations related to its failure to secure a catheter with adequate slack in a male resident, resulting in a permanent tear to his penis.

According to the IDPH report, the resident was admitted to the facility with diabetes and chronic kidney disease requiring dialysis. The man told IDPH investigators that in October 2020 a certified nursing assistant (CNA) removed his pants too quickly, ripping the catheter through his penis.

"I don't have the catheter anymore," the man said. "I tried to use the urinal, but urine comes out the side of my penis and gets everywhere, so now I have to go in my (adult brief). I've tried urinating in the toilet, but I have the same issue of urine going everywhere."

Baalke said the company was contesting the allegations.

"Generations at Rock Island prides itself on providing high-quality care to each of its residents," Baalke said. "Its staff provide compassionate care that complies with all state requirements. HIPAA and privacy concerns prevent the facility from commenting any further regarding this matter."

* I understand and agree that registration on or use of this site constitutes agreement to its user agreement and privacy policy.Your notification has been saved. There was a problem saving your notification.

Email notifications are only sent once a day, and only if there are new matching items.