Research scientists in Norway recently set out on a scientific cruise in the Trondheim fjord to collect water samples and specimens of marine species.What they stumbled over was quite different from what they were looking for.

Rare earth elements are key components in many of the technologies that we use in our everyday lives—from batteries and mobile telephones to fertilizers. But these elements can leak out into the sea as pollution, and be absorbed by, and have a negative impact on, marine life. In order to research this phenomenon, researchers were out taking samples in the Trondheim fjord, and a natural site for their sampling work was a wastewater plant located at the fjordside.

However, thefindings the research scientists from SINTEF and NTNU turned out to be somewhat different from what they had expected.

"We ran a trawl along the seabed in the hopes of collecting a number of organisms that we wanted to study, but instead ended up mostly with wet wipes and female hygiene products," says Julia Farkas. "Even after only ten minutes and a single run along the seabed, the trawl was filled with this type of rubbish," she says. Farkas is Project Manager for a research project called Elementary, which is being carried out in collaboration with Nord University and NTNU, among others, and coordinated by SINTEF.

"We were trying to collect starfish on which to run tests, but instead we ended up finding more of those small cosmetic glitter stars than we did real starfish," says fieldwork coordinator Tomasz Ciesielski,a senior research scientist at NTNU.

The researchers assume that this problem is widespread in other geographical areas, both in Norway and around the world.

Where do things go wrong?

Ultimately , everyone knows that products like these do not belong in the ocean. So then how do they end up there? The researchers believe that the problem lies in a combination of misunderstanding and pure ignorance. This leed to pollution.

"In theory, when we flush the toilet, the water is pumped out to the wastewater plant, where it is filtered," says Farkas. "But when we flush wet wipes and such that do not belong in the toilet, the plant infrastructure quickly becomes blocked, and any overflow goes directly into the fjord," she says.

She goes on to explain that many people probably believe that wet wipes are biodegradable, but sadly this is not the case. 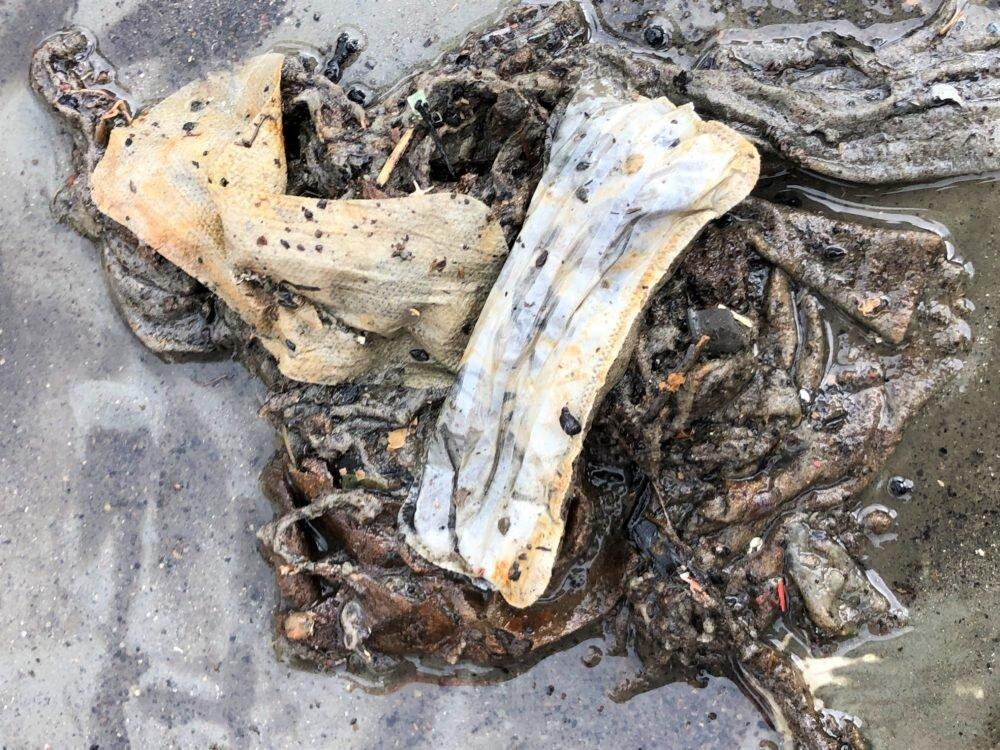 In order to illustrate her point, Farkas fetches a pack of wet wipes from her own bathroom and reads out loud what they are made of. The wipes were of a standard brand and were composed of as much as 60 percente polyethersulphone—a type of plastic known for being resilient and more robust than standard types of plastic, and which breaks down more slowly than natural polymers. This means that such products remain on the seabed for prolonged periods, together with the organisms that live there naturally.

Arne Haarr represents Norsk Vann, which is the Norwegian sector organization for the wastewater treatment industry. He believes it is important to emphasize that the entire industry across Europe is unanimous in its view that toilets must not be thought of as rubbish bins.

"Statements from the manufacturers and suppliers of wet wipes about their products' biodegradability or 'flushability' are making no impression on those who are responsible for operating and maintaining wastewater and sewage systems, either in Norway or across the rest of Europe. Such products create the same problems in the sewage systems, so it remains the case that only three things belong in the toilet," says Haarr.

You can make a difference

Research Manager Andy Booth at SINTEF Ocean says that he understands why this misunderstanding has arisen, and that things could be greatly improved with a little information.

"The vast majority of people don't even know what these wet wipes are made of. Even I have to admit that I had no idea until I had my first child," he says. "When we're changing nappies, we don't really want to throw soiled wet wipes into the rubbish bin in the bathroom. It's easy to think that they're the same as toilet paper and that it's alright just to flush them down the toilet," he says.

Booth goes on to explain that there is a common misunderstanding that we can flush almost anything down the toilet and that the wastewater companies will take care of things. The findings made in the fjord demonstrate that many people believe that all waste is filtered and sorted after they flush it away, but this is not the case. Our existing infrastructure simply cannot deal adequately with these products. The researchers explain that the infrastructure is relatively primitive, so that only toilet paper and the waste products of our bodily functions should be flushed away.

The pandemic can cause increased ocean pollution

It is easy to think that the toilet is like some magic 'black hole' into which anything you flush away disappears immediately—out of sight and out of mind. But what in fact happens after you flush your toilet can negatively impact the environment.

Waste that ends up in the sea has an impact on biological systems, and may have consequences both for the natural world and for people on land. This applies not only to what we flush down the toilet, but also to other types of waste that are not properly disposed of.

Now that the COVID-19 pandemic is affecting all our everyday lives, there is an increasing dangerof a new type of pollution.

"It's not a big surprise that we are finding disposable face masks discarded in the natural environment," says Booth. "We see all too many of them littering the streets in our towns. They're very light and are easily carried to the ocean by the wind, or flushed into storm drains along our roads only to end up in the sea," he says.