Seattle's Bullitt Center Is Ripping Out Its Composting Toilets

One of the green building's most talked-about features had a few problems.

ByLloyd Alter Lloyd AlterDesign EditorLloyd Alter is Design Editor for Treehugger and teaches Sustainable Design at Ryerson University in Toronto.Learn about our editorial processUpdated May 29, 2021 04:09PM EDTFact checked byHaley Mast Fact checked byHaley MastHaley Mast is a freelance writer, fact-checker, and small organic farmer in the Columbia River Gorge. She enjoys gardening, reporting on environmental topics, and spending her time outside snowboarding or foraging. Topics of expertise and interest include agriculture, conservation, ecology, and climate science.Learn about our fact checking processNews

Denis Hayes, CEO of the Bullitt Foundation, calls Seattle's Bullitt Center "a giant science project." Hayes says: "We integrated lots of bleeding-edge technologies. If everything had worked perfectly, that might have meant we hadn’t been bold enough."

One of those technologies was its use of composting toilets. I raved about them in an archived post, calling the washrooms in the Bullitt Center "the sweetest-smelling loos I have ever been in." That's because there were fans sucking air down through the toilet bowl to the big phoenix composters lined up in the basement of the building.

Engineer Allison Bailes had one in his house and would say the same thing:

"Whenever anyone went to the bathroom and ... uh ... did their business, the bathroom smelled better than before they went in there. The reason is that as soon as they opened the lid on the toilet, air from the bathroom was being pulled down through the toilet, into the basement tank, and then sent out through the roof."

There are many benefits to composting toilets. It's silly to use millions of gallons of drinking water to wash away what for millennia was considered a valuable resource—poop, which made excellent fertilizer, and pee, which was full of valuable potassium—and then try and clean it up before it gets dumped in the ocean or river. And as the sign at the Bullitt Center noted, it uses 96% less water.

It takes a huge amount of energy to purify water and distribute it and then treat it once it is used. According to the white paper from the Bullitt Center, "in California, water-related energy use consumes 19 percent of the state's electricity, 30 percent of its natural gas and 88 billion gallons of diesel fuel every year." Add in all the natural gas and coal used to make the fertilizer that replaced the poop (3% of the world's emissions) and you are talking serious carbon.

It's probably healthier too. We noted earlier that there is a plume of bacteria and aerosols that are launched into the air when people flush, and suggested that people "flush and run" after using a conventional toilet. With a composter, there is no flushing and you can take your time.

As a science project, the composting toilets at the Bullitt Center were a huge success; much was learned. As toilets for people working in and visiting the building, and the Foundation that operates it, they were not such a success. Some of the reasons were technical:

The waste is not distributed evenly. Because each stack went to one composter in the basement, some toilets filled up more than others. For instance, the composters that served the men's washrooms filled up more quickly than the women's, because of the well-known phenomenon that men eat more food and produce more poop. This "caused inefficiencies, particularly when it came to emptying the composters. Rather than filling a truck by emptying all ten at once, the Bullitt Center had to empty the composters at different times." The white paper notes unisex bathrooms could mitigate this problem.

Managing one building is hard. The waste from the toilets had to be driven 52 miles to a secondary treatment facility (you have to let it sit for a while to ensure that all the bacteria are killed) in the partially loaded truck. It's as if your garbage was picked up from a single house and driven to the next city; if this was done on a neighborhood or campus scale then the pickup and management could be much more efficient. 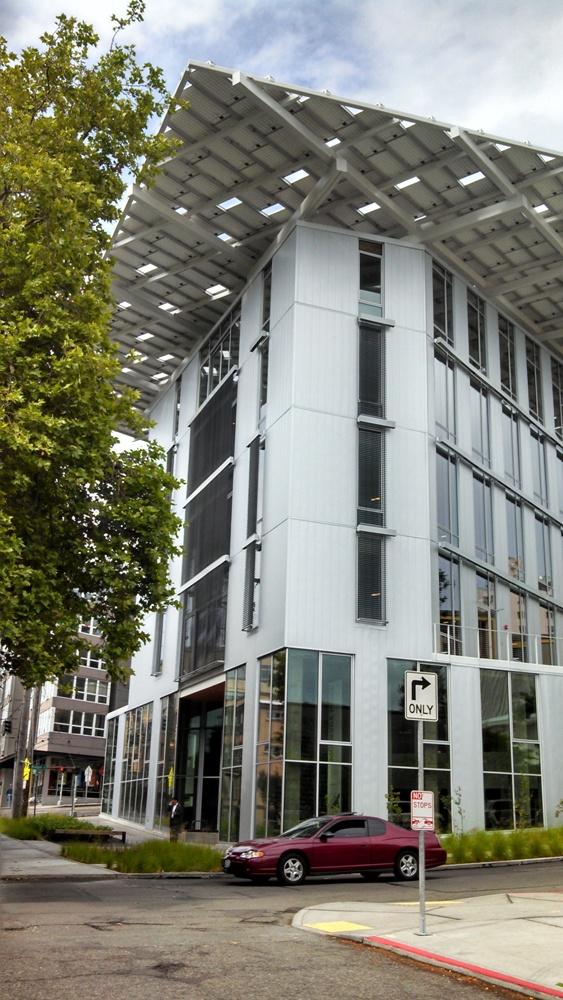 It wasn't resilient. If the power went out or the fans needed maintenance, "smells from the composters moved quickly into the bathrooms and office spaces, which was not popular."

The drainage was poor. The leachate tank (the liquid that drains off, mostly pee) and the toilets both were sitting on the flat floor. In the photo of Allison Bailes' toilet, the same brand as at the Bullitt, the toilet is raised for this reason.

The user experience was not quite what was expected. There were "far greater maintenance issues with the foam flush system than it had anticipated. Fully one-half of all the building engineer’s time on-site was spent dealing with problems in the composters or the toilets, and the work was often quite unpleasant."

This is all polite language describing the fact that the foam didn't do the job that it was supposed to, that the bowls were often soiled, often with toilet paper residue stuck on the inside, and the day porters were constantly having to clean them.

This is a cultural problem rather than a functional one.

In North American commercial washrooms we are used to big bowls with a big target, with flush valves connected to high-pressure water lines and a very powerful flush. That's the American Standard.

In Europe, the toilets in commercial installations were often the same in-wall units that people have at home and use very little water. There is usually a brush beside every toilet, even in hotels and offices, and people are expected to use it. A quick search on Quora answered the question of why there is always a toilet-brush, and why it gets used:

It's hard enough to get people to use composting toilets in the first place; people are nervous about sitting over a dark hole. Getting North Americans to take responsibility for using a brush and cleaning the bowl after themselves is going to be even harder.

The Bullitt white paper suggests that vacuum flush toilets "can also improve the user experience by keeping the bowl much cleaner than the foam flush system" but they are going to be disappointed: it is a very small bit of water at the bottom, it is a very European toilet experience, and it will often still need to be brushed. The vacuum toilet makes people feel better because they are not sitting on top of a hole, but it's no American Standard swimming pool of a toilet.

There are many lessons to be learned from the science experiment that is the Bullitt Center. There are the obvious functional ones of having room for maintenance, and the operational ones that come from being an island of composting toilets in a city of flush toilets, so there is no economy of scale in dealing with the waste.

But the most interesting ones are cultural—how unisex bathrooms make more sense because they would distribute the waste more evenly, and how people are probably going to have to learn how to use a toilet differently in a low or no flush world.

The Bullitt Foundation deserves great credit for trying this in the first place, but also for producing the white paper that looked at the problem.

In her essay "Civilization & Sludge: Notes on the History of the Management of Human Excreta," Abby Rockefeller described how engineers in Europe and the United States in the mid-nineteenth century debated how to handle human waste.

"The engineers were divided between those who believed in the value of human excreta to agriculture and those who did not. The believers argued in favor of "sewage farming," the practice of irrigating neighboring farms with municipal sewage. The second group, arguing that "running water purifies itself" (the more current slogan among sanitary engineers: "the solution to pollution is dilution"), argued for piping sewage into lakes, rivers, and oceans. In the United States, the engineers who argued for direct disposal into water had, by the turn of the 19th century, won this debate. By 1909, untold miles of rivers had been turned functionally into open sewers, and 25,000 miles of sewer pipes had been laid to take the sewage to those rivers."

We have been living with the consequences of these decisions ever since. The Bullitt Center was a brave attempt at fixing this, at demonstrating that we don't have to just flush and forget, that we don't have to inflict our waste on someone downstream or pour valuable resources down the toilet. We have to keep trying this, and their experience will help others get it right.

But at some point, the users of these systems are going to have to take a bit of personal responsibility for these problems and clean up after themselves. This is the future, and we are all going to have to get used to it.