Avengers: Endgame paid off one major fan theory, which is that time travel would be necessary to defeat Thanos. With there being a number of films that have explored time travel in a variety of ways, one scene in the film used multiple references to such movies in hopes of making the concept clearer to both the characters and the audience. One of the films referenced was Hot Tub Time Machine, which is a film Sebastian Stan starred in back in 2010, presenting a paradox as it confirmed that an actor named "Sebastian Stan" existed in the Marvel Cinematic Universe while the Winter Soldier looked exactly like said actor. During a recent convention appearance, Stan weighed in on what would happen if the two identities collided.

"An interesting predicament. It would probably be, like, his worst nightmare or something, I don't know," Stan replied when asked about his two identities meeting at a Jus In Bello convention. "I remember I was watching the movie and they made that reference and I kinda looked around excitedly, but no one cared. I was the only one that really cared."

He added, "I had a blast filming that movie and I always love when I hear it still getting referenced." 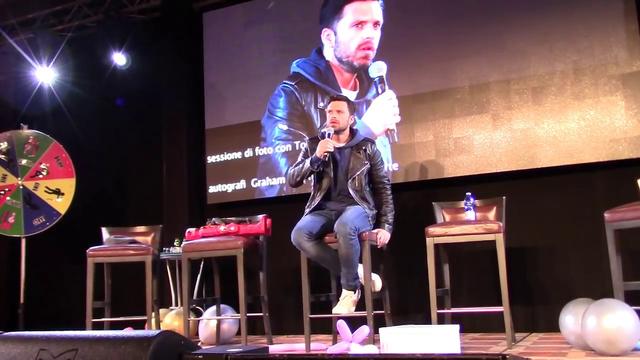 Stan played the character Blaine in Hot Tub Time Machine, though with it being much earlier in his career, not all MCU fans remember the role. This isn't the only paradox fans have noticed about the franchise, with fans also pointing out the existence of Star Wars in the MCU complicating matters.

Both in Captain America: Civil War and Spider-Man: Homecoming, Spider-Man makes direct references to the galaxy far, far away. Peter Parker's adolescent knowledge of pop culture makes this fit in line with the character, yet, by confirming that Star Wars exists, it confirms that the Star Wars prequels exist, in which Samuel L. Jackson starred as Mace Windu. In that regard, fans began to wonder what Peter Parker's reaction would be to meeting Nick Fury, who would look nearly identical to Mace Windu.

The Star Wars and MCU paradoxes don't end there, as Natalie Portman, Jon Favreau, Paul Bettany, Donald Glover, Forest Whitaker, Ben Mendelsohn, and many more have appeared in both franchises. While these many paradoxes are fun to point out, fans don't get too bent out of shape about how these paradoxes impact the films themselves.

Avengers: Endgame is in theaters now.

What do you think of Stan's remarks? Let us know in the comments below!