From Bexar to Huebner: Why non-natives struggle to pronounce Texas names

“We have a lot of different influences because we have a mess of different cultures and languages here,” says Dr. Christine Carmichael, an associate professor in the Communication Disorders program at Our Lady of the Lake University.

Dr. Rocio Norman, an assistant professor in the Communication Sciences and Disorders department at the University of Texas Health Science Center San Antonio, agrees. She says the proper pronunciation of words like Boerne, Gruene, and Huebner is a result of Texas’ culture, one that is impacted by both colonizers and settlers. From Spain and Mexico to Germany and the indigenous populations in the area, the influence of previous generations is still apparent today. Take a look at a map or drive around and you’ll see: Boerne, Gruene, and Huebner, all of which Norman says follow the rules of the language it is influenced by: German.

When considering the mix of cultures still part of Texas’ daily life today, Norman says there is a mismatch between how many words are written and how they are pronounced, causing a problem for non-locals.

If a transplant sees “Huebner” on a sign, they’ll likely stress the “hue” instead of pronouncing it as “He-bner.” For locals, this pronunciation is passed down orally, meaning we skip the awkward correction.

Norman points out that German-based words are more difficult given that they don’t sound the way they look, unlike Spanish, which is a more phonetic language.

“In German, it’s always the second vowel that gets pronounced and not the first,” Norman says, meaning that the “u” in Huebner and the “o” in Boerne are silent.

Still, we can’t always depend on phonetics to teach us how to say certain words, especially in a place as diverse as Texas.

“We learn the pronunciation of words phonetically, but when you have cultural influences in different languages, sometimes the phonetic rule doesn’t apply,” Carmichael says. 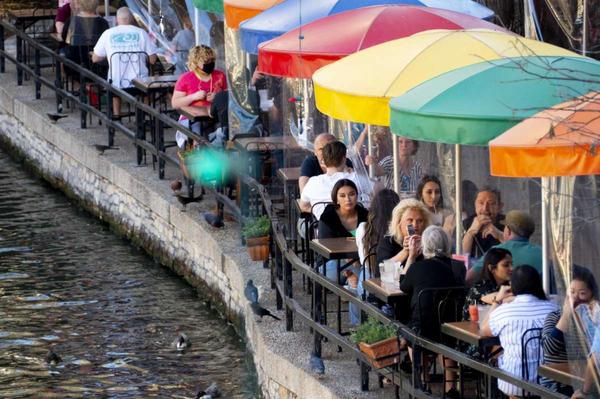 Dr. Stefanie Becerril, also a professor at Our Lady of the Lake University, says language and culture are interconnected, especially in a melting pot like San Antonio, so she encourages Texas residents to be mindful of the backgrounds that influenced the formation and culture of the Lone Star State.

“It shows a lot of respect and interest in the culture and the language that those words came from,” Becerril says. “That’s always a great place to start.”

Norman, who moved to San Antonio in 2008, says the context of where you are really matters, noting that saying “Guadalupe” with a Spanish accent rather than “Gwad-uh-loop” in Austin might get you some strange looks.

“You really have to follow the rules of the locals,” Norman says. “They’re the majority.”

“You have to listen to the natives and how they’re pronouncing everything and go with that,” she says.

- 'Ahhhh': An analysis of and love letter to the San Antonio laugh

- From Bexar to Huebner: Why non-natives struggle to pronounce Texas names

Stay up to date on the latest stories from San Antonio and beyond by signing up for our newsletters here.