A dip in a hotel hot tub is supposed to be a relaxing experience, but an Indiana mother found that bacterial guests floating in the water can prove dangerous.

Use of a hotel hot tub in March left Taylor Bryant with a bacteria-borne infection that nearly cost her her leg. The contraction occurred in Tennessee while she was on a trip with her husband and two children, she told USA TODAY.

Bryant used the hot tub several nights in a row on the trip, she told RTV6-TV. Bryant said she began to feel sick Wednesday, three days after arriving.

"My ankle was starting to swell and the pain was getting worse," said Bryant, who visited a doctor's office on Thursday.

Doctors told her she likely had been infected by bacteria while submerged in the hotel hot tub. A germ called Pseudomonas aeruginosa grows in hot tubs that are not properly taken care of.

It leaves a bumpy red rash with itchy spots, and pus-filled blisters around follicles known as 'hot tub rash' according to the Centers for Disease Control.

When Bryant's family left Tennessee that Friday, the nasty rash had started to grow on her ankle. It eventually swelled so much that she needed a wheelchair, she said.

Doctors started Bryant on oral antibiotics and aspirin and sent her home to Indianapolis, but her leg did not improve. Eventually, after more antibiotics, Bryant was referred to a wound specialist.

The wound specialist called an infectious disease specialist to her room. Bryant felt scared, she said. 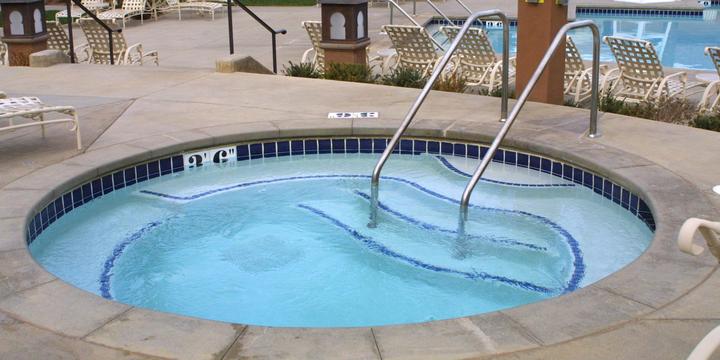 "You're literally thinking at that point that it's possible you're going to lose your leg. I was a bawling mess in the room," Bryant said to RTV6-TV. "I was like, I could be without a leg at 26."

She was admitted to the hospital for four days. An IV of antibiotics helped the infection subside. She continued the IV at home.

"I did that for two weeks, and I could tell a difference as my skin was dying," she said.

Her skin turned black. New skin grew. She was able to stand again.

Half of Americans:Have used swimming pools as an alternative to showering

But the infection process still isn't over: Bryant returned to work July 15 and continues to heal.

"I am lucky to still have my leg, but more lucky that I am still here today," she said.

Bryant did speak to the hotel about what happened, she told USA TODAY.

The business refunded her for two nights at first, then the whole week. The hotel never asked for proof or pictures, she said.

"I feel like they know they're at fault so didn't ask," she said.

Brian Katzowitz, health communication specialist at the CDC, told USA TODAY that the organization doesn't have data on how common hot tub rash is, or the frequency of severe outcomes.