Carolina Begglo looked like a sleeping princess as she lay on her back, her long, dark hair billowing around her while 10 inches of water cradled her body and 1,000 pounds of Epsom salts kept her from sinking.

Begglo, 31, is a new convert to an old form of rest and pain relief that has arrived in Orlando: the flotation tank.

"Everything happens so fast: your life, your work, constant stress," said Begglo, a College Park massage therapist. "It's always nice to find someplace to relax."

That's what Laurie Samulonis Bowers and her husband, Mark Bowers, thought when they opened East Coast Floats in Baldwin Park in August. Since then, more than 800 people have climbed into one of their three sleek, white pods that look as if they belong in a sci-fi movie.

Begglo, whose hands and back get tired from work, said the water, darkness and silence ease her discomfort and soothe her mind. The sensation is similar to dreaming, she said.

"It's very calm. It's very quiet. It's just you and yourself," Begglo said, adding it "totally relaxes you till the point that you forget even your name."

Proponents say the focus and freedom from distractions they get in a flotation tank — sometimes known as a sensory-deprivation tank — are conduits to spiritual enlightenment, anxiety relief, improved creativity and physical restoration. Some tout the tank as a remedy for conditions including fibromyalgia, arthritis, whiplash, jet lag, migraines, insomnia, premenstrual tension, back discomfort and depression.

Claims of miracle cures haven't been proved, said Tom Fine, who studied flotation for 20 years and is on the board of the Flotation Tank Association. But research and anecdotal evidence have shown that floating can relieve pain and tension.

"It's an easy way for people to experience a very deep relaxation experience that then they can transfer and continue to experience with a technique like meditation," said Fine, a mental-health counselor and associate professor in the psychiatry department at the University of Toledo College of Medicine.

The process works like this: A client enters a soundproof private room, disrobes, showers and lies supine in 150 gallons of skin-temperature water. Earplugs and inflatable neck collars are available but not mandatory. 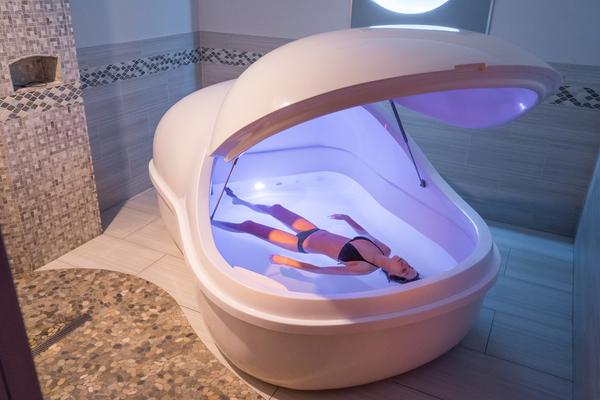 At East Coast Floats, a 90-minute session costs $45 to $75 starts and ends with music. Clients can control a dim, colored light with a button inside the unit, and they can open the clamshell-like lid anytime.

Customers at the center — one of two float businesses in Central Florida, including Total Zen Float in Casselberry — range from athletes to businesspeople and professionals suffering from stress, insomnia or pain, Mark Bowers said.

Bowers, 51, and his wife said they sank their life savings into the venture. Laurie Bowers, 47, was a jet mechanic in the Air Force, a middle-school teacher and the owner of a restaurant and catering business before launching East Coast Floats.

Mark Bowers, a software-company vice president, became interested in floating about three decades ago and decided to look into it as a business a couple of years ago.

Laurie Bowers traveled across the country to try out float tanks before deciding on a $22,500 Float Pod model made by Royal Spa.

The water is filtered four ways, and a lab recommended by the Florida Department of Health tests it weekly, Laurie Bowers said. The health department regulates the center, sets standards for disinfection and filtration and will conduct biannual inspections, spokesman Dain Weister said.

Neuroscientist John C. Lilly developed the isolation tank in 1954 while working at the National Institute of Mental Health. He wanted to see what would happen to the mind when it was deprived of as much stimulation as possible.

"Now when they first invented these tanks, they thought without sensory input your brain would go to sleep," Mark Bowers said. "What they found is it's quite the opposite. Your brain just expands.''

Floating gained popularity in the early 1980s, when the NFL's Dallas Cowboys and Philadelphia Eagles bought tanks for their players. The 1980 science-fiction movie "Altered States" brought the practice to the public consciousness.

Its appeal waned but has undergone a resurgence in the past few years, with spas now in Canada, Europe, Australia and more than two dozen U.S. states. Comedian Joe Rogan is an outspoken proponent. A brain-research laboratory in Oklahoma also is studying whether the tanks could be used to treat conditions such as anxiety, addiction and anorexia.

"I think it's overall a great experience, and people can really benefit from flotation," said Paul Morgan, a University of Pittsburgh researcher who determined that floating alleviates muscle pain after exercise. "It helps not only with mental and emotional state of mind, but potentially with the physical aspect as well."