*Major spoilers for season 1 of Outer Banks below!*

Since the series launched on Netflix this earlier month, Outer Banks has been taking the world by storm. Fans have fallen in love with the show’s cast of crazy characters and the epic treasure hunt that has ensued. However, those aren’t the only reasons viewers are hooked. The show’s island setting might seem like the perfect getaway—especially now—but thanks to a class war raging between the Pouges and the Kooks, life in the Outer Banks is full of surprises.

There’s no one in the series more quintessentially Pogue than the character of JJ, played by Rudy Pankow. While most of the Pogues experience hangups and struggles, JJ’s storyline is like no other. Coming from a low-income household and an abusive family life, JJ can’t seem to help but getting stuck between a rock and a hard place, no matter how hard he tries. JJ’s only opportunity to escape his circumstances is to find the treasure, but as fans saw, things didn’t go as he hoped.

In an exclusive interview with Seventeen, Rudy Pankow opens up about JJ’s future, that heartbreaking hot tub scene, and while things won’t be so easy for the Pogues if the show returns for a second season.

17: The show has been out for quite a while now, and fans seem to be absolutely loving it. How has it been seeing their reactions?

Rudy Pankow: The truth is, is that you don't really get the full dose of how big [the show] really is because you're all quarantined, and the only thing you can see, basically, is social media numbers. Then, here and there, a phone call from Jonas [Pate], the show creator, or your agent or manager, being like, "It's blowing up!" We don't really see how big it's getting, but it's so amazing to see on social media how it's being taken, and I'm excited to see if this means season two. 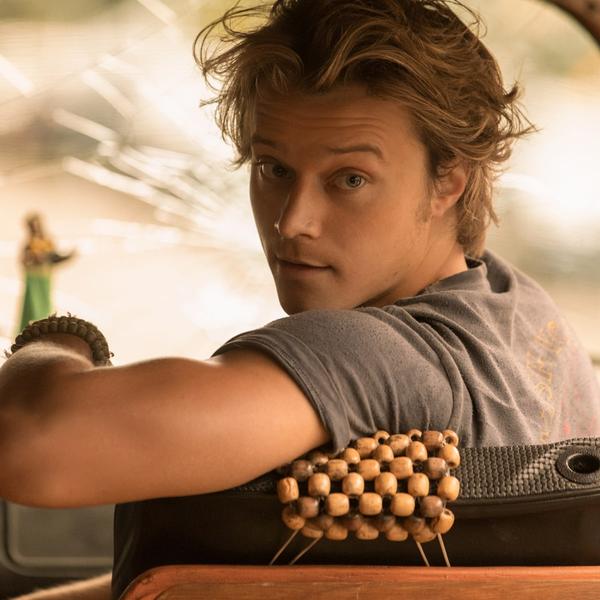 17: JJ's biggest scene is in episode 7 when he has the breakdown in the hot tub. How did you approach that as an actor?

RP: Valerie Weiss was the director for that episode, and I remember talking, specifically, about how I want to do it. "This is my vision, what's yours?" And she really wanted me just to go and just to let it all out with the text and dialogue, and if something comes naturally, just to do it. I remember there's definitely some stuff that wasn't put in there, but there's a lot of improv stuff near the end there about my dad. By the end I realized that I need to go to where all of this heartbreak and pain is coming from, and there's some of that written, but I wanted to add a little bit of it in there myself.

There's a little bit of it in there that I improved, and I was really moved and touched when they kept it in, thanks to the editors and the writers. Getting into that headspace is always challenging—especially when you can't use your own parents—because I was lucky enough to have a father that didn't beat me, that didn't abuse me as a child. Every child is disciplined, but not to the extent that JJ was. It was really hard to use my own family and my own dad as somebody to trigger me to get to that place.

17: Have you been getting a lot of fan reactions over that scene? Especially since many teens are also facing the stuff that JJ went through.

RP: I think this is why that scene's so beautiful—everybody feels a little bit of abandonment in their life. I think everybody, to a certain extent, can relate with that. I have yet to find a story [of someone who related to that scene] and I would be touched and moved if I had impacted somebody that had that happen to them.I will definitely take it very seriously to heart.

I posted a photo of me in the hot tub a couple of days ago, and people were like, "One of my favorite scenes, it's so good." I was really appreciative of it. I think the scary part is that it's real. There's a lot of people out there that are abused by their parents, and I need to take it very seriously. I just don't want to make it feel like it isn't real.

17: Throughout the season, we see that JJ's father is an alcoholic. In the hot tub scene, JJ is also uses alcohol as a way to avoid the feelings that he has. Do you think that might affect him in season two?

RP: I think it sets up a great arc for Pope to set him straight. How we all act today is based on how we saw our parents interact with each other, and I think it could possibly be an issue for JJ to not use substances. Pope or Kie, [could be] his escape from that pain, which would be really beautiful.

17: The final scene when the parents comfort the Pogues was heartbreaking since JJ didn't have anyone there. Pope's father, who looked down on JJ the entire season, embraces JJ and sort of brings him into his family. Do you think that might be possible for season two?

RP: Yeah, I do think so. I'm hoping because I loved working with Hayward and he's an amazing actor. We loved playing that scene and really embracing each other in that scene. It was really amazing because I just felt so accepted. For season two, it would be amazing and funny to see Pope and JJ rooming together, or something. I think that'd be hilarious because it'd be opposites living amongst each other. I think there's a lot of comedy that could play into that, but I don't know yet.

17: How do you think JJ's relationship with his father is going to play out in the future?

RP: I think they will have to resolve something. Not that his father is going to accept him, but in that last scene in episode 10, there is a glimmer of hope that maybe Luke isn't all bad. There's that little question: Can this man love his child like a normal parent should? [The question] is very briefly there in the 10th episode, even though he's screwed up on Ambien.

17: The Pogues will also have to deal with the presumed loss of John B. and Sarah. What do you think will happen to them?

RP: I was always drawn to JJ's arc. He takes on a little bit more of a Pope role by the end of season one. He's kind of like, "Yo, guys, let's come together." I was really happy to see that he really grows up in season one, and I love that arc. For season two, I think it goes back to how season one started, with JJ being all rogue and screwed up because he thinks his best friend is dead. Justice is going to be served, I think, but it's just a matter of who does it.

I think I really want to see [JJ] struggle with coming to terms with the fact that his best friend is gone, and "what's the point in trying any more?" I think that's something that I want to see. And if that doesn't happen, that's okay, but I think that would be a great arc for JJ and the Pogues to fall apart until we know John B. is back.

17: It was nice to see that the show didn't take the easy route when it came to an ending—especially since finding the gold didn't get them the happy ending they expected. What did you think about the finale?

RP: There was some debate about what the ending was going to be. Was it going to be happy? Was it going to be sad? We found the tone of the show while shooting it, and we were like, "Nah, this is a sad ending." And I think it's a great cliffhanger because [that's what] OBX does—it gives off the YA drama-filled storylines, and it feels like it's still TV. Then, all of a sudden, you get hit in the face with something really real, like a tragedy, that it really hits hard, and that's this show.

17: What has been the biggest lesson you've learned playing JJ?

RP: JJ is so self-sufficient, and I think I am as well. Paying attention to others and how you affect them is something that I learned as JJ. It was like, "Oh, you can't just always be doing your own thing or else you hurt people when you only do your own thing." But then, there's a certain balance to it because if you only are out there seeing how you're affecting others, you're really not focused on how you affect yourself. JJ taught me how to balance both worlds of not only acting as JJ, but also balancing work and not work. If it's cherishing your family time or being in a relationship at some point, there's a balance to everything.

Tamara Fuentes is the current Associate Entertainment Editor at Cosmopolitan, where she covers TV, movies, books, celebrities, and more. She can often be found in front of a screen fangirling about something new. Before joining Cosmopolitan, she was the entertainment editor over at Seventeen. She is also a member of the Television Critics Association and the Latino Entertainment Journalists Association. Follow her on Twitter and Instagram.