DENVER — Denver7’s Discover Colorado | Through Your Photos Facebook page is an outlet for tens of thousands of people to enjoy the beauty of Colorado.

Anyone familiar with the page has likely seen the photos Scott Wilson has captured.

Some of his most captivating shots are of the wild horses in Colorado’s Sand Wash Basin. One that he says people have connected most with, titled “Anger Management,” recently took the top nature prize out of 170,000 entries in the 2022 World Photography Awards.

“These are really, really hearty animals that can kind of cope with all these tough environments thrown at them. And this is the middle of summer — it's 100 degrees. There's a growing crowd around the waterhole, and he's pounding the ground and kicking up a dust storm sort of demanding his place at the front of the line just letting other stallions know what he’s about,” Wilson said.

The stark contrast of the light-colored dust against the stallion's dark coat sparked what Wilson called the "unusual choice" to make the photo black and white. He wanted to highlight the tension not just in the moment, but what was to come after that moment in time.

"This was July 2021, so just not long before the roundups actually, when about two thirds of the horses that are in that basin were removed, making way for livestock, really, which is one of the tragedies facing American mustangs today," Wilson said. "I really wanted to capture some of that energy." 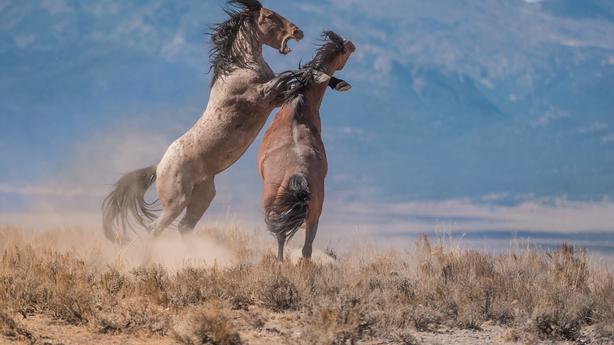 Wilson and other wild horse advocates took issue particularly with the use of helicopters to round up the horses, previously calling the practice "appalling."

A total of 684 wild horses were gathered in the roundup, and 49 were released back to the Sand Wash Basin.

As an advocate for the wild horses, Wilson hopes the recognition for "Anger Management" will lead to greater public awareness around wild mustangs.

RELATED:'He was like the Holy Grail': The life and legend of America's most famous wild horse

While the award is a huge honor, what’s extra special is that after 20 years as a landscape photographer, his passion for photographing wildlife was born out of his journey with stage four colon cancer.

“Wildlife photography became my escape, my therapy. Kind of, really, channeled my mindset to tackle this disease. And it was through that experience I discovered the wild mustangs in northwest Colorado,” said Wilson, who publishes his work as WilsonAxpe Photography.

Wilson learned of his cancer diagnosis in 2016. He only had a 10% survival rate, but he could take on a 40-week chemotherapy treatment that involved aggressive chemotherapy that caused skin irritation when exposed to sunlight. He began shooting the wildlife from the protective shade of his car.

Now, Wilson is in remission and free to roam the Sand Wash Basin, just like the stallion he captured in the award-winning photo.

"He's still out there," Wilson said. "That adds an extra sparkle for me. And for those that know the horses... to know that he's still wild and free and out there is absolutely fantastic."