Lake Powell surface level dropped below the critical 3,525-foot mark sometime on the Ides of March. You’ve probably already read that somewhere, since the national media can’t seem to get enough of the slow motion desiccation of one of the nation’s largest reservoirs. And what’s so critical about 3,525 feet? 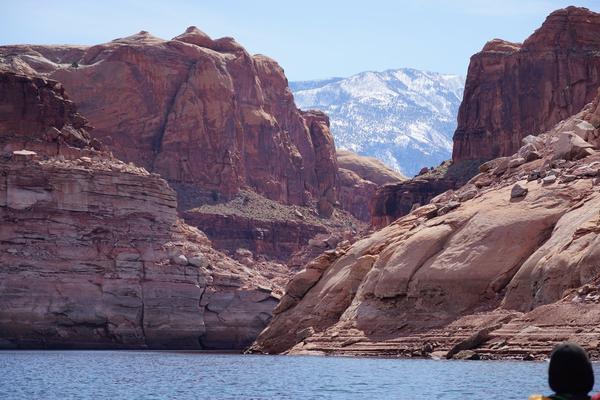 The real critical number is 3,490 feet, otherwise known as the “minimum power pool.” When Lake Powell sinks below that elevation, Glen Canyon Dam can no longer produce hydropower. That’s a big deal because Lake Powell really only serves two purposes these days: recreation and hydropower generation (the water storage component becomes somewhat irrelevant when Lake Mead is as low as it is now). Not only are the dam’s turbines a significant source of power for the Western Grid, but they also provide resilience for the grid in a way that other generators cannot.

Lake Powell has officially dipped just below 3,525 feet in elevation, reflecting the Colorado River Basin’s dry winter season. The elevation is expected to climb back above 3,525 feet over the course of spring runoff.More info: https://t.co/IobOBURhqH #drought #coloradoriver

Water managers had hoped to keep the level at least 35 feet above minimum power pool, i.e. above 3,525 feet, so they’d have a bit of a buffer to work with. Now the level is inside the buffer zone, which is reason for concern but not immediate alarm. While the rate of decline has prompted officials to issue a more pessimistic outlook for the reservoir, they don’t expect a loss of hydropower anytime soon. Snowpack levels in the watersheds that feed Lake Powell are slightly below average for this time of year, but are tracking about 7 percent ahead of last year’s levels. Spring runoff will soon begin, inflows will increase, and the lake should begin rising again, staving off the turbine shutdown—for now.

Let’s get to the data: