Greek authorities have said dozens of refugees are believed dead after a boat carrying as many as 50 people, according to one witness, sank off the island of Folegandros, in the second major loss of life in the Mediterranean within days.

Almost 24 hours after the rescue operation was launched late on Tuesday, coastguard officials said it was unlikely survivors would be found.

“Efforts will continue but in waters that are very cold and very deep the chances of finding anyone [alive] are decreasing by the hour,” said Nikos Kokkalas, the Hellenic coastguard’s spokesperson. “Our fear is that most simply didn’t manage to get off the boat and would have sunk with it to the bottom of the ocean.”

By late on Wednesday rescuers had found the body of only one man, he said.

The incident comes less than five days after UN migration officials said 164 people had drowned off the coast of Libya, now the dominant transit point for people fleeing war and poverty in Africa and the Middle East.

Attempted crossings from the anarchic oil-rich country have surged in recent months amid an unprecedented crackdown on refugees in Tripoli, its capital.

In two separate shipwrecks on Friday and Saturday rescuers retrieved the corpses of those who had drowned when wooden boats heading from Libya to Italy capsized in rough seas. The loss of life brought the death toll of those using the central Mediterranean route to about 1,500 since the start of the year, according to the International Organization for Migration. 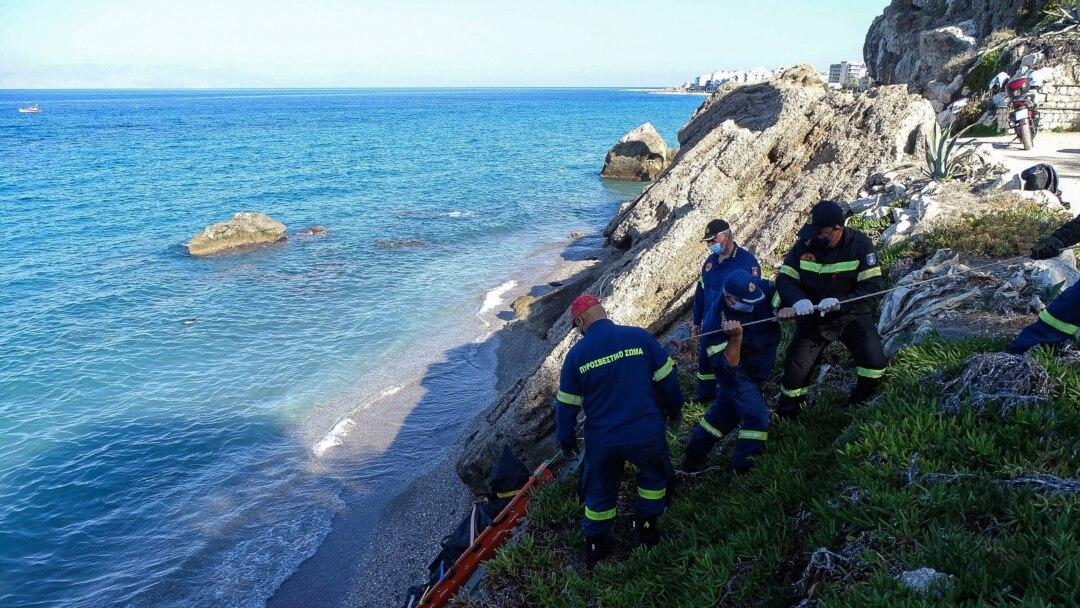 A growing number of migrant boats are also heading to Italy, via Greek territorial waters from Turkey, with almost 12,000 sailings recorded this year.

“What we are seeing with ever greater intensity is that people are attempting such journeys in all seasons,” said Kokkalas. “It’s no longer a seasonal phenomenon that happens only in the spring and summer.”

Greece’s shipping ministry said a naval frigate, four coastguard vessels, three Super Puma helicopters, a C-130 military transport plane, three passing ships and three private craft had participated in Wednesday’s search and rescue operation. All were seconded after the boat sank at about 8pm on Tuesday. Hellenic air force helicopters were expected to continue scouring the area throughout the night.

Earlier, authorities found 12 people who had managed to escape in an inflatable dinghy that had been tethered to the ill-fated vessel. The survivors, who included a woman and four adolescents, were predominantly from Iraq although three Syrians and two Egyptians were also among them, according to officials. One survivor told the Greek coastguard that the boat had begun taking in water after running into engine trouble and that as many as 50 people could have been onboard.

Giorgos Skordilis, a shipping ministry official, said witnesses described the boat sinking within minutes. “It was obviously totally unseaworthy and began to sink quickly,” he said. “From what we understand it was packed solid with people.”

Although arrivals have dropped dramatically with the militarisation of its land and sea frontier – and, say rights groups, persistent “pushbacks” of boats carrying asylum seekers – Greece remains an initial destination for many attempting to enter the EU.

On a regional tour earlier this month, Pope Francis described the Mediterranean as a “cemetery without tombstones” and castigated Europe for hardening its border policies with the sole aim of keeping asylum seekers out.

“These [shipwrecks] are a strong reminder that people continue to risk their lives taking desperate journeys in search of safety,” said Stella Nanou, the Athens spokesperson for the United Nations refugee agency. “They underscore the need for more regular pathways to be created. If there were legal and safe routes, those seeking refuge would have a choice.”

Currently, she said, people were faced with “the impossible dilemma” of having to decide whether to risk their lives by remaining in their home countries or embark on dangerous voyages with “the small chance” of making it to Europe.

NGOs have increasingly voiced alarm at the intensity of the deterrence policies adopted at the EU external borders. In recent months Greece has erected a 25 mile-long (40km) steel wall along the land frontier it shares with Turkey and deployed sound cannon capable of firing bursts of deafening noise as part of a concerted EU strategy to deter migrants.