(WXYZ) — Michigan U. S. Senator Debbie Stabenow announced a total of $10 million in federal infrastructure projects to make major improvements in water systems. The full list is below.

One project is getting scrutiny as only a band-aid approach, slowing sewage discharges into Lake St. Clair that has been a problem for decades.

The picture of the discharges says it all. I don’t think I need to tell you what that is. 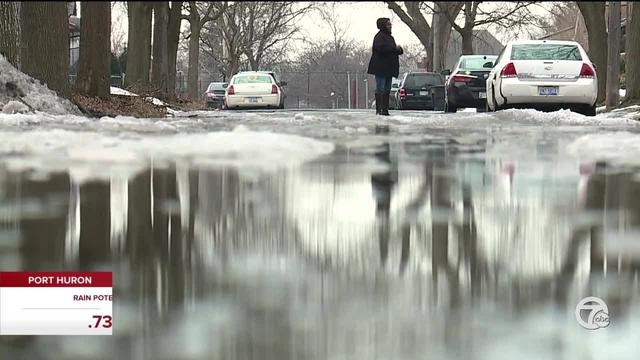 The Senator announced $4 ½ million to expand the water retention system at the Chapaton Pump Station in St. Clair Shores to hold sewage overflows. That entire project is $17 million. “This one will receive four and a half million dollars to really jumpstart exactly what needs to happen,” the Senator announced during a news conference.

In several areas of Macomb, Oakland, and Wayne Counties, underground sewers are combined storm and sanitary systems. During heavy rain or snow melt, the overflows are held to be sent to Detroit for full sewage treatment, or they get minimal or no treatment and are discharged into the lake.

Macomb County Public Works Commissioner Candice Miller says no one has determined how much it would cost to fix all of it, but it would be billions.

Mike Gutow heads up the group Save Lake St. Clair and says this is a band-aid approach but it is better than nothing. He also says Commissioner Miller is doing the best she can with what she has. Gutow says the fix is what Port Huron has done, upgraded the system to eliminate the combined sewer system.

When confronted about this being a band-aid, Senator Stabenow said during the news conference, “If you say we should do nothing until we can do all of it at the same tie, then we’re going to have more pictures like that.”

Here’s her entire list of projects getting federal funds: