How a San Francisco remodel turned into an epic nightmare involving city red tape, squatters and cops shrugging off crime

It involves insanely high real estate prices. Byzantine planning codes that even the city’s planners find confusing. Neighbors who demand a say in any change near them. Squatters, drugs and vandalism. Police officers who blame the district attorney as they let criminals go. A pricey private security guard. And heaps of frustration.

“This is a whole other level of crazy,” Calhoun said.

It all began in October 2020 when Jennifer Sun and her husband, Ben, purchased a house in Bernal Heights for $1.75 million. In most parts of the country, that would buy a stunning mansion. In San Francisco, it buys a rather dated fixer-upper.

The couple are wealthy, and nobody but them will shed any tears over their home remodel gone awry. Still, what happened next points to what’s broken in San Francisco — and so much is broken.

The couple hired Calhoun to design a remodel, submitted their plans in March 2021 and hoped to secure permits within six months. They kept paying rent on their South of Market apartment so they could live there during the remodel, while also paying their new mortgage.

But six months turned into 12 months — and still, no permits.

The first hiccup was that the Planning Department said the home had been illegally converted into three units by a previous owner, and the couple wanted to restore it to its original single-family home set-up.

After some back-and-forth, the Planning Department said the plan was allowable because there was no record of any tenants ever living there.

Dan Sider, chief of staff for the Planning Department, said planners were ready to approve the plans including major interior work in July 2021, but then the couple submitted a proposal with a new wrinkle: extending the back of their home by just under 3 feet. That would make the back of the house even since the third story juts out beyond the lower two.

But this being San Francisco, and especially Bernal Heights, that seemingly small change is a very big deal. That’s because of a “special use district” approved by the Board of Supervisors in 1991 that governs every little change to homes in the neighborhood. The idea was to preserve the area’s character, but the details will make your eyes glaze over and, according to Calhoun, have prompted many architects in the city to refuse to work there.

In sections and subsections to subsections, it governs changes to homes in minute detail — down to the allowable width of curb cuts and garage doors.

“I can assure you that it is not a page-turner,” Sider said good-naturedly.

A group of neighbors called the Bernal Heights East Slope Design Review Board — with no apparent website or easy way to find them — gets to weigh in on projects in the area. An email sent to an address associated with the group was not returned.

The rules include the length a home can extend into the backyard from the front of its property line. But because the couple’s house sits on a curved lot, Calhoun’s been trying to get an answer on where on the front lot to start measuring from. She said she waited until November just to get a planner assigned and has spoken to four different planners about the 3-foot extension, and that none knows the answer.

“They shared that the code is confusing even for them,” she said. 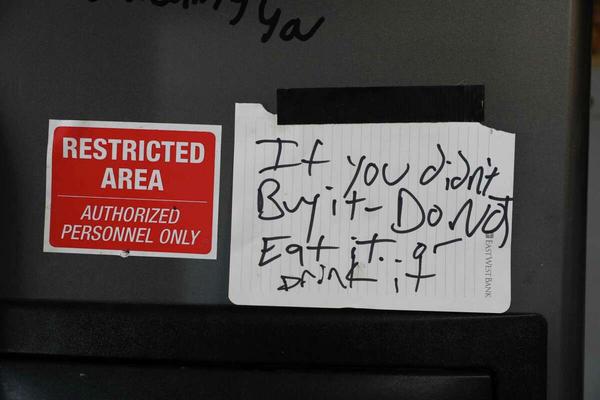 Then, the planner told Calhoun the home was historic and the facade — though nondescript — could not be altered. Sorting that out would have extended the project by another six to nine months, Calhoun said, so the couple dropped proposed changes to the front.

Then things got really weird.

In February, Calhoun received an email from a member of the Bernal Heights East Slope Design Review Board who reported a neighbor across the street from the couple’s home had grown “increasingly agitated” by the couple’s lifestyle and the cars coming and going from the home at all hours.

Sun said she was shocked. They weren’t living there. What cars? What lifestyle?

So they visited the property, which had weird spray paint across the garage door and signs of people inside. They called police, who accompanied them inside the house where they found squatters had taken it over.

Photos the couple took show piles of furniture, clothes and a fridge full of food. Graffiti covers the refrigerator and walls. One message can’t be relayed in full because of antigay language, but it reads in part, “No soliciting. No shopping. No snitches.” They bashed holes in the walls and ceilings, wrecked a sink and other fixtures, left dog poop on the carpets and discarded needles and syringe caps around the house. Flies were everywhere. The house still smells bad.

According to the couple, police officers gave the squatters — all of whom appeared high — 10 minutes to collect their belongings and leave. They arrested only one. No one else faced any consequences. The couple said police explained there was nothing they could do because District Attorney Chesa Boudin “has different priorities right now” and wouldn’t prosecute.

Salar Naderi, a spokesperson with the Police Department, confirmed police found seven people occupying the house and arrested Richard Ostergard, 47, who had warrants for stealing a vehicle, possession of stolen property and theft. Naderi said the homeowners “did not want to have any of the (other) subjects cited or arrested,” disputing the couple’s version.

In any case, Sun, 36, said that just a few hours later, neighbors texted and called to tell her the squatters were back. And it doesn’t sound like they’re merely people down on their luck. Photos show nice belongings, and neighbors reported them driving a Mercedes, BMW and Dodge Durango.

Neighbors continued to report to the couple that people were entering the home over the next couple of days, and that someone tried to access the property with a crowbar.

The couple quickly hired a private security guard whom they’re paying $8,000 a month to watch over the house every night.

“If we had known the city would take so long, we would have moved in and this wouldn’t be an issue,” Sun said.

Even though they’re doing well professionally, the couple said the costs have created “an immense financial impact” — and work hasn’t even started yet. Mortgage payments and property taxes on the house have topped $180,000 so far. They paid $3,000 to haul away the squatters’ belongings and don’t know yet how much it will cost to repair their damage.

Meanwhile, construction costs keep growing because of inflation and supply chain shortages, and there’s no telling how much the remodel will end up costing or when they can finally start.

“How does anyone afford this?” Sun asked.

Sun said she’s no longer excited about moving in after the remodel — which she thinks won’t be done for another year at best.

“It totally creeps me out,” she said. “Just unlocking the door, I get goosebumps. It’s uncomfortable being in here. It’s so unnerving. This is supposed to be home.”

This being San Francisco, there is one bit of good news for the couple. Redfin says their dream home turned nightmare is now worth more than $2 million.