When Hurricane Ida hit New York on Wednesday, September 1, Madison Weber was up all night watching Instagram videos of the city’s inundated streets. Many of them were shot in Bushwick, where she lives and works as a teacher at the Achievement First middle school. Early the next morning, she took a walk down Knickerbocker Avenue to survey the aftermath. The water had drained by then, but what it had loosened was still everywhere. “There was just this explosion of trash,” Weber says. She saw gutters clogged with soggy cardboard boxes, coffee cups, milk crates, and silt, and a snarl of candy wrappers, plastic bags, foam egg cartons — even an outdoor dining structure, its broken wood framing scattered — that had floated over the storm-drain grates and blocked them.

Weber shared a few photos of the street with members of the Bushwick Emergency Relief Fund, a mutual-aid organization founded in April 2020 by fellow Achievement First employees Keisha Regular and Gregory Tate-Villa. By 10 a.m. on Thursday, a group of volunteers had convened at the Knickerbocker M station with trash bags, shovels, and brooms. They made their way toward Maria Hernandez Park, seven blocks away, scooping up as much detritus as they could. Weber said she had done this before with another group, the Clean Bushwick Initiative, a community-advocacy organization founded in 2016. “We’re constantly getting trash out of those drains,” she says.

That stretch of Knickerbocker Avenue is one of the city’s riskiest areas for “deep and contiguous” stormwater flooding, meaning the water can get more than a foot deep during even short summer storms. Hurricane Ida dumped more water on the city than any of the infrastructure was really designed to handle, but during milder events, water still pools at intersections along the street. The infrastructure that is there to prevent flooding — like rain gardens recently installed by the Department of Environmental Protection to hold and filter stormwater — can’t fully do its job because of neglect and insufficient maintenance. “The rain gardens stay flooded,” Weber says. “They’re also filled with trash.” DEP field crews are supposed to come out and check the rain gardens a couple of times a week, and the agency runs a neighborhood stewardship program to help look after them. But in Bushwick, the problem got so bad that the agency and Clean Bushwick organized a cleanup that specifically focused on these rain gardens.

During moments of crisis, deferred and inadequate maintenance suddenly catches up with a city. These circumstances are cast in high relief when a single event — like Ida or Henri or a summer downpour — reveals just how fragile a system really is. As Shannon Mattern, an anthropologist who studies infrastructure, writes in an essay about taking care of what we build, maintenance is how we put the world back together. Everything requires upkeep, and that work is part of a system. “Maintenance at any particular site, or on any particular body or object, requires the maintenance of an entire ecology,” Mattern writes. “Attending to supply chains, instruments, protocols, social infrastructures, and environmental conditions.” Caring for our streets grows all the more urgent as the severity and unpredictability of storms increase.

The drain problem is neither isolated nor even new. When Eric Adams toured Brooklyn after the storm, he Tweeted a photo of a catch basin half covered with grass and debris. “It clearly shows we have not been cleaning them on a regular basis,” he said on MSNBC, stating a fact that he (and everyone else in New York) is well aware of. Five years ago, Adams even launched an Adopt-A-Catch-Basin program with the DEP, enlisting volunteers to keep drains clear in Canarsie, Gowanus, Prospect–Lefferts Gardens, and Sunset Park — all neighborhoods with high volumes of 311 calls about blocked storm drains. He has mentioned grants for local cleanups in his environmental proposals, too.

When Tropical Storm Elsa hit New York City in early July, video of flooding at the 157th Street subway station in Washington Heights went viral. The passageways looked like gray-brown swimming pools as riders waded away from the tracks. A later report from the MTA said that basic issues, like drains clogged with trash, had made the situation worse. The AntiLitterProject account posted another video, a before-and-after showing a couple of workers from the deli on the corner as they raced to unblock a drain before the rising water that had engulfed the entire intersection spilled into their storefront. During Ida, the same men stood guard outside, this time in the middle of the night, sweeping away floating trash bags and litter like hockey goalies. That night, floating trash was simply everywhere. 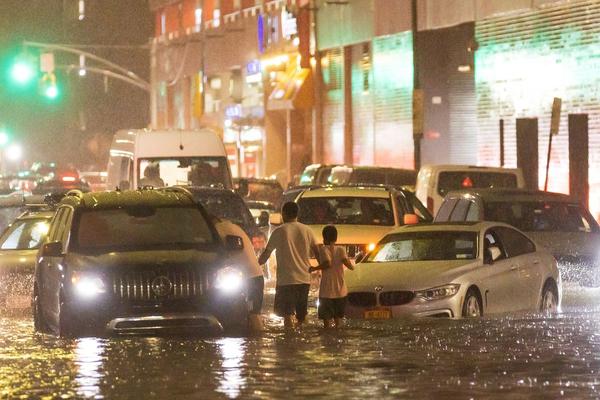 So how much did clogged storm drains have to do with all this? “Blocked drains are a chronic issue in our district as a result of trash blocking drains when there is flooding,” a spokesperson for Councilmember Antonio Reynoso told Curbed. “NYC’s sewer system is out of date; the system was not designed to accommodate the level of rainwater that we experienced during Hurricane Ida.” Modernization, at the broad, systemic level, is also related to maintaining the city as a whole: If the stormwater system isn’t rebuilt and expanded quickly enough or adapted to climate change, the ecology of New York is harmed. The projects the city does have underway, like a recently completed sewer expansion and blue belt in Staten Island, can’t come fast enough.

Ahead of Ida, which eventually triggered the first-ever flash-flood emergency in New York City, the city activated its Flash Flood Emergency Plan. (It did so before Hurricane Henri, too.) A number of agencies are responsible for various stormwater drains in the city, but the catch basins on street corners fall under the purview of the Department of Environmental Protection. Edward Timbers, a DEP spokesperson, told me the department’s teams had fanned out across the city to about 120 flood-prone locations in an 11th-hour dash to inspect and clear as many vulnerable drains as they could. He didn’t know exactly where the teams had gone, though, or whether they went to the area Weber cleaned up. He wasn’t able to say how much clogged drains and catch basins had contributed to the flooding during Ida specifically, but I did get some insight into how the agency conceives of maintenance related to storm drains: It’s spotty.

“One thing we try to emphasize is that every New Yorker can help prevent flooding in their neighborhood by checking that catch basin on the corner to ensure it’s not blocked by litter or debris,” Timbers told me. “There are about 153,000 catch basins that the DEP is responsible for, so the more eyes we have on them, the better. If it is [blocked], they can clean it off with a broom or report it to 311 and a DEP crew will be sent out. Crews regularly inspect them, but we can’t get to all of them before every storm.”

The city needs the help of good people, no doubt about it. But this stopgap is no substitute for a chronically underfunded and outdated system of dealing with trash in the city, especially in neighborhoods that have been historically excluded and underserved. We dodge trash bags left on the sidewalks for pickup. There aren’t enough garbage cans. And even if someone does hang on to an empty coffee cup for a few blocks until spotting a bin, it may be too full. The Department of Sanitation even runs an Adopt-A-Basket program.

A week before Ida, I got caught in an unexpected downpour near Myrtle Avenue and Knickerbocker. This was ordinary heavy rain, not a tropical storm or hurricane. (The National Weather Service had issued a flash-flood watch that afternoon warning of localized flooding in urban areas with poor drainage, but it wasn’t widely publicized.) Before the rain stopped, a couple of drain keepers (whom I assumed to be self-appointed) were already out with their brooms. As the expression goes, there’s no such thing as a natural disaster; what happens after bad weather hits is the result of social structures and hundreds of years of decisions that protect against vulnerability or fail to do so. Historically and culturally, the United States reacts to crises rather than acting ahead to prevent them. Maintenance takes time, requires faith in civic leadership, and costs money that state and local governments don’t have. Disasters trigger the release of billions of dollars of federal funds, helping economies grow. It’s a twisted cycle.

To better understand the ecology of waste management in the city, you have to start with how much trash is generated in the first place. We consume too much single-use stuff, which adds more pressure to the system. As the area has rapidly developed and gained new businesses over the past decade, services haven’t risen at the same rate. So when the city cut trash collection during the pandemic, it made an already bad problem worse. “It’s a domino effect,” says Nicole De Santis, who founded the Clean Bushwick Initiative six years ago. “If people were doing what they’re supposed to be doing, maybe the trash doesn’t flow into the drains and clog them. But no one is doing what they are supposed to be doing, and there is no accountability.” The drop in trash collection is compounded by a 50 percent reduction in street sweeping, which began during the pandemic suspension of alternate-side-of-the-street parking and still has not returned to its regular levels. “Even on days where alternate-side parking is suspended … we send our DSNY mechanical brooms out to help and ask residents who have [a catch basin] in front of their home to clean them if they are able to as well,” Joshua Goodman, a spokesperson for the Department of Sanitation, told the Daily News. “We have been hard at work balancing the need to clean the streets regularly with the need to keep New Yorkers from having to repeatedly move their cars during the pandemic.”

Bushwick was also one of the city’s redlined neighborhoods, and those areas experience higher levels of flooding, often because of a lack of drainage. “We have high asthma rates, high pollution, high poverty; we have low rates of health insurance; we have a large number of undocumented families — I don’t think this is disconnected,” De Santis says. “It’s all connected to environmental racism.” Flushing, Woodside, Elmhurst, and Jamaica — all facing similar issues — were also heavily affected by Ida. “Inevitably, Bushwick was one of the neighborhoods most impacted, and it wasn’t just because that’s where the storm hit,” Weber says.

As Weber and her fellow volunteers worked their way up the street, passersby stopped and lent a hand. Councilmember Reynoso heard about the cleanup and came by. He also bought cleanup supplies and made them available to folks who stopped by his office (though there were no takers). By early afternoon, the group had gathered enough litter to fill 30 trash bags. They piled them neatly on street corners for pickup and started planning a second round for the weekend. Eventually, Mayor de Blasio came through, around 12:30, when the volunteers had reached Maria Hernandez Park. “Apparently, he was scheduled to come by to survey the damage,” Weber says. “But when he got here, the street was cleaned up.”