Hotels are a hub for commerce, transportation and culture. Today, interior designers are redefining hospitality spaces to accommodate new forms of travel, communication and rest. From historic renovations to contemporary ground-up hotels, these projects center around leisure and memorable guest experiences. In turn, they express brand identity to rethink what interior design and hospitality will be in the future.

Hospitality designers create the interiors that connect guests and hosts, and for hotels, the programming is widely expanding. Hospitality design focuses on environments that entertain or host the public, and hotels are incorporating new approaches to materials, sourcing, furniture, color and more as they reimagine guest experiences. The following projects showcase a range of approaches from around the world, as well as diverse interiors reflective of local climates, cultures, and building traditions.

No right angles in sight here: the venerable house in Herzog-Friedrich-Straße, which dates from the 1460s, is a building in Innsbruck's historic streets whose architecture is inflected with architectural elements from a wide range of historical eras, having undergone constant transformation. Yet the distinct features of each period coalesce in timeless fashion to form a symbiosis of urbanism. In keeping with the rhythm of change over the centuries, the Hotel Weisses Kreuz fits into this pattern. 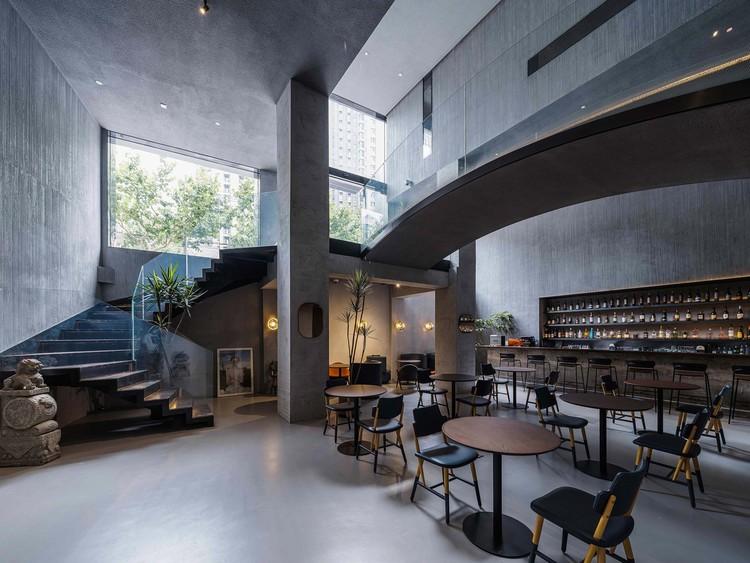 The developer of this rural resort has launched this complex in La Mancha as a hospitality space dedicated to oil. In this hotel, designed by the architect Sergio Peralta, Ideo Arquitectura has done some interior design works: lighting, new façade openings, doors, wash basins, designer beds, stairs, kitchen, etc. With regards to the finishings, the team proposed an olive green as the main color for the interiors project. All the construction elements such as floors, walls, concrete slabs, and many pieces of furniture utilize the color.

Located in the center of Hiroshima City, in a former hospital building that has been converted into a hotel. Including Hiroshima, many travelers come to see the beautiful Seto Inland Sea and islands. The team believed that to make the most of their journey, the most important thing is not to have extravagant amenities and facilities, but to have interaction with local people and find information about the 'real' Hiroshima.

The Volkshaus Basel, originally the castle bailiwick, can be traced back to the 14th century. The location has always been a site of dense and varied use—a piece of the city within the city. In 2011, the design team began rebuilding the Volkshaus in several stages, piece by piece, and have since reinstated lost uses such as accommodations and a shop. Their hope is that their modifications and the renewed diversity of uses will not only revitalize this extremely special location in Basel but also revive the architectural identity of the Volkshaus.

The site of the Emperor Hotel, Qianmen was once occupied by a public bath, and so the design team wanted the spirit of bathing and mystery to live on in the new hotel. The design is infused throughout with water; from the pool cantilevered above the rooftop, it flows out and rains down, cascading through the hotel in a series of interior channels; dripping down threads from which hang floating plants; drizzling in a 15m interior rainfall and eventually plummeting down to an underground waterfall in the heart of a hidden spa.

NEOBRIDGE is an experiment on the relationship between the hotel and the city. The “bridge” is the theme and the solution. The Origin. The project is located at Caojiadu, Shanghai, with St. Michael’s Cathedral in the front and a residential garden facing Suzhou Creek in the back. The team's goal was to create a comfortable but dramatic space in between two high rises while keeping the building’s original massing and form unchanged.

Yibin is one of the earliest and oldest cities on the upper reaches of the Yangtze River and was called "Bo, "Rongzhou" and "Xuzhou", which is well-known as Southwest Half Wall Ancient Rong State. "Source" is the root of all things. Similarly, the root of No.10 Bamboo Lodge is bamboo, which is the beginning. The processed bamboo was made into sheets, strips, and plates, after that, the bamboo is cooked at high temperature and soaked in lime water, then, it was dried in the shade naturally.

This project creates a new standard for capsule hotels. The business model called the capsule hotel first began in Japan specializing only in offering cheap stays, and the comfort of their lodging spaces have long been overlooked. As a result, the team designed a completely new form of capsule hotel that reinvents its conventional image and pursues functionality while simultaneously providing a rich experience.