Two Russian guided-missile cruisers from Russia’s North and Pacific fleets met off the coast of Syria as part of a 16-ship Russian Navy formation, according to satellite photos taken on Thursday.

“This is the concentration of essentially the entire Russian Navy in the Mediterranean, in one place. Ordinarily, these vessels would be operating in distinct groups,” reads the report from Naval News.

Russian Navy ships off the coast of Syria on Feb. 24, 2022. Naval News Graphic by H I Sutton used with permission

The two Slavas had been operating at either end of the Mediterranean as the head of two separate surface action groups. A third Slava, RTS Moskva (121), is in the Black Sea.

The 11,500-ton Slavas were designed around launchers that can hold 16 SS-N-12 Sandbox anti-ship cruise missiles – each about the size of a telephone pole. The 1970s era ships and missiles were crafted to battle U.S. and NATO aircraft carriers by overwhelming them with a barrage of high-speed cruise missiles to sink ships. 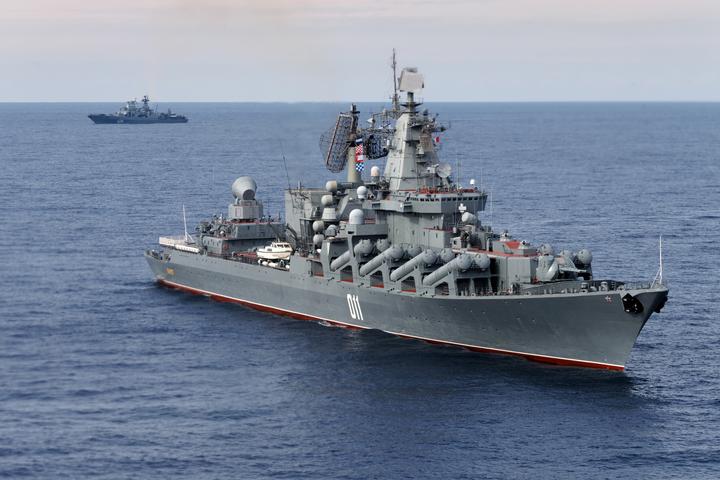 The formation resembles a photo exercise rather than a military formation. PHOTOEXs, held by navies around the world, are designed to produce dramatic photographs of ships in naval formations that otherwise have limited operational value.

While the operations of the Slavas are in part to send a provocative message to NATO forces, officials say, the actual capabilities of the Russian surface fleet in the Mediterranean are outmatched by just U.S. assets surged to the region.

On Tuesday, defense officials confirmed the intent of the cruisers was likely to complicate the operations of three NATO carrier strike groups also operating in the Mediterranean

USS Harry S. Truman (CVN-75), ITS Cavour (CVH-550) and French Navy carrier FS Charles de Gaulle (R 91) their escorts and air wings have been part of an ongoing reassurance mission to NATO allies in the lead up to Thursday’s invasion.

There are about a dozen U.S. guided-missile cruisers and destroyers in U.S. 6th Fleet, and some surged to the region with the last two months.

Those ships are in addition the forward-deployed USS Ross (DDG-71), USS Roosevelt (DDG-80), USS Porter (DDG-78) and USS Arleigh Burke (DDG-51), and the escorts of the Harry S. Truman CSG.

Last week, Chief of Naval Operations Adm. Mike Gilday said the U.S. Navy was well prepared to interact with the Russian Navy in the region.

“We operate in and around the Russians and the Chinese all the time. So this is nothing new,” he said on Friday when asked about the Russian cruisers by reporters.“Given this current situation, the chance for miscalculation is greater. That’s why we train to a very high standard so that when we find our ships in situations like this the [commanders] that we act in a way that’s not provocative and that we communicate very clearly that we’re not cowboys out there. Our intentions are to be responsible professionals out there.”

It’s unclear the next moves for the Slavas. The last surface action group to visit the Russian naval base in Tartus resupplied their ships and traveled into the Black Sea in support of the Russian invasion of Ukraine.