ShelterBox confirms emergency relief to be sent to Yemen

CORNWALL-based disaster relief charity ShelterBox says it will be starting to distribute emergency shelter in the war-torn Arabian peninsula country of Yemen next month after flash floods have brought further devastation.

The charity, which has launched a Yemen fundraising appeal, is supporting people who have fled from the bitter civil war that has left people homeless.

Families seeking refuge have been uprooted time and time again by shifting frontlines in a civil war that has dominated the country since 2014. They’ve had to leave behind homes, livelihoods, possessions and loved ones – often more than once.

Worse still, heavy spring rains have caused severe flash flooding for the last two years and families fear it could happen again – against a backdrop of coronavirus and the spread of diseases like cholera and malaria.

Father-of-five Ahmed was forced to leave his home after it was destroyed by heavy rain.

He says: “We are still suffering. We are four families in one tent due to rains and floods. If the weather is cloudy or windy, we feel anxious and worry for what is going to happen later.”

Like Ahmed, mother-of-three Eshraq’s first thought was how to save her children.

Eshraq, who also has to care for her husband who is sick, says: “Rain and floods came over and everything in my house was totally destroyed, everything has gone. We are still suffering. There isn’t place for my children to sleep, they sleep in the yard outside the tent. We have no place to go to. 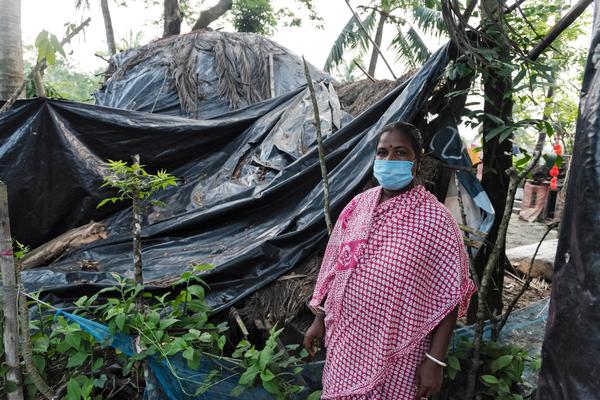 “We are suffering a lot. Our life is worse than any one can imagine, we just feel afraid and anxious.”

Whole communities have been caught in a cycle of displacement, fleeing their homes to a place of safety only to be made homeless again as the frontline moves or extreme weather sets in. Sea, land, and air blockades made it almost impossible to send aid for many years. Two thirds of the entire population need humanitarian support and most people who have been displaced have been away from home for more than two years.

“Yemen’s people live in a silent crisis with a growing conflict and a humanitarian emergency largely forgotten by the world,” says ShelterBox Chief Executive, Sanj Srikanthan.

“Families in Ma’rib are living in makeshift shelters made of sticks, palm branches, rags and anything they can find. Camps are overcrowded, which means diseases spread quickly and people have no way to protect themselves. People are fearful of the conflict, fearful of more flooding, and our emergency shelter aid is needed right now.

“It will shield people from the rain, it will give families safe drinking water and help protect them from COVID-19 and disease.”

Since the conflict intensified in 2021, Ma’rib - once a safe haven for people who had to flee their homes - is becoming less safe. People are moving within the region, which is already home to the highest number of displaced people in Yemen, to find safety.

Aisha lives in a displacement camp in Ma’rib with her family.  She said: “The conditions are very difficult. We live with our relatives because we left everything we owned in our house in Shabwa, which we were able to establish over three years and we lost it in two days, to be displaced only with our clothes that were on us.”

ShelterBox Programme Manager for Yemen Lucy Greenwell says: “Tents provide shelter for those with little choice but to sleep in the open and when you give families living in makeshift shelters tarpaulins and ropes, they can make it more resilient to the weather.

“Water filters, kitchen sets, and mosquito nets can save lives. It means that the food families prepare, and their drinking water is far less likely to make them sick.

“Masks, washbasins and soap help stem the spread of coronavirus and the fact that they can stay in their own secluded shelters means a family can socially distance and be together away from others.”

ShelterBox says it cannot solve this huge humanitarian crisis, but it can help people build safer spaces for their families and protect themselves against diseases. More information about ShelterBox and how people can support its Yemen Appeal can be found on the charity’s website, shelterbox.org.