By Gemma Parry For Mailonline

A teacher who allegedly dragged a primary school pupil along the floor as she tried to get them back into the classroom said she felt 'ashamed' after 'pulling the youngster on their knees'.

Rachel Wadsworth was accused of leaving the student 'terrified' during the incident at a school in South Lanarkshire, Scotland in December 2017.

She has now partly admitted the allegation to a panel at the General Teaching Council for Scotland, who are investigating her actions, building in Edinburgh.

Miss Wadsworth claims she was holding the pupil's arm to encourage them to come back into class and that pupil was 'pulled to their knees' during this. She added that she didn't realise the pupil was being pulled along as she was 'distracted' by what was going on in her classroom.

She admitted that she was 'too eager' to get back to the classroom and was 'walking too quickly' at the time, and said she felt ashamed after realising what had happened. She apologised to the pupil afterwards.

She has also been accused of making the same pupil sit in a seat she had urinated on.

If the panel finds against her, she could be struck off from teaching for two years.

Speaking to the panel earlier this week in relation to the allegation of dragging the pupil, she said: 'I admit this in part, but there was no violent element to it.

'Mrs Dougall [a support teacher] was supervising Pupil A at the sink. I heard a thud and I sent Pupil D with another pupil to go to the office.

'Pupil A ran out of the class. I took Mrs Dougall and went and got Pupil A.

'In the corridor I told the three pupils to stop and when they did I told the other two to carry on to the office.

'I told Pupil A not to not to go with them, then they collapsed to the ground. I took their hand, they needed a bit of encouragement to come back.

'I told them 'up' and that it was time for yoga. They crawled towards the class with me holding their hand.

'For five seconds my attention was diverted to what was happening in the class. I took a few steps forward and I heard them against the floor.

'Mrs Dougall said 'you can't do that. I surmised that I walked with the child about one foot.

'On reflection I was too eager to get back to the class and I was walking too quickly. 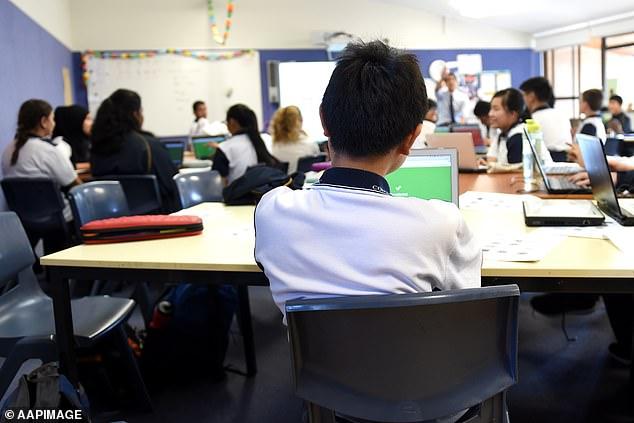 She also told the panel she did not feel ready to take on her role at the school due to a 'lack of experience.'

'I initially declined the role because of my lack of experience,' she said. 'I felt pressured to take the role in the class.

'When I first started the class management directed me to make changes after the way the class was previously run. Particularly after support staff raised the issues at a meeting.

'Being a new teacher, I would have much preferred to carry on the way things were.'

She spoke about the difficulties she faced working with support staff in her class and said that she felt she and her colleagues 'never got into a groove.'

'They recommended we have a group [chat] to share ideas in order to have a collaborative approach,' she said. 'I was met with real reluctance to give out phone numbers.

'I understand that I only knew them for a few months, so I suggested Facebook Messenger.

'I felt from the beginning it was an effort. I never felt that we got into a groove.

'We struggled to be on the same page, but we all wanted the best for the children.

'I felt very critiqued and that I always had to be on my toes. It was very detrimental when they started going to management to complain about me.

'I felt that the additional support I was given was an additional burden.'

She added that she experienced 'gradual bullying' in her role.

'I also experienced a gradual bullying from the support staff, they would insult me personally and professionally,' she said.

'They refused to follow my requests. They were saying things like 'she's not capable' and making derogatory comments against the pupils.'

Richard White, a member of a church that Miss Wadsworth currently attends, spoke to the panel on behalf of her character.

'Rachel opened up to me and said she had always struggled to pick up on subtle humour with adults,' he said.

'I have taken on mentoring her throughout the year. She has a greater self-awareness on how her behaviour impacts others.

'Rachel's desire to teach is so strong it helps keep her motivated.

'I do not believe that she is trying to distort events, it would be out of character for her.'

The comments below have been moderated in advance.

The views expressed in the contents above are those of our users and do not necessarily reflect the views of MailOnline.

We are no longer accepting comments on this article.

Part of the Daily Mail, The Mail on Sunday & Metro Media Group