Where did the wild horses removed from Sand Wash Basin go? A Colorado state prison.

CAÑON CITY — Hundreds of horses, noses to the dusty ground, nibbled on alfalfa hay spread in thin rows across a wide pasture.

In one direction, the Wet Mountains jutted toward a bluebird sky. On the other, guard towers and tops of Colorado state penitentiary buildings, some encircled with loops of razor-tipped wire, loomed above the landscape.

Not much more than a month ago, the horses were wild, roaming the Sand Wash Basin in the far northwest corner of Colorado, near the Wyoming state line. They were herded by a low-flying helicopter and then hauled in semi trailers to Cañon City, to the grounds of the Colorado Department of Corrections, as part of a massive effort by the federal Bureau of Land Management this year to remove thousands of mustangs from public lands across the West.

The pens on the prison grounds in south central Colorado had only about 200 horses just a few years ago, so few that the BLM and the state Department of Corrections let their joint inmate horse-training program expire. Inmates still water, feed and shoe the horses, but no longer break and train them for riding. Now, as the federal agency is on pace to round up more than 10,000 wild horses and burros for the second year in a row, the pens at Cañon City are filled with 2,317 horses and officials are considering a restart of the program popular with prisoners.

More than one-quarter of the horses at the 120 acres of prison-complex holding pens are from the Sand Wash Basin, a rocky landscape of cliffs, sagebrush and juniper trees. After a two-week roundup in September, 633 stallions, mares and foals were moved to Cañon City.

BLM officials say the roundup was necessary after years of drought dried up the rangeland, which is also shared by elk, deer, sage grouse and domestic sheep. But mustang advocates — locals from Moffat County and others who came from across the country to witness the roundup — say it decimated one of the most beloved wild herds in the nation. About 70% of the horses were removed.

The Sand Wash horses, a colorful mix of grays and palominos, paints and bays, will remain in the Cañon City holding pens until mid-February, when the first of several adoption events will take place. Between now and then, wranglers will vaccinate the horses, geld the stallions and wean foals from their mares. About 20 inmates care for horses with daily feed and water, horseshoeing and rounding up horses for veterinarian checks.

The mustangs have started to gain weight after transitioning from eating scrub grasses to hay, and instead of traveling miles for water, walking to a trough inside their pasture. Those that aren’t fattening up are separated from the large herds and given more food. Horse groups that argued for leaving them on the wild range said the Sand Wash herd was in decent physical condition even in the wild, however.

“When they come off the trucks, they look skinny,” said Alex Cockrell, a minimum-security inmate at Cañon City who has cared for mustangs for a couple years. “Then you see them put on weight, start to mellow around people.”

Just one horse has been euthanized since the animals arrived in Cañon City. The horse was beloved by mustang advocates who volunteered to help the herd in the wild, some hauling in water during severe drought, and who had named all almost 900 mustangs in the basin. The stallion, called P.J. for Picasso Jr., was the son of the most famous of all the Sand Wash horses, a multi-colored stallion named Picasso who is presumed to have died of old age in the winter of 2019.

P.J. had cancer of the eye, which a veterinarian determined had spread to his bones.

The stallion was on a list of 50 horses that a group called SWAT — the Sand Wash Basin Wild Horse Advocate Team — wanted to remain in the wild, in part to help maintain generations of blood lines. When P.J. was captured during the helicopter roundup, federal officials refused to release him because of the cancer in his eye. The horse advocacy group then asked the BLM to place P.J. in a sanctuary, but he was euthanized in Cañon City a week ago.

BLM officials at the Cañon City holding facility this week said they hadn’t decided the fate of other horses on the mustang advocacy group’s list for sanctuary, including a small black stallion named Licorice and another descendant of Picasso, a brown-and-white stallion called Michelangelo. Advocates argue that Michelangelo should return to the rangeland, since federal officials took P.J.

Steve Leonard, who is the BLM’s state wild horse and burro specialist and the manager of the Cañon City facility, said he’s received so many calls and emails about the Sand Wash horses that he can’t keep up with them all. A veterinary report last week, a copy of which was provided to The Colorado Sun, said the vast majority of the horses were healthy, with only a few animals at the prison complex that were too skinny.

But mustang advocates said they are frustrated that they have not been allowed to see the Sand Wash horses since they were removed from the range, where various groups set up cameras and reported daily on social media about which horses were captured. Some said they’ve tried to check on the horses from afar, driving on private property at the edge of the prison complex. 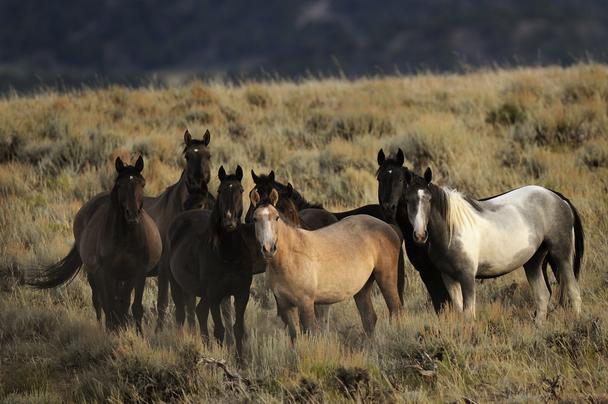 The concerns stem from previous deaths of horses at Cañon City and at BLM holding pens in Rock Springs, Wyoming. Ten horses were euthanized shortly after the 2020 roundup in Wyoming’s Red Desert, seven of them because of preexisting conditions and three that were injured, including one with a head fracture from being kicked by another horse. Then 24 more horses died while in holding pens in Rock Springs and Cañon City, according to data gathered by the American Wild Horse Campaign. Causes of death include starvation, injuries and colic.

Two Sand Wash horses were euthanized shortly after capture because of what federal officials say were health issues that existed before they were gathered up and herded into holding pens, including a foal with a neurological problem.

The national horse group “has serious and well-founded concerns regarding the condition and treatment of wild horses housed at Cañon City holding pens,” said Suzanne Roy, the horse campaign’s executive director. “The brutality does not end with the roundup, and wild horses and burros continue to suffer and die in holding facilities after they’re captured.”

On the prison grounds, Sand Wash horses are together, with stallions in one pen and mares and foals in another. The Sun was allowed to see the horses during a pre-arranged media tour and while accompanied by BLM and state correctional officials. Several hundred horses were visible, both from the Sand Wash Basin roundup and the West Douglas gather north of Grand Junction in August where 457 mustangs were captured.

Horses from Wyoming’s Red Desert range, where the BLM gathered nearly 2,000 horses in 2020, were in other holding pens on the prison complex that were too far away to see from where prison and BLM officials brought journalists.

The visit was the first time in years that journalists saw the prison complex horse pastures. As for other public visits, the BLM’s Leonard urged wild horse advocates to have patience.

“This is a prison,” Leonard said. “Public tours do not occur within a prison.”

Preparing the horses for adoption will begin this month, after the animals have had a few weeks to settle into their new surroundings. Fewer injuries occur during gelding and pushing the mustangs to smaller pens for vaccinations when they’ve first had time to settle, said Leonard, who has been overseeing the holding pens since 2015. “There’s not a lot of fighting going on,” he said, as the horses grazed on piles of alfalfa hay, only an occasional dustup in which a mare pinned back her ears and kicked another horse, resulting in a squeal.

Each animal gets a “freezemark” on its neck, a brand that includes a combination of numbers that designates its original home. Leonard expects a high demand for the Sand Wash horses, known for their variety of color and long-appreciated by photographers, when the auctions begin early next year.

Horses not suited for adoption because of old age or health conditions will go to long-term pasture, shipped to farmland and ranches across the country that will board them until they die.

Cockrell and another minimum-security inmate, David Jackson, who both spoke to The Sun during a tour of the horse pens and in front of prison officials, said they begin feeding and watering the horses each day about 7 a.m. They arrive at the barn in their green prison jumpsuits, then switch their shoes to cowboy boots and put on black cowboy hats.

The job is a coveted one at the prison, even above heavy machinery operation and farming in the corn fields and vineyards. Jackson, who hopes to earn parole next year and become a farrier, called the job a “stroke of luck.” He comes to work every day, even if he’s sick, he said. “It feels so much better to be out here.”

After a busy summer of “emergency” roundups, the BLM has no more scheduled gathers in Colorado this year. The next Colorado wild horse gather is likely to occur near Meeker, in the Piceance-East Douglas herd management area, where an estimated 850 horses are roaming land that federal managers say is appropriate for about 235.

In Wyoming, the largest wild horse gather in history began last week, another helicopter roundup of horses near Rock Springs in southwestern Wyoming. BLM officials said they intend to decrease the horse population in the area from an estimated 5,105 mustangs to no more than 2,145.

A recent case study shocked psychiatrists across the country and added fuel to a long debate about whether right-to-die laws would lead to state-sanctioned deaths of people with mental illness and disabilities. >> READ

We believe vital information needs to be seen by the people impacted, whether it’s a public health crisis, investigative reporting or keeping lawmakers accountable. This reporting depends on support from readers like you.