About half of Montana schools that had tested their water by mid-February under a new state rule had high levels of lead, according to state data. But the full picture isn’t clear because less than half of the state’s school buildings had provided water samples six weeks after the deadline.

For many schools with high lead levels, finding the money to fix the problem will be a challenge. The options aren’t great. They can compete for a dwindling pool of state money, seek federal aid passed last year, or add the repairs to their long lists of capital improvement projects and pay for the work themselves.

“We prioritized emergency needs and then will follow up with the next-most-serious thing,” said Brian Patrick, Great Falls Public Schools’ director of business services and operations. “Obviously, this is something we want to get addressed right away. We want safe water for our kids.”

Lead, a toxic metal long known to cause lasting organ and nervous system damage, can make its way into drinking water through pipes and fixtures. Children are especially vulnerable to lead poisoning, which can slow development and cause learning, speech, and behavioral problems. Although federal rules require that community water sources be tested for lead, schools have largely been free from that oversight and can decline to be tested

The rule in Montana, created by the state Department of Public Health and Human Services in 2020, requires schools to check at least every three years for lead in the water of any sink or fountain used for drinking or food prep. Schools’ initial deadline to get that done was Dec. 31, 2021.

According to the rule, any faucet whose water has a lead concentration of 5 parts per billion or higher must be fixed or routinely flushed. Fixtures that test higher than 15 ppb must immediately be shut off.

There is no safe level of lead,” said health department spokesperson Jon Ebelt. “And that is why schools, DPHHS, and [the Department of Environmental Quality] are taking actions to remove sources of lead in children’s environment.”

The American Academy of Pediatrics recommends that school water fountains not have water lead concentrations higher than 1 ppb, according to a 2016 policy paper.

State officials have said 589 school buildings need to meet Montana’s new rule. Of the 222 schools that had turned in samples by Feb. 18, 110 had at least one water fixture with lead levels higher than 15 ppb, according to a KHN analysis of state data. Almost a third of all fixtures tested so far across the state had dangerous levels of lead in their water, according to state data.

The highest test result so far came from Skyview High School in Billings, where a sink in a theater control room tested at 7,800 ppb — federal environmental regulators classify lead concentrations over 5,000 ppb as hazardous waste. That sink and any other that had levels higher than 15 ppb were blocked off from use, said Scott Reiter, director of facilities at Billings Public Schools.

Montana’s rule mandates that schools’ results be publicly posted but doesn’t require schools to tell parents when students have been exposed. For many Montana schools, this is the first time they’ve tested for lead.

In some cases, schools with a long list of high lead numbers must wait for solutions, with some sinks and fountains blocked from use. At Billings West High School, more than 40 fixtures tested in the red — higher than 15 ppb — out of 139 samples taken. As of mid-February, repair work hadn’t begun at Billings West as district officials prioritized projects that keep access to drinking water for students and employees in other schools, whether that’s applying filters or replacing fixtures.

“We're just taking it one school at a time,” said Billings Public Schools Superintendent Greg Upham. “In some cases, it will fall to our general funding facilities budget, which is unfortunate, but, you know, on the safety side of it, that's what we need to do.” 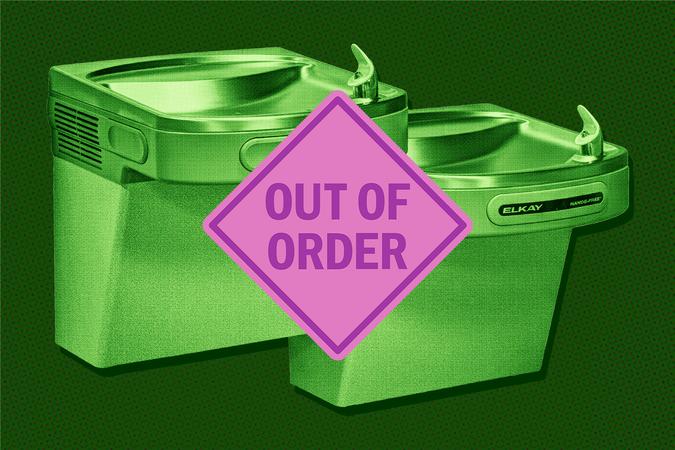 “This rule rolled out right as COVID-19 hit,” Montgomery said. “And schools have also had a lot of turnover. I'll get calls from new facility people saying they just heard about the program and how do they get started.”

Although DEQ helps oversee the program, the rule’s enforcement falls to DPHHS. Ebelt said the deadline was set before the pandemic and COVID-19 slowed that work for many schools.

He said a total of 308 schools had submitted an inventory of their buildings’ plumbing fixtures and more samples had been coming in. As of Feb. 28, 293 schools had provided samples. Not all results have been posted.

“We plan to be flexible with the deadline and will continue to work with schools,” Ebelt said.

Classroom and bathroom sinks were more likely than any other type of fixture to have high levels of lead. Of all the drinking fountains tested, 20 percent tested high enough to need flushing or get turned off, according to state environmental officials. Schools don’t have a deadline to make repairs, though some have taken anything whose water tested over 5 ppb out of service.

Nationwide, no one has tracked how many lead pipes deliver water to homes, schools, and businesses, let alone tested every faucet for traces of the neurotoxin. At least seven states — California, Illinois, Louisiana, Minnesota, Missouri, New Hampshire, and Virginia — require school districts to test for lead and report elevated levels to parents, according to the National Conference of State Legislatures.

Last year, Washington state mandated that schools test drinking water for lead if the buildings went up or pipes went in before 2016. And in 2020, Virginia lawmakers instructed school boards to submit plans to test for lead and to make fixes if needed.

Patrick, with Great Falls Public Schools, said that in some cases, the district brought in water bottle fill stations with filters to replace old hallway drinking fountains. The district already had plans to use part of the proceeds from a bond issuance to replace the internal piping at Lewis and Clark Elementary School, where 23 fixtures had lead levels of 5 ppb or higher.

He said that the district had considered testing in the past but that the estimated cost was too high. With the new rule, the state covers the cost of lab tests and supplies for taking samples.

However, if repairs are needed, many schools may be left to foot the bill themselves. The state set aside $40,000 to help schools fix problems, but that money is first come, first served. As of Feb. 18, about $15,000 remained.

Patrick said that as schools calculate total repair costs, they’re submitting that information to state officials. He hopes that more than $40,000 will be set aside for repair projects the next time schools submit samples. For now, the gap in funding may mean delaying other projects.

“It just means a project that we're going to do, like re-asphalting part of a playground or something like that, gets postponed for another year,” he said.

The bipartisan infrastructure bill that Congress passed late last year included $55 billion to expand access to clean drinking water. But the money hasn’t been disbursed to states yet, it’s not limited to school repairs, and how much of that funding will land in Montana isn’t clear yet.

Montgomery, of DEQ, said that if schools don’t have the money to make fixes, some may qualify for rural development grants or low-interest loans.

In Troy, 27 of the 58 water fixtures tested at the elementary school came back above the state’s allowed limit of less than 5 ppb, with five in the red. The rural school district now faces the cost of repairing those water sources after incurring the hidden cost of the staff time it takes to inventory and sample every water source — no small expense for a small district with limited cash and workers.

“We're just going to chip away at it with the general funds that we do have, and there may be some areas that we just shut down different water sources too,” said Jacob Francom, superintendent of Troy Public Schools. “Fixtures are very expensive — and testing regularly, I mean, it starts to add up.”