EAST LANSING -- Four minutes into Friday’s Division 2 girls basketball semifinal against Detroit Edison, Ludington has still not so much as attempted a shot from the field.

The Orioles had six possessions up to that point, and turned the ball over six times.

That defense continued throughout the night for Edison in a 63-30 Pioneers win.

“[We were] pressuring the ball,” Edison sophomore guard Devin Hagemann said. “At the timeouts we had to adjust to picking up the screens, that’s where they score the most points, so I would just say talking on defense.”

That pressure led to 30 total Ludington turnovers in the game,of which were Edison steals.

“It’s kind of like a leaky faucet,” Ludington coach Warren Stowe said. “That’s what we try to do to teams on the west side of the state is just put that type or pressure on, and it just wears on you. In the first half I thought we did a really good job of battling and trying to handle it.”

Edison (18-3) was putting pressure on passing lanes, which knocked Ludington out of its rhythm and also allowed the Pioneers to get out in transition, as Edison scored 23 points off turnovers in the first half alone.

“They were trying to get the ball and I just had to be strong with the ball and look for the open pass,” Ludington forward RyAnn Rohrer said. “Sometimes it looked like it was open and it actually wasn’t.”

Much like in the quarterfinal on Tuesday where she had three points through three quarters in a win over Portland, Miss Basketball Ruby Whitehorn was not much of a factor scoring early on. Her layup put the first points on the board, and she added a putback just before halftime to put Edison up 32-19, but did not score in between.

But like she did in the quarterfinal, Whitehorn contributed in plenty of other ways. She dished out assists on back-to-back first-quarter baskets by Wardell and Hagemann. In nine minutes in the first half she was limited to four points, but she also had eight rebounds, five assists, a block and two steals.

“The past few games I’ve learned to keep my attitude in check,” Whitehorn said. “My teammates really have my back. It took me a little bit this season to get that in my head. I get real hard on myself when I’m not scoring. But when I get an assist I feel like I’m scoring with them. Today I was just happy to be playing and happy to have faith in my teammates.” 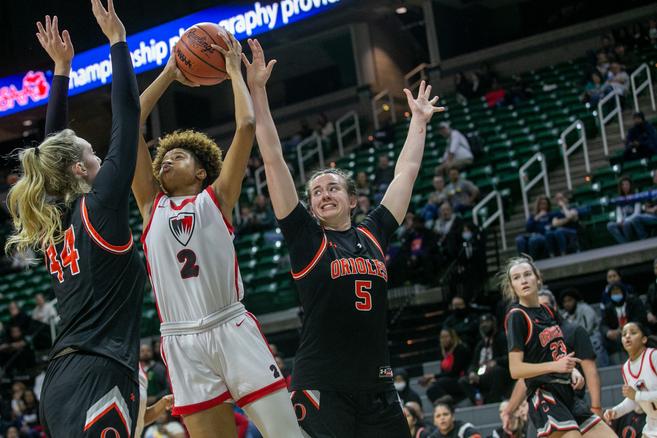 Whitehorn started to get the points to come in the second half. She finished with 18 points on 8-for-14 shooting with 12 rebounds (10 of those on the offensive end) and seven assists.

“I just love to rebound,” she said. “When you get a rebound, you look real tough, so it’s my favorite thing to do.”

One of her assists came on a Hagemann 3-pointer, which made it a 13-0 game early on.

Ludington (20-6) started to rally after that. Keelyn Laird, while falling down, fed Olivia Lynn for a basket with 3:42 to go in the first, Ludington’s first points of the game.

After Rohrer added a basket, a 3-pointer from Annie Kline got the deficit down to single digits.

Down 17-9 after one quarter, the Orioles were within a point early in the second on back-to-back baskets from Rohrer and another from Laird to make it 17-16 Edison.

“We’ve had games, like we played Standish-Sterling [in the regional semifinal] and they were up 8-0, and we’ve had games where we’re down the whole time,” Rohrer said. “I think that we’re calm and we knew our basketball ability is there and we just had to get shots. Basketball is all about runs.”

But the Pioneers responded with a 13-1 run, fueled again by defense. Ludington turned the ball over six times in the span of seven possessions, with Wardell and NaKiya Bonner grabbing steals.

Rohrer added a basket on the first Ludington possession of the third quarter, making it a 32-, but the Orioles’ next 14 possessions resulted in nothing, shooting 0-for-7 from the field and turning the ball over eight times, with Whitehorn and Wardell each grabbing a pair of steals.

On the other end, Edison got a Wardell-to-Whitehorn alley-oop, a Whitehorn-to-Bonner feed for a basket in the paint and a Hagemann 3-pointer, building a 49-23 lead after three.

Wardell finished with 10 points. Bonner and Hagemann each had eight.

Rohrer had 15 points and seven rebounds for Ludington while Laird added seven points.

Edison will meet Grand Rapids West Catholic in Saturday’s Division 2 championship game, a chance to re-capture the state-title trophy after having the 2020 and 20 campaigns cut short by COVID.

“I’m just really happy to make it this far at least,” Wardell said. “We’ll play it game by game, so tomorrow if we win I’ll be really happy to leave with a state championship, my second one.”

Note to readers: if you purchase something through one of our affiliate links we may earn a commission.