MIDDLETOWN – With the environmental impact of wind farms off the coast of Monmouth County still unknown, three entities in the Township of Middletown are doing their part to encourage sustainability by embracing solar power – and reducing electricity costs in the process.

A little over a year ago the township applied to the NJ Board of Public Utilities (BPU) to build solar canopies in the train station parking lot off Church Street using federal and state energy tax credits to pay for the project. Electricity created by the panels would help power two affordable-housing senior apartment complexes located nearby.

According to Tony Mercantante, the township administrator, Middletown will be putting in a new Request for Proposal (RFP) with the BPU during their next round of applications. “We are awaiting the BPU’s announcement of the next application date,” he said. That RFP will include development of the solar canopy project, Mercantante confirmed.

Meanwhile, both Brookdale Community College and Memorial Sloan Kettering Cancer Center have applied to and received approval March 2 from the Middletown Planning Board to complete their own solar canopy projects on their respective sites.

In Lincroft, Brookdale Community College plans to almost completely cover Parking Lot 6, in addition to portions of Parking Lots 4 and 5, with the solar canopies.

According to David M. Stout, Ed.D., president of Brookdale, the college has been interested in developing solar projects for nearly 15 years. “Up until about maybe five years ago, we’d been looking at solar panels for the rooftops” of campus buildings, he said. But they could never find the right partner.

Stout said they were trying to keep solar panels “tucked away” on rooftops so as not to distract from the bucolic nature of the campus. “The campus is really beautiful and we wanted to make sure that we preserve that beauty,” he said. “So initial thoughts were that canopies were really going to obstruct that beauty.”

But a consulting group explained that none of the rooftops were really suitable for solar panels.

According to the permit packet submitted to the planning board by Miller Bros. on behalf of Brookdale, “solar canopies are elevated structures that host solar panels while providing shade at the same time.”

They are appropriate and effective for large parking lot areas, walkways and other already paved areas. Corporations, schools and medical facilities which typically have large paved areas can see benefits in reduced electric bills. 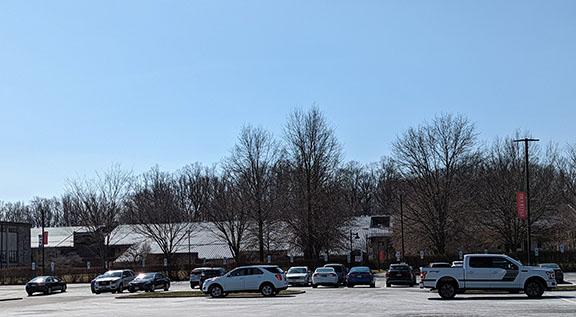 “While we’ve really wanted to be more environmentally friendly – we’ve wanted to be more green – part of our strategic plan has been to bring down the overall cost of education for our students,” Stout explained. Brookdale has looked at ways to lower expenses and “utility costs were certainly one of the things that we’ve been trying to reduce,” he said.

In addition to cost savings, solar canopies provide many other benefits, according to the permit application, including protecting people and cars from the elements and providing shade for cars which in turn can improve fuel economy by reducing the need for air conditioning in warmer months.

Doubling down on the green effort, some of the canopies will also feature electric vehicle charging stations.

“Assuming that we don’t run into major supply chain issues, the plan is to have everything installed over the summer and actually functional by the time we start our fall semester,” Stout said.

Meanwhile, at the Memorial Sloan Kettering Cancer Center (MSK) off exit 114 of the Garden State Parkway, sustainability has been a key element in the design of all the medical center’s buildings. “We’re driving energy efficiency projects and operations and pursuing renewables” all the time, said Jennifer Silkowitz, energy and sustainability manager for MSK.

“The MSK Monmouth facility in Middletown is LEED Gold-certified. So in the original design of the building, there was a lot of sustainability and environmentally friendly aspects built into the building,” explained Jonathan Golding, associate director of plant operations for MSK. Those included eco-friendly fixtures like low-flow faucets so the building uses less water and LED lighting systems that turn off automatically when no one is present.

Silkowitz said the canopies are “just one additional way to reduce our greenhouse gas emissions and environmental impact.”

Even though the project is in the early stages of development, she said they are “excited that it was recently approved by the local township.”

According to Golding, this will be the first canopy project at an MSK facility. “One of the reasons why Middletown was chosen is because we have a larger parking footprint than most of the regional sites,” Golding said. The canopies will cover the larger staff parking lots, not the patient parking lots.

While still in the design phase, Silkowitz said they expect the solar panels to cover a portion of the facility’s electric demand.

Golding said the target for bringing the canopy project to fruition is the end of 2022, but that timeline is “dynamic based on what we start getting into now that constructions is a go ahead.”

The article originally appeared in the March 17 – 23, 2022 print edition of The Two River Times.