Plumbers say drip your faucets, but the city says don’t. What should you do?

The city, though, is telling Houston residents not to employ that strategy amid this week’s freeze. It says hundreds of thousands of trickling faucets can contribute to stress on the city’s water system, dropping the pressure to a point where Public Works potentially could be forced to issue a notice to boil water before using it. That happens when the pressure dips to a level that could result in contamination.

Houston Public Works Director Carol Haddock said the pressure was lower than normal Tuesday but still above regulatory thresholds that would require a boil notice.

Many residents were reporting a loss in water pressure Tuesday, and some reported brownish water coming out of their faucets and in toilets.

The conflicting guidance puts residents in a bind between self interest and communal interest: Follow plumbers’ advice and risk contributing to a wider problem with the city’s water system; follow the city’s advice and risk a burst pipe and the resulting repair costs.

“That’s a tough position,” said Paul Abrams, spokesman for the national plumbing company Roto-Rooter, which has offices in Houston and several other Texas cities. “I get where the city is coming from, but I doubt they're going to step up and pay for people’s damages if their pipes burst.”

He said trickling faucets is the best strategy to prevent frozen and burst pipes for residents without electricity or heat, as was the case Tuesday for many Houstonians. More than 1.3 million CenterPoint customers in the city remained without power as of noon, according to Mayor Sylvester Turner.

Residents, Abrams said, should let the water run just beyond a drip, especially on faucets that sit on exterior-facing walls. 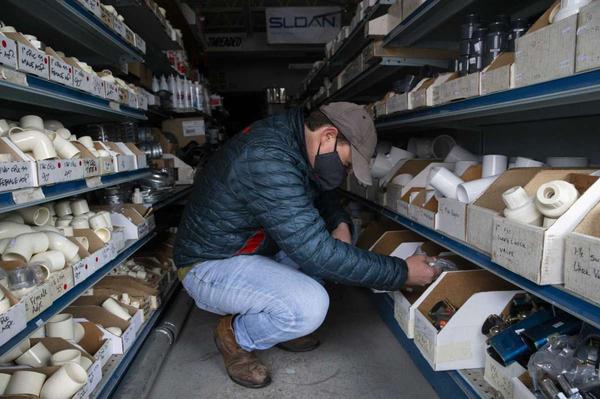 Some plumbers only recommend trickling faucets overnight or when residents leave their homes, when water otherwise is not being used.

“If it were a normal winter I would say overnight should be fine,” Abrams said. “But you guys (were) in single digits and going on a few days now. I think the best practice would be trickling at all times, especially if you have no heat in the house.”

It is likely unnecessary for people who have heat and are able to keep their homes above 55 degrees. Still, Abrams said the unusual nature of this weather in Texas makes that statement less reliable. Homes here have less insulation than more northern cities with colder climates.

“You don’t get do-overs once a pipe is going to burst,” he said.

Turner said the city is not withholding water service from any customer. If water is not being delivered in a home Tuesday it likely is because a pipe has frozen, Haddock said.

Houston’s water pressure also has been affected by power outages taking out pumps and pipes breaking underground as the ground freezes, according to Public Works.

“It’s going to be awhile before we catch back up to raising the pressures to what we normally see citywide,” Haddock said. “However, we are in good shape, staying above the regulatory thresholds at this point.”

It is not the only one. The cities of Baytown and Pearland issued boil water advisories Tuesday for all residents and businesses. The advisories, brought on by low water pressure because of power outages and frozen pipes, recommend customers boil water for two minutes before using it to wash or drink.