Eugene Heng, a campaigner and founder of the Singapore-based Waterways Watch Society, knows the travails of living with little water.

When he was a young man in the 1960s and the 1970s, dry seasons in Singapore could lead to water rationing, with people allowed to fill up a fixed number of buckets every day for weeks to make sure everyone could have access to water.

"We had to spend time bathing and cooking and to be mindful of how many scoops of water we were using because we had to share it with all the family,” he recalled in an interview with FairPlanet. "Once we used all of it, we had to wait for the next day to have more."

Such strict limitations are unfathomable for many younger Singaporeans, he added, because the city state has made significant strides since then, and its efficient system can now provide clean water at the turn of a tap for a population of about 5.4 million, more than twice as many people as those who lived on the island in the 1970s.

While back then Singapore mostly depended on supplies imported from Johor, Malaysia, over the following decades, it has strengthened its water services thanks to the Four National Taps, a comprehensive policy to supply water from catchment and desalination as well as imports and reclaimed wastewater, with recycling playing a prominent role because of its potential to provide a plentiful and sustainable water source.

“Since the 1970s, authorities in Singapore had the idea of producing water by recycling wastewater while increasing the number of reservoirs to collect more rainwater,” Dr Cecilia Tortajada, a water management expert and professor of environmental innovation at the University of Glasgow, told FairPlanet.

The political context provided a strong catalyst for Singapore to pursue the undertaking, as the city was looking to reduce its dependence on water imports, especially after it separated from Malaysia to become a sovereign state in 1965.

“A few days after Independence, the Prime Minister of Malaysia told the British High Commissioner, ‘If Singapore doesn’t do what I want, I’ll switch off the water supply.’ So I knew that unless I could become less dependent—at that time I did not believe I could be totally independent—on Malaysian supplies, I would always be a satellite. So the quest began for water independence,” Lee Kuan Yew, Singapore’s founder and first Prime Minister, said in 2008.

This quest led to the creation of 17 reservoirs (from three at that time) fed by a dedicated network of drains and a great deal of research on water recycling technology that culminated in the opening of the first reclaimed water plants in 2003. Over the last 19 years, the recycling process has been scaled up significantly and it can now cover up to 40 percent of the city’s water demand, according to PUB, Singapore’s National Water Agency.

Recycled wastewater is mostly used for industrial processes, especially in the water-intensive production of components for electric devices, but it’s also added to raw water in reservoirs during dry periods. This mix is then treated to make it potable and supplied as tap water, making the city more resilient should supplies from rain or imports drop. 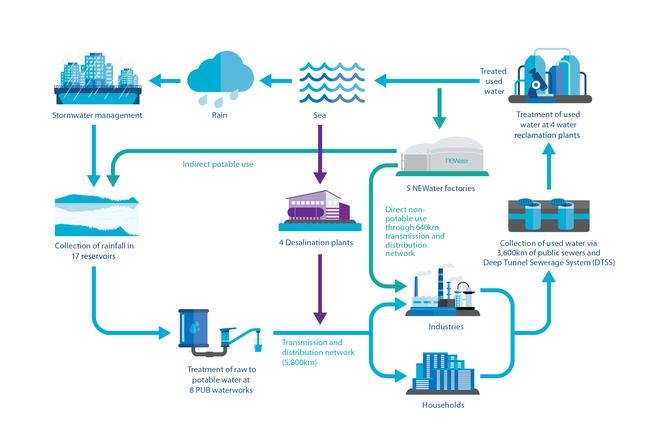 With non-domestic demand for water far outpacing domestic needs, reclaimed water is poised to become an even stronger pillar of water sustainability in Singapore. Non-domestic use now accounts for about 55 percent of the total water needs in the city, but PUB estimates it will grow up to 70 percent by 2060.

By then, recycled wastewater should meet up to 55 percent of total water demand, while the rest should be covered through catchment and desalination—another production method that is powering the quest for water independence but that requires a lot of energy - thus weaning the city off imports.

"Singapore has become one of the world leaders in recycling wastewater because authorities have planned how to implement it for a long time and invested large amounts of funds in research and technology," said Dr Tortajada, who believes the city will achieve the goal of using reclaimed water to cover more than half of its water needs by 2060 through further improvements that will allow to collect and reclaim a greater amount of wastewater.

The technology behind this success involves conventional wastewater treatment - including the removal of debris, sandy materials, organic and solid pollutants - followed by microfiltration and reverse osmosis to filter out microscopic particles, bacteria and viruses. As an additional safety measure, the water is then disinfected by ultraviolet light that can kill both bacteria and viruses. The result is high-quality potable water that has met the World Health Organization requirements for drinking water.

"The concern about recycling water has always been around health because if you don’t do it properly you could poison an entire city," said Dr Tortajada. "But a handful of cities have long implemented the system successfully without causing health problems, including Singapore, Orange County in the US, and Windhoek in Namibia."

These examples show that recycling could help many areas become more resilient in the face of water scarcity - a global problem that is being exacerbated by pollution, climate change and growing populations - strengthening the availability and sustainable management of water and sanitation for all, one of the UN Sustainable Development Goals.

But that doesn’t mean every city should switch to water recycling without drawing up a comprehensive plan, as this could lead to unfair distribution or environmental problems.

"If a city abstracts water from a river and recycles it without discharging its treated wastewater into the river, then other cities downstream as well as the ecosystem could be left with little or no water," explained Dr Tortajada.

Recycling is then a viable solution for places with limited water resources like Singapore, where it contributes to sustainable water supplies for the entire community that depends on them without affecting the environment.

In addition to creating more water sources, Singapore is edging closer to sustainability by cutting down the demand for water. "What you are doing with better catchment, recycling and desalination is to supply more water, but you can’t continue supplying more of it forever," she said.

That’s why PUB has been promoting water saving through awareness campaigns about the value of water, including water rationing exercises at schools and encouraging households to reduce consumption by installing water-efficient devices and suggesting tips like ensuring the tap is off when brushing teeth or soaping up in shower. These efforts seem to be paying off as per capita household water use decreased from 165 litres per day in 2013 to 141 litres in 2019, with the goal of cutting it down to 130 litres per day by 2030.

Similarly, PUB has worked with several industries for years to help them become more efficient, and there are now some large companies that buy only reclaimed water or even recycle their own water.

Local initiative and challenges ahead

These achievements are also driven by the groundwork of non-profits like Waterways Watch Society (WWS), which was established by Heng in 1998 to rally volunteers to keep Singapore rivers clean - an important step not only to protect the environment but also to maintain reservoirs suitable for producing drinking water. Over the years, WWS has also increasingly supported water education to shed light on the risks that lie ahead.

"We do a lot of awareness programmes with school kids and corporate people to educate them not to take water for granted, understand where our water comes from, and the impact we have on water quality if our behaviour is irresponsible, because what is thrown in the drain comes back to us tomorrow as drinking water," he said.

Economic and population growth as well as potential reduction in rainwater and imports from Malaysia could put a serious strain on water supplies in Singapore, he added, making it crucial for the whole community to avoid wasting them.

"I try to use the bare minimum of water because we all have to learn to conserve it if we want sustainable water supplies."